India needs external capital to grow. This has been true since the early years of Central planning following independence when India relied on external debt raised mostly by its Central and state governments from foreign governments and multilateral agencies (like the World Bank). Until the liberalisation of the economy in 1991, few Indian companies were able to do so. In the 1990s, these companies finally began to raise external equity and debt capital, mostly through Global Depositary Receipts (GDRs) and Eurobonds. After the first Indian companies were listed on stock exchanges in the United States in 1999, equity funding took the form of American Depositary Receipts and Foreign Portfolio Investment. In parallel, Indian companies raised debt through External Commercial Borrowing (ECB), mainly in Eurobond markets.

Since then, the ratio of external debt to GDP has grown steadily and touched around 20 per cent ($563.9 billion) in March 2020. Of this, a large fraction (38.8 per cent) is ECB debt, regulated by the Reserve Bank of India (RBI) and the Ministry of Finance (MoF). In particular, the RBI closely monitors pricing and quantity of ECB debt to ensure that external indebtedness stays within limits. At present, the cap on the interest rate ("all-in cost") for Indian companies is the benchmark rate, that is, the London Interbank Offered Rate (LIBOR), plus 450 basis points (4.5 per cent), equivalent to about 5 per cent in USD for floating rate debt. This compares favourably with their domestic rupee cost of borrowing, even after considering the potential depreciation of rupee against USD, or hedging costs. Most of the highest-rated Indian companies such as Reliance Industries, State Bank of India and ICICI Bank Ltd. have been able to borrow at much tighter spreads - at all-in USD interest rates as low as 2.3 per cent on average - as recently as February 2020. 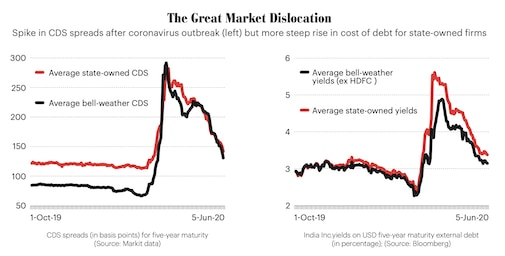 Under normal circumstances, these spreads reflect and compensate lenders for the credit risk they bear while lending to the best Indian companies - currently rated by global rating agencies (S&P, Moody's, Fitch) at the lowest investment-grade level (BBB- from S&P) or a notch higher, on the international scale. However, the Covid-19 pandemic has dislocated global credit markets and, as we discuss next, these spreads have significantly widened since then.

Dislocations are an important, yet not fully understood, source of risk in financial markets when they are under extreme duress. Much academic research shows that in those arguably uncommon circumstances, markets cease to price financial assets correctly, often creating gaps between the prices of identical assets, thus the popular label, "dislocations." These gaps are not supposed to occur materially in well-functioning markets and they usually do not during normal times. Yet, when these gaps do occur - during times of turmoil and instability - they wreak havoc, especially in global derivatives markets, which are dependent on accurate relative pricing.

Dislocations have been plaguing domestic and international markets for currency, stocks, bonds and commodities for decades. However, only in the aftermath of the default by Lehman Brothers in 2008 and the ensuing global financial crisis did market participants finally become aware of their importance. Unfortunately, it appears that many of these markets are dislocated today, in the midst of the Covid-19 pandemic, with potentially devastating effects for the Indian economy, already ailing from the shutdown and the global recession.

How severe is the dislocation? Let us look at the market for external debt, on which many Indian companies are reliant. A traditional measure of credit risk of these companies is the spread over LIBOR that they have to pay to borrow in ECB markets. A novel and increasingly important measure of this risk is cost of insuring these companies' debt against default. These insurance contracts are traded in global financial markets in the form of credit default swaps (CDSs), and insurance premiums paid for protection against default are known as "CDS spreads." CDS spreads have become a crucial input in the determination of companies' cost of domestic and external funding. CDS contracts are currently available for many large Indian companies, including such well-known names as Reliance Industries, State Bank of India (SBI), ICICI Bank, Tata Motors, and Tata Steel. Hence, we can use their CDS spreads as a barometer for global market's perception of credit risk of India Inc.

Consider the following two sets of large Indian companies: First, private-sector bell-weather firms with credit ratings at or above the Indian sovereign (BBB- from S&P) like HDFC, Reliance Industries and ICICI (all at BBB- or higher); second, large state-owned enterprises with only marginally lower credit ratings like Indian Oil Corporation, National Thermal Power Corporation, Rural Electrification Corporation and SBI. Before the crisis, CDS markets deemed the first group less risky than the second - as captured by their five-year CDS spreads in the graph, moving together in a narrow range until just before the pandemic. Yet, starting in early March, and a few days into the pandemic, dislocated CDS markets suddenly dictated that both sets of companies had become several times more likely to go bankrupt, as measured by their CDS spreads. For instance, the average annual premium to insure $10 million of Indian bell-weather debt, for the five-year maturity, against the risk of default jumped from less than $80,000 on February 28 to nearly $300,000 on March 24. CDS markets also assessed that the bell-weather companies, with the highest ratings, had become, over that same period of time, nearly four times as likely to go bankrupt, while the risk for ex-ante riskier state-owned enterprises had only more than doubled, perhaps due to their implicit sovereign guarantee.

These sharp swings in perceived absolute and relative credit risk within CDS markets have had a significant impact on the external debt market for both sets of companies. Prior to the pandemic, the average yields for their USD-denominated five-year fixed rate debt were close and moved within a steady range around 3 per cent, as shown in the graph. However, in early March, as investors worldwide "flew to safety" when faced with coronavirus risk, the credit market consensus suddenly dictated that the most creditworthy, bell-weather Indian corporations would have to pay up to 2.3 per cent more in annual interest than just a few weeks earlier in order to borrow in USD, a substantial increase relative to risk-free USD interest rates for similar maturities (at less than 1 per cent). Debt yields of these bell-weather companies decoupled from those of state-owned Indian firms. In particular, state-owned firms' cost of USD borrowing increased as suddenly, yet much more sharply, by roughly 3 per cent, such that they could borrow only on much worse terms than their bell-weather counterparts, despite their relatively more favorable credit risk assessment in CDS markets.

This seeming dislocation in the external credit markets continues as of today and could significantly harm India Inc., the Indian sovereign, and ultimately its economy, for at least two reasons. First, dislocated financial markets cannot allocate resources and share risks efficiently among investors, firms, governments and households, ultimately hurting their bottom lines. In the example above, the affected Indian companies will have to pass their higher borrowing costs to own stakeholders (customers, employees, suppliers, central and state governments) and potentially forego valuable investment opportunities exactly as the Indian economic engine is slowing down because of the pandemic and its aftermath.

Second, as asset prices are dislocated, market participants may make inefficient decisions, and their decisions may lead to self-fulfilling prophecies. In the example above, dislocated CDS and external debt markets may yield a distorted assessment of the absolute and relative default risk for Indian firms, which may lead to significant capital outflows (e.g., as domestic and foreign investors sell risk [Indian stocks and bonds] and buy safety [e.g., U.S. stocks and Treasuries]). Such actions, in turn, may lead to a greater cost of capital, and actually increase the likelihood of default for the most credit-needy Indian firms, in a vicious spiral that would be difficult to contain.

Ignoring market dislocations arguably contributed to the severity of the global recession that followed the 2008 financial crisis. India escaped the worst of that global shock. This time may be different, since the RBI has been sluggish in its response and the fiscal stimulus has been feeble. The RBI and the MoF should revisit this lesson and acknowledge that important segments of domestic and global financial markets - crucial sources of capital for Indian companies - are currently dislocated. Unprecedented efforts may be necessary to remedy these dislocations, prevent future ones, and mitigate their consequences, along the lines of the early actions of the US Federal Reserve and the European Central Bank in support of their local credit markets - actions that are already bearing fruit for their local economies. Only such dramatic actions would avert the catastrophe that these dislocations could otherwise wreak upon the already fragile Indian economy. We hope that Mint Road and North Block pay heed.