A leader for all Indians - Sunil Bharti Mittal

India’s challenges are numerous and it, therefore, requires not a few but many leaders to address the myriad problems. 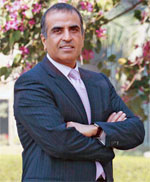 Sunil Bharti Mittal
India is more diverse and complex than many of us think it to be. Social divisiveness anchored on traditional loyalties of caste and community, extreme economic disparities, and widespread poverty make the task of nation building truly complex.

Given the multidimensional and multi-layered challenges before the nation, it’s imperative to find not a few but many leaders to address the specific problems as they emerge in their individual domains.

After four-and-a-half decades of rather sedate economic change after Independence, India has entered a rapid transformational phase post-1991.

Sustained high growth, continuous erosion in the ranks of the poor and phenomenal increase in the size of the middle class has clearly put India on the road to becoming a major global economic power.

In the years to come, economic growth is going to be the critical pivot around which changes in the social, political and cultural spaces are going to shape up.

To a true business leader, profit could be an essential condition for a viable business but certainly not the only condition for its continued existence. It’s more about the role his or her business plays in the economy and the way it impacts the lives of people.

It lies in their impact on society that follows from the connectivity revolution that the sector has ushered in the country. It has transformed people’s lives like never before. From the neighbourhood mason to the housemaid, from the big industrialist to the small-time entrepreneur, lives are changing for the better. 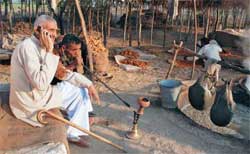 Indias population needs the right direction
While talking about risk-taking ability and a sense for things yet to come, my mind goes back to the early 1990s, when we first applied for a mobile licence. It appeared to many that a small company like ours, when pitted against the big From the neighbourhood mason to the housemaid, from the big industrialist to the small-time entrepreneur, lives are changing for the better.

While talking about risk-taking ability and a sense for things yet to come, my mind goes back to the early 1990s, when we first applied for a mobile licence.

It appeared to many that a small company like ours, when pitted against the big capital-intensive sector like telecom. Despite the initial difficulties and tough market conditions subsequently, we survived because of our perseverance and determination.

When we look back at the history of Indian business, we come across many such cases of entrepreneurs daring to take risks in unfavourable conditions and winning against all odds.

Of course, there can be a qualitative difference between what perseverance meant when we were living in a state-controlled socialist system and today’s liberalised marketplace.

In the pre-liberalisation days, perseverance meant working diligently towards overcoming the licensing system. On the contrary, in today’s laissez-faire system it could mean living through unfavourable market conditions and staying in the hunt to win in the marketplace.

Another example of perseverance that comes to mind instantly is the way Infosys mentor N. R. Narayana Murthy and his team built the software giant.

One can well imagine the difficulties they must have gone through in their early days. Only a steely resolve on their part shaped Infosys into what it is today. But more importantly, what I admire most about the company is the way it has led the country into the global software market.

Competition is the essence of today’s marketplace. A healthy regard for one’s competitors is an essential ingredient in a business leader’s character.

Playing by the rules helps in a healthy development of the market, which ultimately works in the interest of the consumers. A business leader’s propensity to respect competitors also helps him earn respect for himself. Global ambition needs to be an essential ingredient in a globalised marketplace.

Given the pace at which economic boundaries are falling, a lack of appetite for global growth could be suicidal. Barring a few sectors where we still have investment restrictions, we have virtually been competing with global companies in every business. Newly-liberalised markets
Some of the Indian business leaders have been quite active with mergers and acquisitions in the global market. We need more leaders to join this bandwagon.

A business leader needs to develop the highest regard for the customer, who constitutes the only reason as to why his or her business exists.

In newly-liberalised markets like India, regulatory environment in some of the sectors like telecom, aviation, insurance and retail would continue to evolve for some more time. During this phase, the government obviously looks to industry to guide it.

It’s the bounden duty of a true business leader to engage proactively with the policymakers and contribute in a constructive manner. But it’s also important to voice the concerns of the industry from time to time to help maintain a healthy growth of the market and protect the interest of the customer.

Wealth creation cannot be an end in itself. It needs to complement the larger objective of nation building. Given that a strong nation can only be built around healthy and educated people, it’s a duty of every wealth creator to make his or her contribution to the process.

There is an imperative need for every business leader to look beyond the narrow definition of market scope and shareholder wealth.

Acts of Corporate Social Responsibility need to form an integral part of a business leader’s agenda. The leader needs to develop a clear vision as to how his/her organisation could draft themselves into the task of nation building.

In a country of a billionplus people, with 22 per cent still struggling below the poverty line, there exists enough scope for action in the arena of social infrastructure—health and education in particular.

Voluntary interventions by business leaders into these areas would surely help the nation achieve inclusive growth. Many of today’s leaders have already initiated action on this front.

But we need more leaders to join this group. The task at hand is truly staggering.

I believe leadership is as much about excelling in a specialised domain as about dovetailing one’s critical expertise and vision into the overall objectives set by the society in general.

While the political leaders strive to set the agenda for development by building the critical consensus around the path, leaders from other arenas—business, science, art and culture— try to usher in changes in their own domains.

But all the leaders taken together need to ensure that the nation moves in a synchronised and all-inclusive manner.

Our billion-plus population has all the energy, it just needs the right direction.