Congress-led UPA will be remembered as most corrupt in our history: Chaitanya Kalbag

Business Today Editor Chaitanya Kalbag says the ADB thinks GDP will grow by 5.7 per cent in 2014/15, but it is not as if the tendencies in the Indian economy will go away magically after the elections. 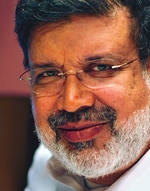 Chaitanya Kalbag
I remember visiting the Chilean poet Pablo Neruda's house in Isla Negra, west of Santiago, a few years ago. It was his favourite home and he is buried there with his third wife Matilde Urrutia. The house has a strong maritime feel, with Neruda's collections of ships in bottles, shells, and in one large room, figureheads - the buxom ladies with flowing tresses that used to adorn the prows of old wooden ships. One of them was particularly memorable - a figure that appeared to 'weep' as the ship presumably sailed into stormy seas. That figurehead reminded me of our benighted prime minister as he headed last fortnight into what can only charitably be dubbed "POTUS Interruptus" - his meeting with the President of the United States in Washington D.C. That meeting was torpedoed by presumptive heir Rahul Gandhi's shock gate-crashing of a press conference in Delhi where RaGa tried to stem the NaMo tide with a denunciation of the criminals-in-parliament ordinance. All very noble and undeniably the one act that pitchforked Lalu Prasad Yadav into prison a few days later, but redolent of the embarrassing mess that India's government has sunk into. Gandhi could have used his ex parte power to halt the ordinance before it was sent up to the President by the Cabinet; indeed, the ordinance itself was a desperate act to circumvent a stalled draft law that would allow convicted criminals to continue to wield power in our legislatures, neutralising a Supreme Court ruling in July. Instead, the young Gandhi chose to underline the impotence of constitutional posts in India. The day after Manmohan Singh limped back from the US, his Cabinet meekly decided that the ordinance, and the pending bill, should both be "torn up and thrown out".

Timing is everything, and with a number of state elections soon, leading to the general election next year, the cynicism and opportunism are manifest. The Congress-led government now in power will be remembered as the most corrupt in our history. Rahul Gandhi said it was time to fight corruption and to stop making "these small compromises". But there are larger ones at stake. Lalu was jettisoned just after the Finance Ministry issued a report that lists Bihar and Orissa among the country's most underdeveloped states, and thus eligible for the special status they have been clamouring for - a move that might encourage Nitish Kumar and Naveen Patnaik to throw their lot in with the Congress. The same week the Seventh Pay Commission was set up; although its recommendations will likely come into effect in 2016, it will have cheered up about eight million government employees. The Telangana die was cast on October 3. It's politics with a vengeance, the prime minister be damned - but that does not help the economy.

Gross Domestic Product (GDP) has grown at below five per cent for three quarters. Consumer price inflation stayed high at 9.52 per cent in August, with the central bank noting glumly that the trend was "entrenching inflation expectations at elevated levels and eroding consumer and business confidence". The RBI has cut its GDP growth forecast for 2013/14 to 5.5 per cent; the Prime Minister's Economic Advisory Council has cut it to 5.3 per cent; Finance Minister P. Chidambaram now says, "I think anything higher than five per cent and anything closer to 5.5 per cent should be considered a very satisfactory movement forward"; and the Asian Development Bank said it is revising its India GDP growth forecast down to 4.7 per cent from 6.0 per cent.

Meanwhile, the government is rowing furiously against the tide. Chidambaram has vowed to contain the current account deficit to $70 billion this fiscal year from $88 billion last year, but short-term debt is rising as a percentage of total foreign debt. The rupee's continuing weakness and the coming tapering of the US Federal Reserve's quantitative easing will hang over India.

Will a new, non-UPA government turn the tables? The ADB thinks GDP will grow by 5.7 per cent in 2014/15, but it is not as if the tendencies in the Indian economy will go away magically after the elections. We continue to be the sinkhole for the world's gold. We have become accustomed to very high food inflation - not helped by the Food Security Bill. And we have resigned ourselves to the rupee trading at around 62 to 65 to the US dollar. All this will make "complete nonsense" of our personal finances, of course, but to paraphrase Rahul Gandhi, it's time to wise up to the "political line" that India will be an economic juggernaut.