From being a socialist economy to a growth-oriented one, India’s tax regime mirrors the country’s changing economic policies

The journey of India’s tax regime since Independence, both on the direct and indirect tax fronts is fascinating, and to a large extent mirrors the change in the economic policies of the country.

The journey of India’s tax regime since Independence, both on the direct and indirect tax fronts is fascinating, and to a large extent mirrors the change in the economic policies of the country. From being a socialist economy to a growth-oriented one, the country has started looking at foreign direct investments (FDIs) as a springboard to leap forward. In the post-Independence era, we began with a British overhang and continued to levy very high rates of tax such that in the 1970s, the maximum marginal rate of tax including surcharge was an astonishing 97.75 per cent. Imagine, who would want to work hard to earn, and then be able to retain just 2.25 per cent of the income. No wonder, then, that the parallel economy that existed at the time was estimated to be much larger than the formal one and tax evasion was just as rampant. And if that was not enough, there was a levy of wealth tax on the market value of assets. For example, if the assets were listed shares, then the entire income earned from them would be spent in paying taxes. Add to that the payment of estate duty on assets bequeathed and we had a heady mix of taxes. On the corporate side, too, the country had multiple tax rates depending on whether a company was held closely or widely; whether it was industrial or otherwise; and whether the company was domestic or foreign. In that light, the old tax regime was a tax practitioner’s delight.

The decrease in tax rates has eventually led to higher collections, better compliance and also helped increase the tax base. To cite some recent numbers, direct tax collections have surged from Rs 33,564 crore in FY95 to Rs 14.10 lakh crore in FY21. Today, we have a maximum marginal tax rate of 42.74 per cent for individuals, and there is intense lobbying from various quarters to reduce that, too. The corporate tax rate, meanwhile, is between 15 and 35 per cent. The doing away of multiple tax incentives and introduction of much lower tax rates has been the highlight of the transformation of India’s indirect tax regime. Today, our corporate tax rates are indeed competitive globally. Moreover, we have a robust transfer pricing and advance pricing agreement regime that is consistent with the norms of the Organisation for Economic Co-operation and Development (OECD). Despite that, one issue that continues to trouble investors, businesses and authorities alike is the proliferation of litigation and the time that it takes to resolve them. For instance, most large tax disputes get litigated all the way to the Supreme Court and take, on average, more than a decade to resolve. That is one bottleneck that needs to be de-clogged on priority. When the goods and services tax (GST) was rolled out in 2017, it was hailed as the single largest tax reform introduced since Independence. Leaving aside the many challenges it faced during implementation, it has indeed been a landmark reform that subsumed the myriad Central, state and local taxes that were in force before it. Although we still do not have a uniform rate of GST and some items continue to remain outside its ambit, it has widely been accepted as a much needed reform of the indirect tax regime of the country. But the challenges of the dichotomous rulings of the Authority for Advance Rulings has thrown a spanner in the smooth functioning of the GST regime. With that said, without doubt, GST has ushered in a movement towards more organised trade while also helping plug the leakage in revenue that was prevalent in the previous taxation systems. It has also been instrumental in addressing the issue of mile-long queues of trucks that was a common sight at Octroi check-points. Incidentally, according to the data available with the government, indirect tax evasion has fallen drastically with the introduction of GST and there is considerable movement towards formal trade. 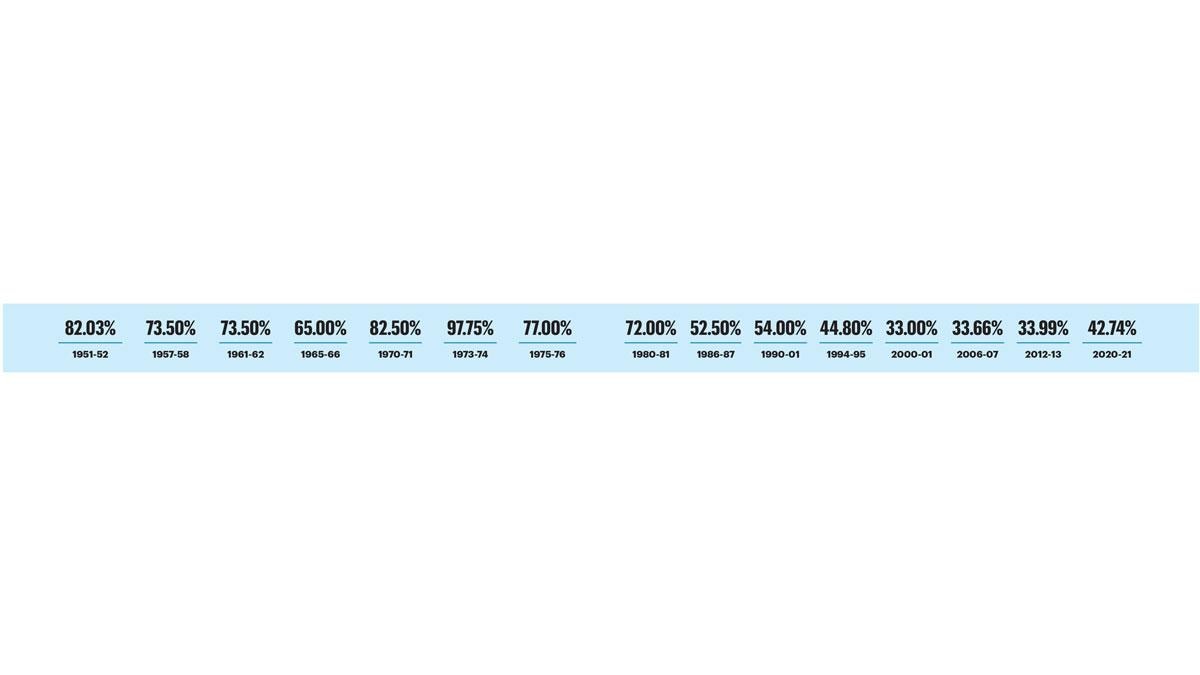 With the opening up of the Indian economy during the 1990s, India saw a spurt in the inflow of FDI. That gave rise to issues of treaty shopping and the use of Mauritius and other low-tax jurisdictions as a route for funnelling investments into India. Moreover, with an aggressive tax regime focussed on source-based taxation, the country has also witnessed tax authorities trying to subject most foreign payments with withholding tax obligations along with the Vodafone tax litigation and the resulting retrospective tax amendment. On the positive side, India has taken the lead in introducing a digital tax. While the Indian tax regime has been regarded by many foreign investors as being aggressive, without doubt India has contributed to the evolution of a judicious international tax policy. For instance, the OECD Pillar 1 recommendations have mirrored India’s thoughts on source-based taxation, while several European countries have followed India’s example to levy their own digital taxes. Also, over a period of time, we have largely been able to exorcise the ghost of retrospective taxation. However, litigation with regard to withholding taxes on outbound payments, particularly on payments of software and other services, continues to be a bane for industry players. As we see a fresh surge in foreign investments, there is a need to provide foreign investors with more certainty on tax implications and a better regime of advance rulings. Consistency in the interpretation of tax legislations and treaties is an absolute necessity for economic growth. As we move into the ‘Amrit Kaal’ of the country, we are seeing the tax office use technology and risk-based evaluation as a technique for tax scrutiny. We have also seen the taxpayer base increase from 31.1 million in FY12 to 58.9 million in FY21 despite an increase in the tax-free threshold. Further, the introduction of e-assessments and transparency in auditing, too, augur well for the country’s tax ecosystem. But what we need to do going forward is to rein in tax litigation by further simplifying the process of tax calculation and filing. We also need to provide quicker and fairer advance rulings and ensure that there is no multiplicity in the interpretation of tax laws. Lastly, the government should look at processes that can close out the pending tax-related litigation while ensuring that such cases are resolved in a much shorter timeframe than at present.

Also Read: Do you need to pay advance tax before September 15? Here's all you need to know

Also Read: Income tax refunds: How to check your refund status if you haven’t received it yet