The issuing of manufacturing licences should be strictly regulated and the frequency of spot audits stepped up along with severe penalties for non-compliance, writes Biocon CMD Kiran Mazumdar-Shaw. 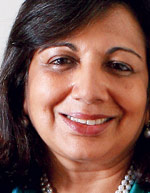 Kiran Mazumdar-Shaw
With Indian-made generics accounting for a US market share of over 25 per cent, it is not surprising that it is gaining significant mindshare of the American drug regulator, the Food and Drug Administration (FDA).

The spate of quality issues with leading Indian pharmaceutical companies in the past couple of years, however, should not be viewed in isolation.

Big Pharma in the West, too, has been facing increasing flak from the FDA and other regulators over good manufacturing practice violations. High profile names such as J&J, Genzyme (Sanofi), GSK, Sandoz, Watson, Teva and many others have encountered their share of quality problems and have been served with 'warning letters' from the FDA.

The real issue is of quality medication, and how we can ensure that every tablet or dose whether for home or overseas markets is of the highest quality. This is important since India has already taken its place at the high table of the global generics market with around $15 billion in exports expected to increase to $20 billion by 2020.

It is widely accepted that instances of good manufacturing practices (GMP) violations stem from negligence. This makes it vital for Indian companies to put in place checks and balances to prevent such slip-ups. While it is true that we have a crisis at hand, I do not believe that there will be any sustained damage as Indian companies can swiftly take corrective action and regain their reputation as a quality producer of affordable generics to global markets. This could even be an opportunity to create a quality benchmark for others to emulate.

Understanding Non-compliance
Non-compliance is not new to the global pharmaceuticals industry. It is due in part to the stringent and diverse regulations across markets that require compliance. The FDA is a highly vigilant regulator that relentlessly pursues non-compliance action against a large number of companies in the US as well as all over the world.

Given our fast growing share of the US generics market, the FDA has naturally been conducting inspections in India more assiduously and frequently. This has resulted in several notices being issued to Indian companies almost concurrently. Compounding this is the hefty fine levied on Ranbaxy for a past breach in compliance. The unfortunate impression it has created is that non-compliance is pandemic in the Indian drug industry

What Ails Indian Pharma
There are several factors that have led to this crisis in the Indian pharmaceuticals industry. One is that there are too many regulators and policy makers. Regulation and policy is governed by the ministries of health as well as chemicals and fertilisers.

For biopharmaceutical companies, in addition to these, there is the Department of Biotechnology and the Ministry of Environment. Manufacturers, thus, have to comply with overlapping, and at times contradictory directives, from three different departments. At the policy-making level, a single ministry for the pharmaceuticals sector is one way forward.

MUST READ: Long way to go for Ranbaxy to regain lost trust

The start can be made with biologicals and biosimilars by expediting the long-awaited Biotechnology Regulatory Authority of India under the Department of Biotechnology. Biosimilars, or biogenerics, particularly need to be regulated by a separate group within the regulatory system.

Take, for instance, the two to four-year timeline for pharmaceutical generics at a cost of $1 million to $2 million per Abbreviated New Drug Application (ANDA). In the case of biogenerics, which present the next big growth opportunity, regulatory barriers are steep and time to market is five to eight years at a steep price of $50 million to $75 million per ANDA-equivalent.

Another concern is the dual quality of drugs. The International Conference on Harmonisation of Technical Requirements for Registration of Pharmaceuticals for Human Use (ICH) guidelines mandate a much higher quality level for generics than the innovator products, which then adds to the cost.

Emerging markets, on the other hand, require quality specifications to match those of the innovator, which is what causes the criticism. In any case, so long as the drug meets the quality norm of the market in which it is sold, that should not be a serious concern.

Finally, there is a huge gap between small and large pharmaceutical companies based on quality testing and automation in manufacturing infrastructure. This by itself creates quality issues and it is vital to ensure that we bring pharmaceutical manufacturers, irrespective of size, under the ambit of common quality standards.

Watchdog that Barks - and Bites
While the industry needs to heed the writing on the wall, there is much that government can do to redress the situation. To start with, we need uncompromising regulation along the lines of the US FDA. Existing regulation is completely derelict both at the central and state levels. The issuing of manufacturing licenses should be strictly regulated and the frequency of spot audits stepped up along with severe penalties for non-compliance.

Mere training workshops, which are the norm, will not suffice to upgrade the competence levels of regulators. Rigorous training programs for regulators of at least one year should be instituted and made compulsory. It is important that approval and regulation be conducted by people who thoroughly understand compliance requirements including quality, efficacy, immunogenicity and GMP - not just the quality standards handbook. Clearly, the government needs to look beyond the rank and file of its technocracy to induct experts with wider exposure to manufacturing and compliance for key regulatory and approvals positions.

Bottom Line
While there is much that the industry can contribute in terms of self-regulation, the government needs to sit up and notice that this poorly but over-regulated sector needs much more support than information technology, which enjoys virtually no regulation. Instead, it has saddled the pharmaceutical sector with an unfair tax structure, control prices and denied much-needed tax incentives for R&D, overseas development and international patents. The sector needs investment to upgrade infrastructure and expertise - and the government must act now to provide the enabling framework and policies.

For all the challenges however, I believe this crisis is a huge opportunity to develop a new regulatory path that others will follow. But to do that we must first earn the credibility of the outside world. The first step forward would be to evolve -- one with a global standards quality framework and implemented it with zero-tolerance regulation.

The writer is CMD, Biocon