A little-known Chinese pharma company buys an equally less known Indian firm for an astronomical valuation, and causes a stir in the industry. Why exactly did the deal happen?
By E Kumar Sharma | Print Edition: August 28, 2016 The jury is still out on whether Shanghai Fosun Pharmaceutical Group's recent decision to shell out $1.26 billion for a controlling stake in Hyderabad-based Gland Pharma was too aggressive. Some say the bid for a contract manufacturing firm valued at $1.35 bllion, besides having a US presence with Rs 300 crore net profit and over Rs 1,000 crore in sales, was a strategic acquisition that demanded Fosun to pay a premium. Others, including Indian pharma majors who lost out to the Chinese group's bid, however, are of the view that despite Gland's track record and positioning, the deal should have been in the range of $800 million to $1 billion.

The fact that the $8-billion Fosun Group was keen on the US market makes the deal special, given that 62 per cent of Gland Pharma's revenues of $169 million in 2015 came from the US, compared to 16 per cent from India and the rest from other geographies. Besides, Gland expects more business from the US as its prototype for Enoxaparin - a leading anticoagulant that commands a $1.4-billion market shared by half a dozen pharma players - is waiting US regulatory nod.

What's more, Gland's enterprise value (equity plus debt, minus the cash) was pegged at $1.35 billion based on the company's earnings before interest, taxes, depreciation and amortisation (EBITDA) for 2015/16, only a shade below the current valuation of $1.46 billion, which is based on the deal. And, to further drive home the point, a section of industry experts feels that the $1.05 billion, or $96.87 per equity, Fosun is expected to pay upfront is also in line with the price-to-earnings (PE) ratio of 35-40 that leading Indian pharma companies are trading at on the bourses. Gland is privately held and is not a listed company.

Once the deal is completed, the Chinese group will hold 86.08 per cent equity interest in Gland Pharma - a direct acquisition of 79.99 per cent equity interest and 6.08 per cent through the subscription of convertible preference shares issued by Gland. The deal also allows purchase of the 10 per cent equity retained by the promoter shareholder at a later date. "The founder shareholders shall have the right to exercise a put option within one year from the expiration of the period of one year after the share purchase agreement (SPA) closing date to require the buyer to further acquire the remaining shares of Gland held by the founder shareholders for a consideration up to $180 million," says the deal agreement. However, for now, Ravi Penmetsa, the current Vice-Chairman and Managing Director, will be appointed as the CEO for a three-year period. Penmetsa, however, refused to comment on the development.

What's in a Deal

It is hard not to compare the Fosun-Gland agreement with other mega deals in the Indian pharma space - the 2008 takeover of Ranbaxy by Daiichi Sankyo, and Ajay Piramal selling his formulations business to Abbott in 2010. At the same time, there is a huge difference. Piramal and Ranbaxy were bought for their domestic branded formulations businesses. Gland Pharma, on the other hand, is a contract manufacturer of injectables, which are mostly exported to regulated markets. 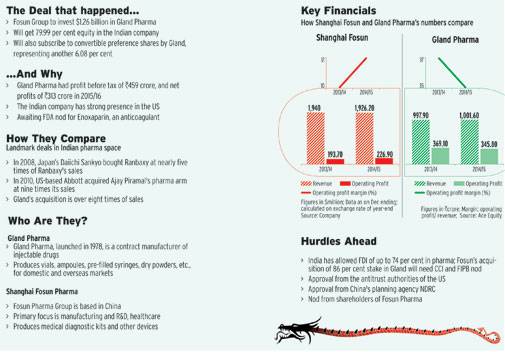 Analysts say the valuations of the Gland deal cannot be compared with the Piramal-Abbott and Ranbaxy-Daiichi transactions because it is more of a manufacturing capacity acquisition or an asset purchase. Yet, the numbers make for an interesting case. Piramal's formulations business was acquired by Abbott for nine times its sales, while Ranbaxy was acquired at five times its sales. Gland, going by the March 2015 sales figures of Rs 1,000 crore, roughly translate into eight times sales - something that the Indian pharma companies, including Dr Reddy's, Torrent and Baxter, were not willing to pay.

Analysts feel the move by Fosun was triggered by the fact that most Chinese companies, like some of their Indian counterparts, are facing the US FDA heat. Between 2010 and 2015, the number of inspections in China rose from 48 to 132. In comparison, India saw an increase from 72 to 203. But in India, there are many good facilities without FDA issues. Gland Pharma was one such company.

Global generic injectables market is estimated at $17-billion. And given the fact that the largest players, Israel-based Teva Pharmaceutical and US-based Hospira, are facing issues with the FDA, there is an acute shortage of injectables in the US market. Getting a slice of this would not only mean immediate pricing power, but also a bigger market share. Also, estimates show that if EBITDA margins were 20-25 per cent for generics tablets and capsules, for injectables it is 50-60 per cent EBIDTA in the US market.

The Fosun Group, which has a business strategy of "organic growth with external expansion and integrated business operation", sees itself as "dedicated to becoming a first class enterprise in major global healthcare markets". Nevertheless, analysts still see its inability in terms of building such capacities in China. Perhaps the need to gain momentum and expand their operations in the US drove the company to seal the deal with Gland Pharma. The Group, set up in 1994, is a behemoth of sorts - a leading healthcare group in China primarily engaged in pharmaceutical manufacturing, research and development, healthcare services, production and sale of medical diagnosis kits and medical devices, and pharmaceutical distribution and retail. The company's other arm involved in the deal is Fosun International, whose businesses include integrated finance (wealth) and industrial operations. The integrated finance (wealth) business includes four major segments: insurance, investment, wealth management and Internet finance, while the industrial operations division includes health, happiness, steel, property development, and sales and resources.

Gland Pharma was incorporated in 1978, but took off in 1996 following an investment of Rs 1.5 crore by private equity investor Ventureast. The company had just touched sales of Rs 2.5 crore when Sarath Naru, the Managing Partner of Ventureast, was impressed by the approach of its founders. "One, Gland's manufacturing capability in small volume parenterals (primary packaging material for biotech drugs or liquid medicine) was impressive. Two, the founders were extremely hung up on quality and execution. It was the first company to get an SPV facility approved by the US FDA in India," says Naru, adding: "The other thing that convinced us was the involvement of Vetter, a German SPVmanufacturer, which came in as a strategic investor and provided technology and training."

But, in 2003/04, Ventureast exited Gland Pharma. "We got a good exit - a high single-digit multiple. We exited because we play a portfolio game and we cannot stay all the way till double-digit multiple in every case," he adds. Gland was later funded by two other PE investors.

The Fosun-Gland deal, coming close on the Indian government's decision to allow foreign direct investments of up to 74 per cent in pharmaceutical manufacturing, has enthused a section of industry insiders, while others still remain sceptics. Some pharma industry veterans feel it may not be easy to get investment easily. "This will be a test case for the government of India in special verticals, such as injectables and vaccines, and much would depend on who within the Indian government today would do the advocacy for a Chinese company in the current political atmosphere," said an expert on condition of anonymity.

For the moment, however, there is a long list of positives from the deal, including the mouth-watering valuation of an Indian drug manufacturing firm. There's also a lesson from Gland's success - the will to excel and planned execution can take Indian companies to new heights. Says an analyst: "Gland is the first injectable drug manufacturer that has been approved by the FDA and has obtained GMP certification for markets around the world. Gland's main business model is joint development of products and introduction of licences to provide all global major pharmaceutical companies with the manufacturing services in relation to injectable generic drugs. As one of the few companies that engage in the manufacture of injectable drugs, Gland takes a leading position among the comparable companies in the Indian market." That is some food for thought for other Indian manufacturers.

For the moment, however, the tax department may be watching - for if all goes well with deal, there may be a good sum - around Rs 800 crore, or thereabouts - in tax collections, too. Now it is up to the regulators to clear the deal - the Competi-tion Commission of India (CCI) and Foreign Investment Promotion Board (FIPB).

"We will be profitable in the next three months"