"The initial years of our business were tough. Only the loyalty of our early customers helped us" T.S. KALYANARAMAN, Founder and Chairman, Kalyan Jewellers (Photo: Nilotpal Baruah)

On October 20, American private equity (PE) firm Warburg Pincus announced that it had picked up a minority stake in Thrissur, Kerala-based jewellery retailing firm Kalyan Jewellers. Such an investment would have been routine in an era when PE funds have been chasing investment opportunities in India, except for two reasons.

One, Kalyan Jewellers was no e-commerce play, the favourite destination for PE investment in the country, but a chain of physical retail stores. Second, the Rs 1,200-crore invested to pick up a 10 to 12 per cent stake (neither would disclose exactly how much) valued the company around $2 billion (Rs 13,000 crore), raising eyebrows. How did a company, with a largely South India footprint till recently, manage to get such a high valuation, propelling its owner into the billionaire club? It has a lot to do with Indians' love for gold and some savvy moves by the company's founders.

Interestingly, Kalyan Jewellers gets about the same revenue and margins as Tanishq, the jewellery division of Titan - only it has a third the number of stores that the Tata company has.

Narayan Gowda, 47, works with the Karnataka Public Works Department and, like millions of Indians, is a big investor in the yellow metal. Every year, he accumulates some gold jewellery. "I have two daughters," he explains. On a recent Friday, he patiently waited outside a Kalyan Jewellers gold jewellery showroom being inaugurated in the upscale Jayanagar area of Bangalore. The ribbon-cutting was being done by Kannada superstar Shivaraj Kumar to draw crowds but Gowda was there for another reason. He had heard that this jewellery chain fixed the entire price of each item transparently. "I did not have to endlessly haggle at billing time on making and wastage charges which made my purchase hassle free," he says.

Gowda ended up buying a pair of bangles but a surprise was in store. A week later he received a call from the billionaire founder chairman of the company, TS Kalyanaraman, enquiring about his entire buying experience. Pleasantly taken aback at receiving such personal attention from the top honcho of the company, Gowda intends to be a repeat customer.

Kalyanaraman is a short, reticent man, who more often than not likes to speak in monosyllables, sports Armani suits and wears a diamond ring and a chunky gold chain. The call to Gowda was his way of ensuring that every month he talks to at least 10 customers, selected on a random basis, to get first-hand feedback.

This degree of attention to detail is one of the reasons why Kalyan Jewellers, a relatively recent entrant to the business, has tasted big success.

It was only in the early 1990s that the jewellery trade slowly started becoming more organised. A clutch of large pan-India players such as Rajesh Exports (1990), Tanishq (1994) and Gitanjali Gems (1986) emerged on the horizon.

This was also the time that Kalyanaraman, a traditional textile seller in Thrissur who primarily sold wedding finery and had a reputation of being a straight dealer, was being goaded by his customers to also offer jewellery. It would have allowed Kalyanaraman's clients to buy both jewellery and clothes, the two big-ticket consumption items for any Indian family, under a single roof.

By 1993, Kalyanaraman had a flourishing textile trade, a business launched by his father in 1950s. He then decided to enter the jewellery business. He began sourcing jewellery and selling it at his shop with an initial investment of Rs 75 lakh. One of his innovations was putting a price tag on each product clearly indicating all the details such as making and wastage charges along with the final price. In the Indian jewellery business, where customers mostly pay on the weight of the product, the seller usually recovers his margin by tacking on other charges such as making and wastage (while creating a piece of jewellery some amount of gold is wasted). In most cases it also means compromising on the purity of gold.

By turning conventional industry wisdom on its head, Kalyanaraman attracted a loyal set of buyers who were willing to pay for design, proven purity, ambience and other incidental charges. Kalyanaraman had more than his fair share of detractors in the industry. They threatened and unsuccessfully tried to run him out of business. "Those were tough times. Only the loyalty of our early customers helped us," he says.

Kerala, the tiny southern state of India, outdoes most other parts of the country in its love for jewellery. It is probably the reason why the maximum number of jewellery store chains such as Malabar Gold, Chemmanur, Josco and Alukkas, amongst others, have emerged in the state.

Amidst such stiff competition, it was not easy for Kalyan to make a mark. However, Kalyanaraman set up his own manufacturing facilities once business started expanding to ensure quality control, offer unique designs and own the complete value chain. He continues to partly source some of his jewellery. 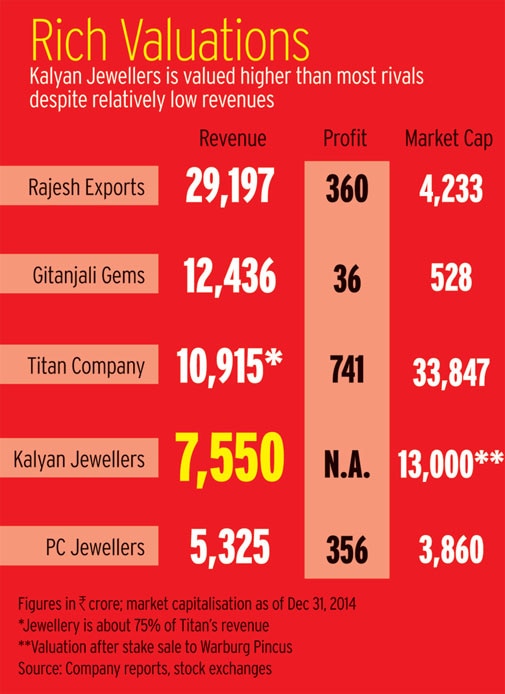 Kalyan Jewellers is valued higher than most rivals despite relatively low revenues.
A careful and calibrated expansion meant that irrespective of the price fluctuation of the raw material (gold, diamond or silver), the company steadily grew while increasing profits. Rajesh Kalyanaraman, 39, Executive Director of the company and elder son of the Chairman, who looks after purchase and finance, says they spend about six months studying a market before putting up a showroom. "Tanishq has almost three times the number of showrooms as us to have a similar turnover. We are able to have greater footfalls and higher conversion rate of buyers because of our attention to detail," he says. "In our two decade-plus history we have not closed a single showroom we have ever opened."

His younger brother Ramesh, 36, who also assists his father as Executive Director in charge of Marketing and HR, says employee loyalty has been key to the company's growth. "We treat employees like our extended family. We pay above-market wages. Attrition is mostly unheard of in the company."

It also helps that the company spends about two per cent of its revenue on marketing. It has roped in Amitabh Bachchan, Aishwarya Rai, Shivaraj Kumar, Nagarjuna Akkineni, Prabhu Ganesan and Manju Warrier as brand ambassadors.

Marketing consultant Harish Bijoor points out that most of its brand ambassadors are either icons in their regional movie industries or related to them. Thus, Shivaraj Kumar, a superstar in his own right is also the son of Kannada movie legend Dr Rajkumar. Similarly, Prabhu is the son of Tamil thespian Shivaji Ganesan. "They have carefully selected and identified the brand with timeless icons who appeal across generations." "Warburg Pincus was not the only one we spoke to nor did it offer to value us the most... But we struck a good rapport (with them)"

Kalyanaraman admits that the Indian jewellery market differs heavily from state to state and region to region. "In eastern parts, intricate Bengali jewellery is the norm, colour stone-studded jewellery is popular in parts of Andhra, and traditional jewellery in Kerala and Tamil Nadu. Each market is unique." Kalyan Jewellers' strategy of a being a national player that tracks local preferences in jewellery products seems to have paid off.

A large part of jewellery demand comes from Tier-II and Tier-III cities where it is also regarded as a safe-haven asset. To penetrate these markets, Kalyan Jewellers has set up 'My Kalyan' teams. Each team with four to six members works in surrounding 'catchment areas' to push the brand by taking select pieces and displaying at local events, providing information, service and support. They also act as feeders to the main Kalyan showrooms, diverting traffic to them. There are more than 100 such 'My Kalyan' teams - they are now trying to push diamond jewellery along with gold.

When Warburg announced its investment it created a stir. Not surprising, since it has made some big-ticket successful investments in India - their investment portfolio includes Kotak Mahindra Bank, Bharti Airtel, Max India, Havells and Amtek Auto.

So, why did Kalyan solicit help from Warburg and why did the US venture firm value the Indian company so highly? Ramesh Kalyanaraman says the deal with Warburg was sealed over several months. "I can definitely say that they were not the only ones we spoke to nor the ones who offered to value us the most. Others offered higher money than they did. But we struck a good rapport right from our first meeting," he says. "Also their track record in India, handholding companies like Bharti and Kotak reassured us a lot."

While the Kalyanaraman family is loathe to disclose exactly how much stake they divested, the company had Rs 2,000 crore net debt (mainly borrowings for working capital as jewellery is a capital-intensive business). After infusion of external funds, Kalyanaraman says its equity is at Rs 1,900 crore. So the gearing, or its debt-to-equity ratio, is healthy, at just a little over one. Kalyan Jewellers has scaled up operations over the last few years.
Vishal Mahadevia, Managing Director of Warburg Pincus India, says that what attracted his firm to Kalyan was the company's rapid growth, its profitability (company says it is on par with Tanishq) and the value system of the promoter family. "Investing money is a given. However, Kalyan worked with us because of our global expertise in handholding companies when they are experiencing fast growth and helping them make the right decisions," he says. Warburg in the past has helped portfolio companies access cheap finance, source talent, institutionalise best practices and expand globally, points out Mahadevia.

Not everyone agrees with the valuation. "Valuing them at such high levels is a little optimistic," says the MD of a large competitor of Kalyan who did not want to be identified. The MD agrees that there is plenty of room for growth as the jewellery market becomes more organised and points out how Chow Tai Fook, the Chinese jewellery company listed on the Hong Kong market, has a valuation of $13.5 billion. But he says competition is fierce and sounds a note of caution. "They have done well by mainly focusing on South and West India. Once they go fully national and even international, their margins will take a hit. Let's see how they will tackle those challenges."

For now Kalyanaraman and his family are sitting pretty and are not unduly worried. A new 13-seater customised Embraer Legacy 650 aircraft will join Kalyan's existing fleet of an Embraer Phenom and a Bell 427 chopper, as the company continues to expand in India and overseas. In 2014/15, Kalyan Jewellers expects to close with revenues of Rs 10,000 crore and add 28 showrooms, including 12 overseas in countries like the UAE, Kuwait, Singapore and Malyasia, to its existing 61 stores. In the next three years the company is looking to beef up revenue to Rs 25,000 crore. "Whether national or international, we will act local to meet customer expectations," says Kalyanaraman.

Five families show how business can thrive by working together