Luxury carmakers are increasing their use of indigenous components and expertise - but within limits. Making more in India: Audi cars being assembled at its Aurangabad plant

Luxury car manufacturer BMW recently announced it had achieved 50 per cent localisation across all its eight car models sold in India. Rival Mercedes-Benz declared soon after that two of its five models in India - its newly launched C220 CDI and the largest selling E-Class - have a localisation level of 60 per cent. There was a time when much of the appeal of luxury cars derived from the fact that everything about them was imported. No longer: today, both BMW and Mercedes-Benz proudly flaunt their indigenous content.

"Many components of our cars such as the engine, the axle, the dashboard, the gearbox, the wiring harness, etc., are assembled by local component makers in India," says Eberhard Kern, Managing Director and CEO of Mercedes-Benz India. "We do the bodywork, the welding and painting right here." Capacity at its plant in Pune has doubled over the past two years to 20,000 vehicles a year, with a total investment of Rs 1,000 crore. The company's main component suppliers are Motherson Sumi Systems and Force Motors.

"Our localisation level was 20 per cent only a year ago, but now it is 50 per cent," says Philipp von Sahr, President, BMW India. "Unlike our rivals, our localisation figure (of 50 per cent) is across models and not just one or two models." BMW, which started India operations in 2007, has so far invested Rs 490 crore - Rs 100 crore in 2014/15 - increasing its Chennai plant capacity from 11,000 to 14,000 units annually. It gets its engines and transmission from Force Motors, axles from ZF Hero, chassis, door panels and wiring harness from Draexlmaier India, exhaust systems from Tenneco Automotive India, heating, ventilating, air-conditioning and cooling modules from Valeo India and Mahle Behr, and seats from Lear India.

The two other luxury carmakers, Audi and Jaguar Land Rover, were less forthcoming. Audi India head Joe King said 95 per cent of its sales volume was locally built at its manufacturing facility in Aurangabad, but did not elaborate. The Tata Motors-owned Jaguar Land Rover India manufactures four models at its Pune plant, having trebled production since it began in 2011. But the company did not share details of localisation. Volvo Cars is also trying to get a toehold in India but has yet to start assembling or manufacturing here.

Why Make in India

Even in the narrow, exclusive segment that buys luxury cars, price matters as much as comfort and brand value. It was this that prompted the global brands to set up assembling or manufacturing units in India - and thereby avoid the 125 per cent duty imported cars attract. Not that the entire benefit is passed on to the customer. When Jaguar Land Rover's Jaguar XJ 3.0 Diesel Premium Luxury model was imported, for example, it used to cost Rs 1.25 crore. After local manufacturing began in May 2014, the price fell to Rs 92.10 lakh, a reduction of just 35 per cent.

Our products have a certain quality and customer satisfaction level, so we can ask for premium price

As a first step towards localisation, foreign manufacturers started importing cars in completely knocked down (CKD) units. Initially, the manufacturers started importing CKD units with pre-assembled engine, gearbox or transmission mechanism. In some cases, CKD units would have a chassis or body assembly on which the engine or gearbox or transmission mechanism would already be installed at the time of import.

To promote local manufacturing, the UPA government in 2011 changed the definition of CKD units, and excluded such units as mentioned earlier from this definition. It also increased the customs duty on units with pre-assembled engine or gearbox or transmission from 10 per cent to 30 per cent. "This was the first trigger for luxury carmakers to change their strategy in India and start localisation of their cars," says Sugato Sen, Deputy Director General, Society of Indian Automobile Manufacturers (SIAM).

The duty on auto components is far lower at 7.5 to 10 per cent, but getting components made locally helps keep prices in check as well as improve margins. "BMW used to raise prices three or four times a year before, which, with increased localisation, has come down to twice a year," says von Sahr. But he admits prices have not been lowered as much as they could be. "We have to look at our price positioning, our competitors' price," he adds. "Our products have a certain quality and customer satisfaction level, so we can ask for premium price." Local manufacturing speeds up delivery, too. "It gives us a lot of flexibility," says von Sahr. "We no longer need to wait for parts from the US, China or our headquarters in Bavaria, southern Germany." It also lowers labour costs. "India's labour wage rate is around $4.50 a day, while in China it is $6 and in Thailand $9," says Vinay Khattar, Associate Director and Head of Research, Edelweiss Financial Services. Compared to Europe or the US, the saving is even higher. "A locally manufactured engine system would be 23 per cent cheaper on a landed cost basis in India than a comparable engine system made in Europe," he adds. "We have excellent engineering skills at competitive cost," says Vinnie Mehta, Director General, Automotive Component Manufacturers Association (ACMA) of India. "In Brazil and South Africa, which are also emerging markets like ours, the cost of manufacturing is 20-30 per cent more than in India." 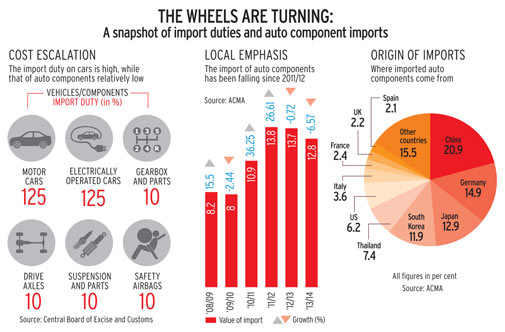 The relatively small size of the market so far, however, also limits the extent of localisation. "Many of the parts we use have to come from international hubs. As component makers, we do not produce them here because of the low volumes," says Kern of Mercedes-Benz. The assembling no doubt is all done in India.

Industry experts say there are three stages of localisation. In the first stage, the automaker imports all components, but assembles in the new market, in this case, India. In the second, it persuades its leading suppliers to start units in India, but the latter still import from their parents overseas. In the third stage, the leading suppliers also start sourcing from local component makers. The Indian market is past the first stage, but is hovering between the second and third. "Global automakers have now started measuring the level of localisation in these terms," says Rajeev Singh, Head (automotive sector), KPMG India.

Many components of our cars such as the engine, the axle, etc., are assembled by local component makers in India

Thus Force Motors, which supplies components to both Mercedes and BMW, assembles most of them, hardly manufacturing anything. "We assemble and test the engines for all Mercedes-Benz cars and SUVs," says Prasan Firodia, Managing Director, Force Motors. "We also assemble the rear and front axles, assemble and test the gearboxes." But there are also component makers like JBM Auto, supplying to both domestic and foreign auto companies, which manufacture as well as import. "We have 20 alliances. Some are joint ventures and some are technical tie-ups. We import some components from our foreign partners, while some are locally manufactured," says Nishant Arya, Executive Director, JBM Auto.

Ultimately, localisation can only increase in the future as the luxury car market expands. Some experts even feel, given India's numerous advantages, the country could emerge as an export hub for such vehicles. "The Indian auto component industry is large and well-accepted. We exported $10 billion worth of components in 2013/14, of which 60 per cent went to Europe and the US," says Mehta of ACMA.

Family businesses seek mentors from outside