What do these five executives have in common? They are all successful novelists as well. Tripathi has written two novels - The Immortals of Meluha and The Secret of the Nagas - which, according to his publisher Westland, have sold 350,000 copies so far. Sanghi has published two, The Rozabal Line and Chanakya's Chant, again brought out by Westland, with 80,000 copies in print. Chanakya's Chant also won the Vodafone Crossword Popular Choice literary award for 2010.

Subramanian's corpus comprises three novels - If God Was a Banker, Devil in Pinstripes and The Incredible Banker - and one non-fiction work, I Bought the Monk's Ferrari, which have sold a total of 450,000 copies. The other two, Rathi with Resident Dormitus and Sampat with The Tenth Unknown, are debutants, whose books were released in the last two months.

Barring the single non-fiction offering, the contents of these books can be broadly divided into two: while Tripathi, Sanghi and Sampat concern themselves with the past, Subramanian and Rathi focus on the contemporary. Indeed, Tripathi's locale is a mythological past, with his two books - part of a proposed trilogy - chronicling the rise of Shiva, later to be revered as a god, as he helps the residents of Meluha battle their foes. 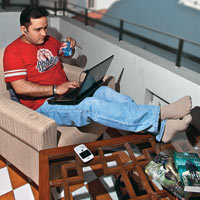 Amish Tripathi
Sanghi's genre is the historical thriller - the award winning Chanakya's Chant narrates two parallel political tales, one set in Chanakya's time 2,300 years ago and the other in post Independence. Sampat's book, too, has a wide historical sweep, but concentrates primarily on the World War II years.

In contrast, Subramanian sticks to the world he knows first hand - all three novels are set in the banking sector, where he spent 16 years. "I want to be the John Grisham of banking," he says. Rathi's debut novel, too, deals with a variety of experiences a young man faces in present day India just after he steps out of college. Spurred by his repeat success with The Secret of the Nagas, Tripathi quit his corporate job in July this year to become a full-time writer. But the other four continue in their high-pressure jobs, which often involve 12 to 14 hour workdays.When do they get to write? "I wrote a large part of both my books in the backseat of my car while commuting to and from office," says Tripathi. Sanghi, Subramanian and Sampat say they work at night into the early morning hours, after the family has fallen asleep. "I wrote my novel in coffee shops after work," says the Singapore-based Rathi. "I'm okay with the chaos and noise around me." 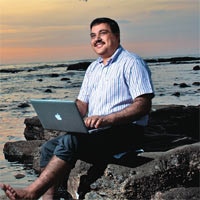 Ravi Subramanian
Their novelistic concerns may vary, but their corporate background unites them when it comes to marketing their books. They have been proactive at it, a far cry from the traditional, reclusive author who would leave the task entirely to publishers and agents. Film trailers are de rigueur, but ever heard of book trailers? Tripathi began the trend by getting an ad filmmaker friend to make a 30-second trailer for The Immortals of Meluha, which he uploaded on YouTube. Since then book trailers have become almost a norm; Subramanian has four to promote his The Incredible Banker.

Apart from making the usual YouTube trailer for Chanakya's Chant, Sanghi also made an MP3 music track of a chant called the Shakti Mantra, which is central to the book and can be downloaded off the Net. "My approach is business-oriented," he says. "I benchmark myself on the basis of the number of copies I sell."

In yet another initiative, Tripathi had the first chapter of The Immortals of Meluha printed separately as a booklet and distributed free at leading bookshops. He is also ready with a 50-second trailer on The Secret of the Nagas, to be aired in Mumbai and Delhi multiplexes in October. "Many of the new writers are extremely tech-savvy and capable of publicising their work effectively, be it through social networking sites, blogging or YouTube clips," says Nandita Jaishankar, Editor at Niyogi Books.

Contrary to the refrain that no one reads books any more, book sales are growing at around 15 per cent, year-onyear, and the market is currently estimated at Rs 1,000 crore. Adult fiction in English is a Rs 28.7-crore market, with about 1.14 million copies having been sold between January and July 2011, according to book sales tracker, Nielsen BookScan India. (Adult fiction across all Indian languages is a Rs 200-crore market.)