With subsidiaries bleeding and funding getting tougher to come by, BYJU,S faces a critical point in its journey

BYJU’S is always in the news, for good or bad reasons, which in a way is helping them to be relevant in media

The biggest cost in the edtech business is marketing. BYJU’S is always in the news, for good or bad reasons, which in a way is helping them to be relevant in media. They shouldn’t be spending too much on marketing,” an edtech founder tells Business Today on condition of anonymity. The acid-dripping joke is a pointer to the heavy visibility of BYJU’S in the media—both in paid advertisements and organically, which has been mostly bad news in recent times. In the past three months, BYJU’S is believed to have laid off 2,000-2,500 employees across group companies; however, the official figure is less than 500. The company also appears to be struggling to meet funding requirements.

To be fair, it isn’t BYJU’S alone that is in the news for the wrong reasons. Start-ups across the edtech spectrum are moderating marketing spends and salaries as funding becomes harder to come by and investors start looking at the path to profitability more closely. Lay-offs are the order of the day—nearly 6,000 pink slips have been handed out by the likes of BYJU’S, Vedantu, Unacademy and Lido Learning, among others, since January 2022. Salary cuts and other austerity measures have also started to rain in at these edtech companies. Krishna Kumar, Founder & CEO of edtech Simplilearn, says the sector will grow stronger as demand for digital will only increase, but a lot of moderation will need to happen. For example, hiring people at 100 per cent hike in salaries will get corrected now, he says. “Advertising has gone completely crazy, most IPL advertisers were tech companies. This will also moderate significantly now,” he says.

Even as the entire edtech sector struggles, BYJU’S being the 800-pound gorilla is simply more visible than the others. But here’s the thing. The core K12 business of BYJU’S—sale of education tablets and SD cards, tuition fee, sale of reference books—is profitable. Where it bleeds is in its subsidiaries. So, no surprise that the majority of pink slips handed out were in its subsidiaries, which begs a question about its acquisition overdrive.

In 2021 alone, BYJU’S completely acquired 10 edtech companies for a combined transaction value of $2.5 billion, as per a GlobalData report. The acquisition of tutorial chain Aakash Educational Services itself was just $50 million shy of a billion dollars. In August 2020, it acquired WhiteHat Jr, which teaches coding skills to kids, for $300 million. According to people BT spoke to, approximately 400-500 employees were sacked from WhiteHat Jr in April to June 2022. Then, around 1,100 employees were asked to leave from Toppr, a smaller rival it bought for $150 million in July 2021.

“Both managements (BYJU’S and Toppr) promised us that our jobs are safe, and in fact we need to hire more. They even promised us that our CTS (salary) will remain the same, and we may even get a hike. We got our appointment letter from BYJU’S and our email addresses were changed to BYJU’S. On June 27, without any warning, they informed hundreds of us that Toppr is officially merging with BYJU’S and they couldn’t find a suitable position for us,” a teacher with Toppr’s Knowledge Team tells BT.

Krishnan Ganesh, serial entrepreneur and promoter of bigbasket, Portea Medical and HomeLane, among others, is unconcerned. “They have done multiple acquisitions, so there will be duplicity of roles and, therefore, lay-offs too. It happens in any acquisition. Besides, all edtechs have taken up massive expansion drives to capitalise on the pandemic-induced growth opportunity. As a result of the tapering down of demand back to normal, there is expected to be some moderation in terms of what talent and how much talent is required. But the lay-offs are only a minuscule portion of the total number of jobs created,” he says.

He has a point. BYJU’S is a 40,000 people strong company today. From being a pure-play K12 player, it has diversified to professional and higher education with the $600-million acquisition of Great Learning, test prep with Gradeup, kids coding with WhiteHat Jr, and brick-and-mortar coaching with Aakash. The Bengaluru-based decacorn has also widened its geographical reach with buyouts of Epic, Tynker and Osmo in the US, and GeoGebra in Australia.

BYJU’S declined to participate in this story.

It is believed that BYJU’S has made a proposal to acquire Maryland, US-based online university degree provider 2U in a $2.4-billion deal. That is 2.5x the cost of the Aakash acquisition, and would come with a billion dollars of debt and over $67 million of quarterly cash burn. 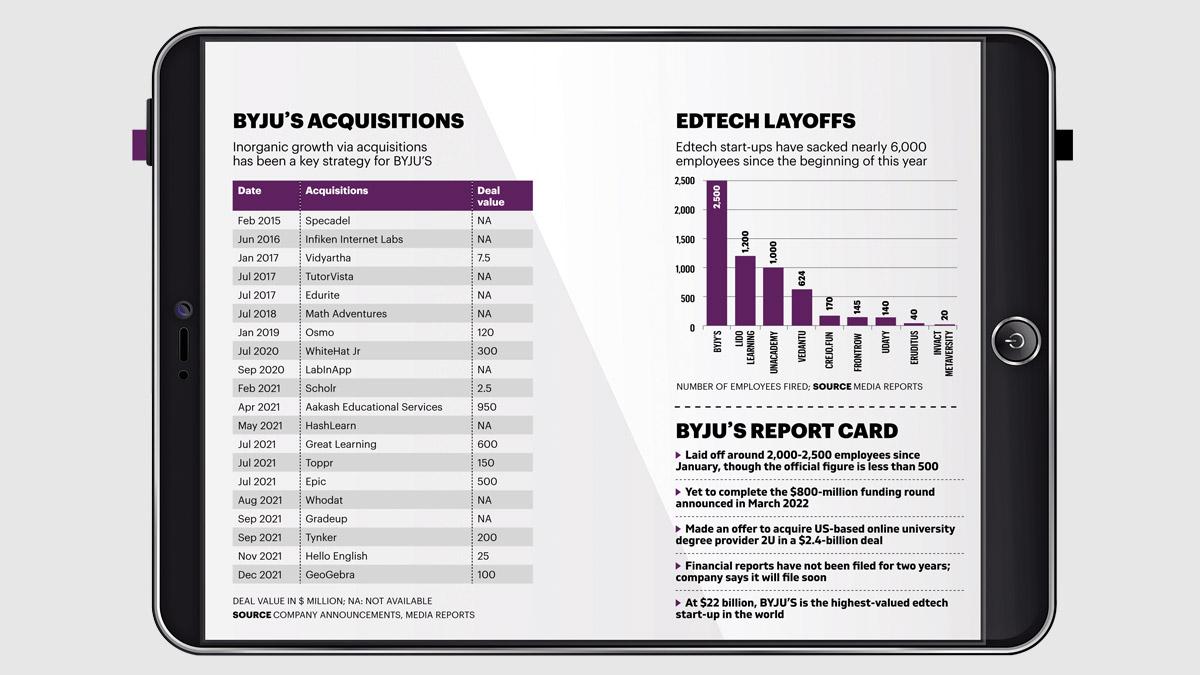 “They bought Great Learning. They want to go acquire 2U. What’s the strategy here? You offer K12 assistance and then help students for test prep to get into a course, but how will you take them to your higher ed programmes? Can your students afford a 2U, which offers degrees with US universities priced at $50,000-$80,000? In the short term, you will get lot of arbitrage and people buy the story, but in the long term, markets don’t reward such plays so well,” a late-stage investor says.

Some say BYJU’S acquisition spree is a case of buying revenue as news reports point to a doubling of its revenue to nearly Rs 10,000 crore or $1.25 billion in FY22. It has not filed its audited financial accounts for the last two fiscals. The $22-billion valuation it commanded in its last funding round is over 18 times this revenue. Even if it grows its revenue by 50 per cent to reach $1.8 billion next fiscal, the valuation is still about 12 times forward revenue.

Nasdaq-listed 2U’s FY22 revenue projection is $1.05-1.09 billion, a 13 per cent jump from $945.7 million in the previous fiscal. 2U commands an enterprise value of around $2 billion, which includes its market cap of around $750 million (as of July 15, 2022), $1 billion of debt and other liabilities. The valuation, therefore, is about 2x of its revenue. A potential deal helps BYJU’S add $1 billion of 2U revenue to its books, which takes its top line to $2.8 billion. Even at a moderate 10x forward revenue, the valuation will hit $28 billion.

Buying revenue is a scary thing, a global PE investor says: “Credit to him [Founder Byju Raveendran], he has been able to raise a lot of cash on a very high multiple. He is using that cash and debt to gobble up companies that are in a much lower multiple, and putting it all together for a fancy narrative. Whether this strategy plays out or whether the market will see through it in the

Meanwhile, the company is yet to complete the $800-million funding round it announced this March. While Raveendran has infused $400 million himself, another $250 million of commitment from Sumeru Ventures and Oxshott is yet to arrive. BYJU’S says the delays are due to “macroeconomic reasons”.

“It looks like cash is not coming on to BYJU’S table easily like it used to, otherwise why would an entrepreneur, who has taken secondary money at much lower valuation in the past, put his own money at $22 billion (valuation)? It doesn’t make sense,” the aforementioned PE investor says.

Meanwhile, reports say that BYJU’S is in discussions with a number of special-purpose acquisition companies (SPACs) to go public in the US. But with SPAC losing its sheen in the current market drawdown, it’s unclear if BYJU’S will take the risky route to listing.

“The reason BYJU’S is getting away with a lot of these is that it’s still a private investor-backed company. Given the scale, it will have to go public at some stage. If somebody is investing at $22 billion, he would expect about $40 billion in the next round. Investors at $40 billion would expect valuation to double when they exit. At present, BYJU’S is buying revenue to show some growth, especially US revenues before going public in the US. Public market investors will see through these things quite easily,” says an investor who has managed several IPOs.

Clearly, the edtech company has a lot to fix before it hits the public market. Or, even otherwise.