Many global healthcare chains and investors are pumping money into hospitals in India. This may prove to be a game changer for the country's healthcare sector.

Dr Shamsheer Vayalil, a graduate in radiology from Sree Ramachandra Medical College, Chennai, moved to the United Arab Emirates after studies. He worked there for a year and, in 2007, started VPS Healthcare, which is today among the largest healthcare providers in West Asia with annual revenue of more than $1 billion. Later, he became the son-in-law of M.A. Yousuffali, the owner of the famous Lulu malls and one of the richest Indians in the Gulf.

When he thought about expanding the business a couple of years ago, India, he says, was a natural choice. In April, he bought the 350-bed Lakeshore Hospital and Research Centre, one of the largest super-specialty hospitals in Kochi in which his family already owned a stake. Since then, he has invested Rs 300 crore on building a new block there. Three months later, VPS bought New Delhi-based Rockland Hospitals, which has three facilities in the national capital, for about Rs 1,500 crore. A few weeks ago, Vayalil was in Mumbai to discuss the acquisition of a 250-bed hospital coming up in a township being built by Hiranandani. "We have earmarked Rs 1,000 crore for expanding facilities in India in the first phase and are looking at more acquisitions," Vayalil told BT.

VPS is not an exception. The country's booming healthcare sector has been abuzz with action for a while now with several top global funds, apart from healthcare providers, on a shopping spree, scooping up new as well as established facilities. "It is not because India is my home country. The healthcare sector here is an attractive destination for overseas healthcare providers considering the potential for growth and availability of quality professionals," says Vayalil. He owns around 1,000 hospital beds in India. "Due to improvement in living standards and bright prospects for medical tourism, India offers a huge opportunity in all segments of healthcare services"

Malvinder Mohan Singh, Executive Chairman, Fortis Healthcare, sums up the trend. "Our country is vastly under-served. The demand for healthcare services continues to grow at a compounded annual growth rate of 14-15 per cent." Due to improvement in living standards and bright prospects for medical tourism (as costs in the developed world become unaffordable), India offers a huge opportunity in all segments of healthcare services and will continue to interest Indian as well as foreign investors, he says.

Hospitals and diagnostic centres attracted foreign direct investment of $3.1 billion between April 2000 and June 2015, according to the Department of Industrial Policy and Promotion. The January-August period saw 66 mergers and acquisitions. The largest number of transactions was in pharmaceutical and healthcare segments, according to VCCEdge, the data research platform of News Corp VCCircle.

In January, the Dubai-based Abraaj Group, a private equity investor, bought a 72 per cent stake in Hyderabad-based Care Hospitals, the fifth-largest healthcare provider in India with 2,600 beds across 16 hospitals in nine cities. Abraaj bought the stake from private equity player Advent International for about Rs 1,300 crore ($195 million). Sources say Temasek, Everstone, Baring PE Asia, Bain Capital and South Africa's Netcare were also in the race. Advent had bought the controlling stake in 2012 for Rs 610 crore (about $105 million) from some investors, including Rakesh Jhunjhunwala, Matrix Labs founder Nimmagadda Prasad and UK's Ashmore Group. Care was started in 1997 by B. Soma Raju and a group of professionals.

In May, Dubai-based Aster DM Healthcare acquired Ajay Piramal Group-promoted India Venture Advisors' 25 per cent stake in the Vijayawada-headquartered Ramesh Hospitals, which has three facilities with 560 beds, for Rs 110 crore. Dr Azad Moopen-led DM Healthcare has over 175 facilities - including hospitals, medical centres, diagnostic/specialty centres, pharmacies and medical colleges - in India and West Asia. Dr Moopen had forayed into India in 2001 by starting the 600-bed MIMS Hospital in Calicut, his home town. DM is building two more multi-specialty hospitals in Kerala at an estimated cost of $70 million. Last year, the group had commissioned Aster Medicity, in Kochi. Since then, it has bought standalone hospitals in Kolhapur, Pune, Maharashtra, Bangalore and Hyderabad.

In April, International Finance Corporation, the investment arm of World Bank, which had exited Rockland in the VPS deal, invested Rs 61.5 crore in Kanpur-based Regency Hospital.

But the mother of all the deals was signed in August last year when Malaysia's IHH Healthcare, the world's second-largest listed healthcare provider on the basis of market capitalisation, bought a 74 per cent stake in Ravindranath GE Medical Associates through its Parkway brand for Rs 2,150 crore. Ravindranath Associates runs the super-specialty and multi-organ transplant chain Global Hospitals. A couple of months before this deal, Parkway had acquired a 51 per cent stake in Hyderabad-based Continental Hospitals for about Rs 281 crore. Long ago, Parkway had also entered into a joint venture with Dr. Prathap Reddy's Apollo Hospitals. "Going by the funding received, it's clear that these hospitals were deemed financially and strategically lucrative"

"We have always been looking at the Indian market. We were learning, as in a big market like India you cannot go in without a strategy. We were not ignoring the Indian market but evaluating the opportunities," Dr Tan See Leng, Managing Director and Chief Executive Officer of IHH Healthcare Berahad and Group Chief Executive Officer and Managing Director of Parkway Pantai, had told BT a few months ago.

Domestic chains such as Apollo, Max and Fortis are also in the fray. In July, Analjit Singh-promoted Max Healthcare acquired Saket City Hospital in South Delhi from BK Modi Group firm Smart Health City and named it Max Smart Super Speciality Hospital. Last year, it had also bought a 76 per cent stake in NCR-based Pushpanjali Crosslay Hospital for about Rs 287 crore. While Max was focusing on Delhi, Apollo bought the Guwahati-based Assam Hospitals for over Rs 57 crore.

Do these deals prove that Indian hospitals were finding it difficult to be profitable and were not being able to attract investments? This is not the case, says Gautam Khanna, Chief Executive Officer, P.D. Hinduja Hospital. "Going by the funding received, it's clear that these hospitals were deemed financially and strategically lucrative," he says.

Malvinder Singh of Fortis says healthcare delivery is a difficult business, and given its capital-intensive nature, the gestation period can run into years. "You need to be in for the long haul, show commitment and stay invested for considerable lengths of time before you can earn returns," he says. That is why hospitals with comparatively new facilities would not mind mitigating some risk by aligning with a player who has deep pockets.

There are other reasons too. "With increased consolidation, single hospitals are facing issues related to service quality. It is also difficult for single hospitals to raise resources for latest technology. Association with a bigger brand also helps in patient acquisition," says Zahabiya Khorakiwala, Managing Director, Wockhardt Hospitals. 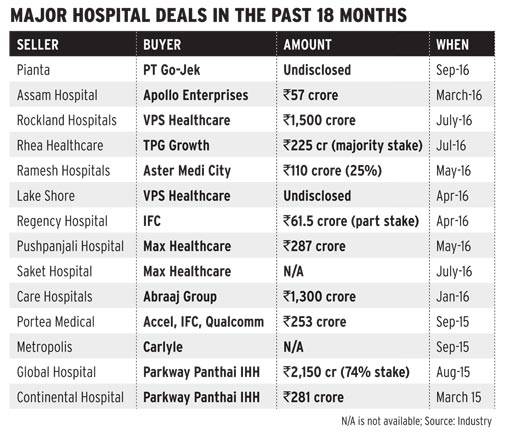 Krishnan Akhileswaran, Chief Financial Officer, Apollo Hospitals Group, says many of the recent deals went through because of the attractiveness of the offers. He says India is one of the biggest potential markets due to a huge population that can afford private healthcare and a big talent pool of doctors and other healthcare professionals. "Global healthcare chains and investors realise that if they do not invest now, they won't be able to enter India in the next five years, as there is a huge demand for maturing and near-mature facilities," says Akhileswaran. Experts say a facility with an investment of Rs 50-60 lakh per bed, or a 200-bed facility with a Rs 100 crore investment, can start getting (positive) cash flows from the third year and mature by seven-eight years if run well. "In many cases, people overinvest and mismanage facilities. Some go for fast expansion and eventually find it difficult to stay in the business," says Akhileswaran. He says he allocates only Rs 50 crore debt for a new facility that requires Rs 100 crore. The rest of the money comes from internal accruals.

Another reason is the range of opportunities in India. The country's healthcare market now includes innovative facilities such as daycare/specialised diagnostic centres, homecare services, single specialty units, etc. This not only gives investors more options but also provides them assurance that the market is receptive to innovative solutions and models.

Also, the price point here is attractive, in terms of value addition, quality of service, productivity and cost effectiveness when compared to, say, some Thai hospitals, says Dr. Tan See Leng of Parkway.

The entry of big healthcare providers and investors augurs well for India, say experts. Corporatisation has ushered in modern practices and techniques for scaling up and increasing efficiency and has had a positive influence, says Malvinder Singh. "I am bullish on the sector considering the new models of healthcare delivery such as asset-light (separate ownership of assets) and O&M (operation and maintenance) contracts that are bringing in higher efficiencies," he says.

The Indian healthcare sector has received a flood of private equity money over the past five years, and many of these investors will push for attractive returns in the next few years, says a report by professional services firm Alvarez & Marsal. "This, in many cases, will be an additional driver for improving performance," it says.

Can this threaten established domestic chains such as Apollo, Fortis and Max? Not necessarily, as it is a localised business, attracting local doctors and support staff. It will not be easy for big international chains to replicate their systems and protocols in India, say experts. "If you look at the best hospitals in the US, they have not gone beyond their homeland," says Apollo's CFO.

However, for now, all seems well on the deal front.