The textile industry in Tamil Nadu is facing a crisis due to the economic slowdown and fall in exports, forcing many spinning mills and weavers to cut production as well as workforce

A yarn unit in Tirupur. The cluster has been facing huge pressures due to fall in global trade and domestic bottlenecks.
Radhika K.T.P.

Sixty-seven-year-old P. Muthusamy is worried. The small-scale weaver from Tirupur, India's textile export hub located 450 km southwest of Chennai in Tamil Nadu, buys yarn from spinning mills and turns it into cotton fabric. He has 10 power looms, which until a year ago used to run for 12 hours a day, six days a week. Muthusamy had employed six people in his small factory, located next to his house. "We used to produce around 12,000 metres of cotton fabric a month and make around Rs 15,000 in profits. There weren't any large savings but I was able to meet the basic needs of my family," says Muthusamy. However, things changed for the worse last year. Cotton yarn exports plunged and domestic consumption of textile, too, took a hit. "I had to cut production to almost 50 per cent. Some of my workers left for better jobs in other industries. Now I employ only two people. I can hardly meet my own expenses. I can't learn any new job at this age," says Muthusamy, who started weaving when he was 15.

Like him, several small- and medium-scale players in major textile clusters of Tamil Nadu, including Tirupur, Erode, Salem and Coimbatore, are struggling due to the slowdown that has gripped the textile industry. Reports from the Cotton Textile Export Promotion Council (Texprocil), an industry body for promoting cotton exports, say cotton yarn exports have fallen nearly 39 per cent in July-September 2019 against the same period last year. In value terms, they have fallen to $1.28 billion, from $2.09 billion. "India exports about 25 per cent of its total cotton yarn produced every month," says K.V. Srinivasan, Chairman, Texprocil. "This started dropping when the slowdown started to hit the segment in the beginning of 2019. Monthly yarn exports, from an average of 100-120 million kg per month have come down to 60-70 million kg," he says. 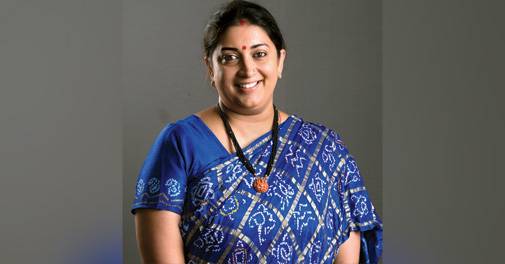 "We are aware that the cotton yarn industry has taken quite a hit after the US-China trade war. And my colleagues in the commerce ministry have dedicated themselves to ensuring that they find a solution," says Smriti Irani, Union Textiles Minister
Click here to Enlarge

The immediate impact of this has been a fall in forex earnings. "A drop of 35-40 per cent has been reported for yarn and fabric, resulting in forex earnings from this sector falling 30 per cent. This is a matter of concern for the country's economy as well as the individual industries in this sector," says Raja M. Shanmugham, President of the Tirupur Exporters Association (TEA).

The decline is indeed worrisome as the textile industry in India contributes around 13 per cent to the manufacturing GDP and 2.3 per cent to the total GDP, according to the Ministry of Textiles. The sector also accounts for 7 per cent of the industrial output (in value terms), and 15 per cent of export earnings. It also contributes 11 per cent to the country's total exports. Giving employment to more than 4.5 crore people makes it the second-largest employer (after agriculture).

While 2019 has seen a severe drop in the industry, the reasons are older.

A high 47 per cent of India's textile and apparel exports go to European nations and the US. However, India does not have free trade agreements (FTAs) with major export markets. "Our competitors, including Sri Lanka, Vietnam, Bangladesh, Ethiopia and others, have an FTA with the US and European nations. Thus, we are losing our competitiveness," says C. Devarajan, Vice Chairman, Texvalley, a B2B marketplace for the textile industry in Erode, a prominent textile cluster in Tamil Nadu. In April this year, Pakistan, too, signed an FTA with China. So, not only do Indian exporters face stiff competition, they also have to contend with an import duty of around 5 per cent on cotton yarn from India. "After 2016, we have not made any significant progress in exports," says Shanmugham of the TEA.

This duty disadvantage played out even in the opportunity that the US-China trade war presented. China used to have a 30 per cent share of US apparel imports. When the trade war began, the Indian textile industry was eyeing a share of that. "While we were able to ensure a slight increase in our apparel exports (2-3 per cent) because of this, we could not achieve a great leap. There is an import duty on our textiles while our competitors enjoy a duty-free advantage. The major businesses went to them," says Shanmugham. So, while a country like India, the second-largest cotton producer in the world, has only 7.6 per cent share of US imports, smaller markets like Vietnam and Bangladesh enjoy 13 per cent and 11 per cent market shares, respectively. 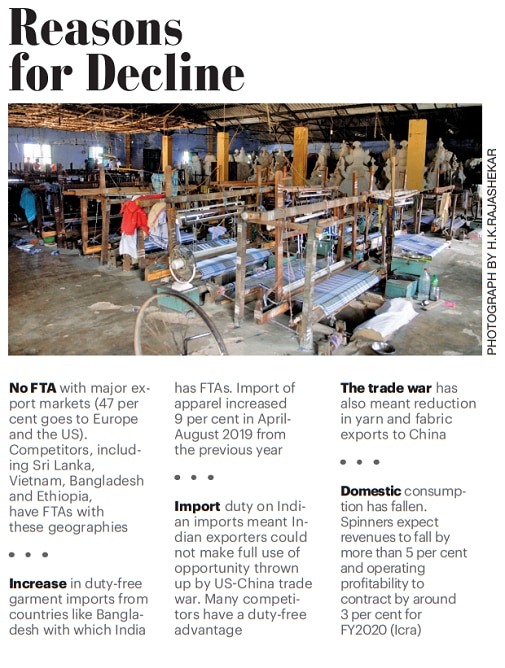 The trade war also resulted in reduction of cotton yarn and fabric exports to China. "India was one of the biggest suppliers of yarn and fabric to China. The trade war with the US has created a slowdown in China's apparel market, which has further hurt India's cotton exports," says Shanmugham. Srinivasan pegs the fall at "more than half the exports to China." Out of India's total yarn exports, 30 per cent goes to China, he says.

The reasons for the decline in the textile industry extend to the domestic market as well, mostly due to the economic slowdown and fall in rural consumption. "This has resulted in capacity reduction in textile mills. Many mills have reduced production by 30 to 50 per cent," says a representative of Coimbatore-based Southern India Mills Association (SIMA).

Another hard knock came from duty-free garments being imported from countries like Bangladesh under the FTA. "As our cost of production is higher, our garments cannot be produced or sold at a competitive price," says M. Jayabal, President of Coimbatore-based Open End Spinning Mills Association (OSMA). 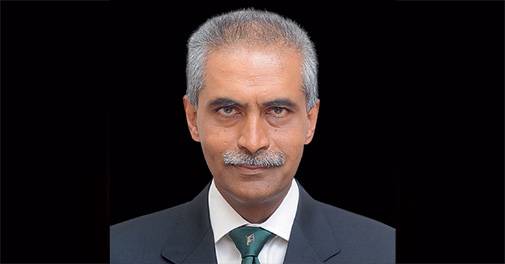 "India exports about 25% of its cotton yarn pro- duced every month. It started dropping when the slowdown began to hit the segment in the beginning of 2019," says K.V. Srinivasan, Chairman, Texprocil

The economic slowdown in India has led to delayed payments. "They are getting delayed by more than three to four months. This is hurting our working capital and loan repayment," says a yarn mill owner from Coimbatore. The state government has announced some incentives but these are inadequate.

Demonetisation and GST had already affected the industry, which is dominated by MSMEs. For instance, the Tirupur cluster in Tamil Nadu, which accounts for more than 70 per cent of India's cotton knitwear exports, has more than 9,000 textile units, which include spinning mills, dyeing units, power loom units, apparel making units, and exporters. More than 85 per cent are MSMEs. "The profit margin of these smaller textile manufacturers is very low, just 4-5 per cent. When they come under the GST net, since their margin is less than the GST rate, they are not able to compete with the bigger players," says S. Chandramohan, President of the Confederation of Indian Industries, Tamil Nadu State Council. "It is a structural issue and consolidation in the industry will help solve it to an extent," he says.

The challenges are forcing smaller companies to partially or fully shut down their operations. "In the past two years, Tamil Nadu alone saw the closure of more than 100 small-scale open-ended spinning mills. They are not able to compete in the market," says Jayabal of OSMA. 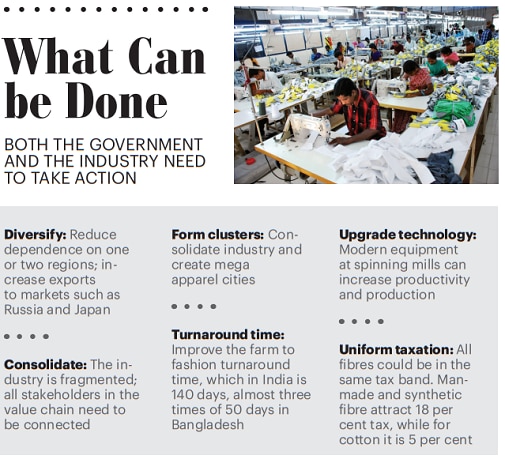 To cope, many have cut down production capacity. "The companies are running fewer looms and cutting down the working time," says S. Sakthivel, an exporter from Tirupur and executive secretary of the TEA. A weaver from Erode, who owns 15 power looms, says he has halved production. "My looms used to work six days a week. I have been running only 10 looms for the past six months. This is affecting my revenue flow and loan repayment," he says.

The textile industry is labour-intensive. Employment in it constitutes 18 per cent of the entire manufacturing industry. So, a slide will affect employment generation as well. By one estimate, a 20 per cent cut in production in a spinning mill can lead to job loss of 30-35 per cent.

"With companies cutting down production, many daily wage workers employed in these units work only for two-three days a week," says N. Chandran, Tamil Nadu State Vice President, CITU. "Three lakh workers are employed in spinning mills in Tamil Nadu. The state government has announced a minimum wage of Rs 439 per day for daily wage workers. But as the companies are not making much profit, many of them are not paying the same, he says. The scale of job loss is high, too. "In the Tirupur cluster alone, which employs around five lakh daily wage labourers, around two lakh workers have become jobless in the past one year," says Chandran.

The industry is highly fragmented and needs restructuring. "The entire production value chain is fragmented. To address global requirements, we need to consolidate all the stakeholders involved," says Devarajan of Texvalley.

To beat competition from countries like Vietnam and Bangladesh, apart from FTAs, the industry needs to scale up, for which there is a need to modernise and improve efficiency. "We need to create mega apparel cities like China, which has individual apparel companies that are exporting garments worth Rs 21,000 crore, while the whole of Tirupur exports garments worth only Rs 26,000 crore per year. We need to scale up so that mid-sized companies can improve and capture big volumes which will attract partnerships from countries across the world," says Prabhu Damodaran, Convenor, Indian Texpreneurs Federation, a textile entrepreneurs association. 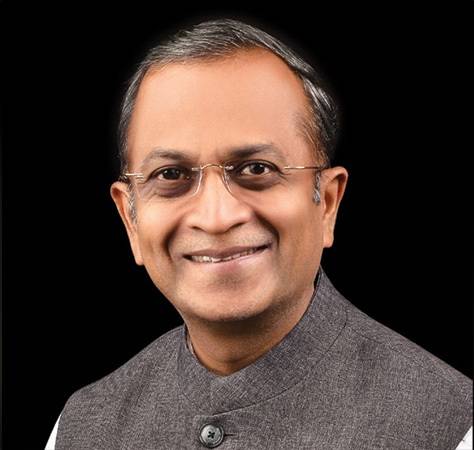 Use of better technology is needed in each layer of production to improve the turnaround time. "From farm to fashion, our turnaround time is at least 140 days. In Bangladesh, it is only 50 days," says Jayabal.

Market diversification is also needed to reduce concentration risk and increase volumes. Currently, India is more focused on the US and European markets. The volume of exports to countries like Japan or Russia is very thin. "These are big markets. For instance, Russia imports around Rs 65,000 crore worth of textiles every year, but India's share is a mere Rs 500 crore," points out Damodaran. "Market diversification is very important in job creation as it will divide the risk. Every $1 billion of additional exports in apparels can create 1.5 lakh jobs, which is not possible in any other industry," he adds.

The industry also wants a fibre neutral policy to improve exports. "The government should bring all raw materials, cotton and man-made fibre, under one tax rate. Currently, man-made fibre attracts an 18 per cent rate," Damodaran says.

To address these challenges and to pull the Central government's attention, various associations of textile industry have formed a committee - National Commission on Textile and Clothing - to bring in all segments of the industry under one umbrella. It has submitted a memorandum to the textile ministry, the commerce ministry and the finance ministry. "The textile ministry has asked stakeholders to give a joint representation. We have done so and are waiting for them to take adequate measures," says the representative from SIMA.

A sharp slump in exports is an issue that will need short-term as well as long-term revival measures, especially considering the employment that the industry can generate.