Analysts tracking the automotive industry say that the ban may change the buying cycles in the largest market. Companies are evaluating options to bring new fuels like biodiesel as a lesser polluting option.

Delhi-NCR accounts for 15 per cent of the three million vehicles sold (across all segments) in India, but for the luxury car brands, it generates about 25 per cent of total sales. Between January and March 2015, Mercedes-Benz sold around 800-900 cars in the NCR region, while BMW sold 500. While the NCR market's customer would be starved for quality - with top-notch offerings like Audi Q7, Jaguar XJ, BMW 7 Series, Range Rover Sports, Maserati Quattroporte and Porsche Cayenne not available - for the car makers, these are gloomy times considering the size of the NCR market, and the fact that petrol cars probably comprise less than 3 per cent of the total 35,000 luxury cars sold in India per year.

"The decision is going to emerge as a major setback for all premium car makers in India, but some may be hit harder," says Amit Kaushik, Country Head, JATO Dynamics, a UK-based automotive consulting company. "These sudden policy changes will force automakers to rethink their India product portfolio and expansion strategies in this emerging ambiguous environment."

Some players like Audi, BMW and Volvo are 'marginally' lucky, as a majority of their diesel models have engines missing the 2,000-cc threshold by a whisker. That gives them a clear advantage over the raging market leader, Mercedes-Benz, whose entire tally of 11 volume models has been shunted out of its most significant market until March 2016. "Diesel forms approximately 80 per cent of our volumes as we have gradually developed this portfolio on strong domestic demand; in fact, larger SUVs like the GLE and GL don't have a petrol option, and also the CLS Coupe is available only in diesel," rues Roland Folger, the newly appointed MD & CEO of Mercedes-Benz India. 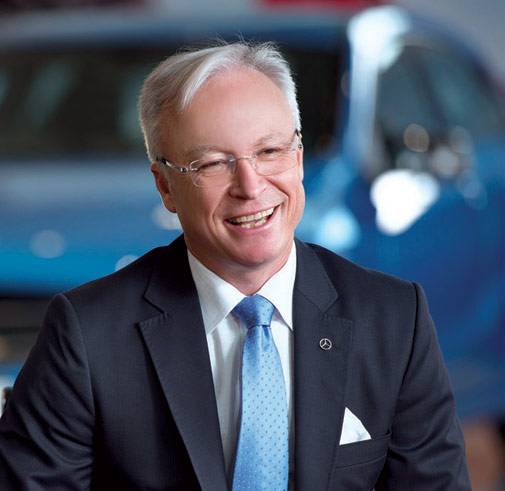 The company vociferously contested the ban in the Supreme Court, and is now putting together documentary evidence to prove that diesel is not dirty and it conforms to all regulatory requirements. For the time being, its twin dealers in NCR are selling only petrol cars, awaiting clarity from the court's hearing scheduled on January 20. The focus is also to market the 10 sporty AMG models it sells in India, along with regular petrol variants that together form 20 per cent of its cumulative sales. "We are working on a strategy to instil confidence in the dealers and ensure that we have products which the customers want," says Folger. "For example, we have a strong petrol portfolio and have customers who prefer a petrol mill only. Hence, we have to look at options like these to counter the situation."

The unexpected ban is likely to extend a huge advantage to Mercedes's archrival, Volkswagen-owned Audi, which has been desperately trying to regain leadership in the Indian luxury car space after it lost the coveted slot to Mercedes-Benz in 2015. However, Audi India Head, Joe King, told BT that the situation is not as simple: "As a manufacturer, we conform to all the mandated norms and surprisingly the problem has cropped up. However, the need of the hour is a multi-pronged, 360-degree, cohesive approach to look at the entire environmental issue holistically, without affecting the long-term business environment." The bulk of Audi's sales originates from its 1,968-cc diesel engine, unlike Mercedes-Benz's 2,143-cc diesel.

Even BMW is a tad lucky. Many of its entry-level cars are strapped with a 1,995-cc engine, but, unlike Audi, only a few models like the entry 1 Series and 3 Series sedans, and the X1 and X3 SUVs would be able to make the customer's list. For Audi, only four cars face the ban, while 10 of its models available in India would continue to sell unabated. The sales tally is seven for the regular BMW along with its sporty and expensive M Series range that largely caters to motoring aficionados. The situation is causing concern for the Tata Motors-owned Jaguar-Land Rover (JLR) as well. All its six SUVs under the Land Rover badge are sold in diesel and the two highest-sold sedan models - Jaguar XF and XJ - are sold with the similar fuel. 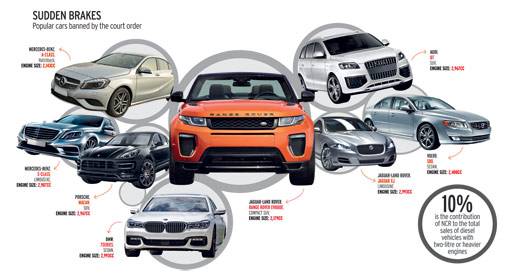 For Mercedes-Benz, the bigger jolt is the long-term impact on its larger design of market leadership. For the last reported sales, Audi had beaten Mercedes-Benz to the No. 1 spot in India by selling just 79 more vehicles for the March ended 2015 fiscal. It sold 11,292 units, compared to 11,213 for Mercedes-Benz. However, Mercedes-Benz had been closing in on Audi and, in the first nine months of 2015, had attained leadership with sales of 10,079 units, close to its entire 2014 volume. Audi has refused to share its recent sales.

But for Audi, the ban could not have come at a better time. Stung by the global revelation of Volkswagen's admission of cheating on diesel emission norms in the US and other major markets last September, Audi had recalled all its cars sold in India, which was part of the 315,000 cars recalled by Volkswagen India, translating into the largest ever recall. Today, it is the same 1,968-cc engine that has come to Audi's rescue. All its top sellers like A3, A4 and A6 sedans as well as the Q3 SUV carry this engine, much to the chagrin of its rivals. Global luxury car market leader, BMW, which is now No. 3 in India, may have the last laugh as only a few of its two dozen-strong portfolio sold here - 5, 6 and 7 Series sedans, along with SUVs X3, X5 and X6 - are under the courts knife.

The Future of Diesel

While Mercedes-Benz's Folger says he still hasn't seen any trend inclining towards petrol, he adds he would "not be surprised if such a preference emerges". The company is planning to reinforce its new product strategy with a strong petrol engine portfolio to support market demand and the possibility of a complete ban on diesel, something India had enforced two decades ago.

The government had restricted diesel only to agriculture, commercial vehicles and industrial use, and it was not allowed as an automotive fuel till 1995. The relaxation came only in 1996/97, initially to maintain the viability of the quintessential Ambassador that was allowed to strap a diesel engine to compete. Later, the foray of the country's largest automaker (by revenue), Tata Motors, into India's passenger car market with the diesel Indica hatchback virtually created a market for this second fuel.

Now the hot topic of environmental impact from motorised traffic specific to diesel has posted a bigger question on the future of this fuel. Besides completely dominating the luxury market, it also controls 45 per cent of the mass car market. According to industry experts, about 400,000 units of diesel vehicles with two-litre or heavier engines are sold in the country annually. And of these, around 10 per cent sell in NCR. Diesel dominates many developed markets like Europe and has been growing steadily in the US, but its efficacy as a clean fuel has come under a cloud. "The World Health Organisation had announced diesel as a known carcinogen. We welcome the court's decision," says Parthaa Bosu, India Director for Clean Air Asia, a Philippines-based environmental agency. "Nevertheless, the problem lies with in-use vehicles that are probably bigger or equally polluting. Many poorly maintained diesel cars less than 2,000 cc have been seen spewing smoke in Delhi's streets and remain untouched by the ban."

"Our understanding is if the earlier Bharat Stage I/II/III vehicles are phased out, it would be more effective in controlling pollution than restricting registration of new BS IV vehicles," says T.S. Jaishankar, Toyota Kirloskar Motor's Deputy MD-Commercial, after the ban totally curbed sales of its bread-and-butter models like Fortuner and Innova, in NCR.

Meanwhile, Swedish luxury carmaker Volvo is planning smaller engines for India and a shift to greener hybrid and electric. "Globally, we are shifting to smaller sub-2 litre engines. Our XC90 is the only model that directly breaches the banned 2-litre engine displacement size. Even for this, we are launching the XC90 T8 in India in 2016, with a petrol plug-in hybrid. Our global ambition for 2020 is to have 10 per cent of Volvo's global sales from electrified cars," says Tom von Bonsdorff, MD of Volvo Auto India.

In fact, BMW had introduced its hybrid range - the BMW i8 - in mid-2015, but the whopping Rs 2 crore price tag found very few takers.

Analysts tracking the automotive industry say that the ban may change the buying cycles in the largest market. "The metro customers may now be more aware of their motoring needs. Besides keeping their vehicles in good condition, they should be ready to pay slightly more to induct environment-friendly vehicles in their portfolio," says Abdul Majeed, Partner, PriceWaterhouse India. He adds that while the new developments would surely impact automakers, it might lead to more innovation on diesel technology to address the sensitive emissions issue and also promote the use of alternative fuel and electric vehicles.

Companies are evaluating options to bring new fuels like biodiesel as a lesser polluting option. Local players like M&M are capable of producing biodiesel vehicles quickly, even as the steam emitting fuel cell hydrogen car technology may still be many decades away. ~