How Salil Parekh Turned Around Infosys

Salil Parekh has brought credibility and growth back into the fold of the pioneering IT services company, which had fallen upon difficult times

A soft demeanour is not always considered a virtue in business—that is the widespread belief. However, nothing could be further from the truth when one speaks of Salil Parekh. In 2018, he was brought in to salvage the business and image of IT services major Infosys after an embarrassing public spat played out between Infosys’s founders and then CEO Vishal Sikka, severely denting the confidence of both clients and investors. Parekh walked into that tense situation having to balance many equations inside and outside—keeping the promoters in good humour and also not losing the trust of clients. Slowly but firmly, the mild-mannered Parekh shepherded the company through the difficult phase—no drama, no public posturing, no demonstrable aggression—and brought it strongly back onto the growth path. So strong that he was an easy winner in the Large Companies category in the BT-PwC India’s Best CEOs ranking.

Growth rates have quadrupled, revenues and profits are burgeoning, big deals and big clients are climbing at a fast clip, and high profit margin levels show Infosys has retained its traditional strength. And the stock is the market’s darling once again—market cap has climbed 216.87 per cent to Rs 7.12 lakh crore on February 25 from January 2, 2018, the day Parekh walked into Infosys’s corner room as its CEO & Managing Director.

Typically, though, he downplays that part with a poker face. “My mandate when I joined was to get Infosys to a path that is more connected with the client,” says Parekh, speaking to us from the company’s vast campus in Bengaluru, looking dapper in a suit and tie. “We needed to be more relevant and that was really it.” He explains how a greater understanding of clients’ needs against what Infosys can do is what really gets him going. The focus on the client is not just a vital checkbox to tick, but is almost done with maniacal obsession.

Of course, there is also interest in growth through buyouts, and he speaks of it existing in both verticals and geographies. There have been setbacks, too, with much-publicised glitches in the new Income-Tax portal being prominent. But in the larger context, Parekh remains optimistic about what the future will throw up.

An aeronautical engineering graduate from IIT Bombay, with a masters in Computer Science and Mechanical Engineering from Cornell, Parekh likes to spend time in an organisation, just like many of his contemporaries. Before taking on the Infosys job, he was a veteran of 25 years at Capgemini, where he was last a member of the Group Executive Board. That was preceded by an eight-year stint at Ernst & Young as a partner. A Bollywood buff, Parekh brings to the table a multi-industry and multi-geography understanding. So, what did he do to set things right at Infosys? “We took a few decisions that worked out well,” he opens up. “The question asked was: what should we do to be most relevant?” The approach, he explains, was first based on digital transformation. That has played out very well, with digital revenue at 58.5 per cent today of the overall pie, from 25.5 per cent in 2018, and the number of $100-million accounts almost doubling from 20 to 37. “I think we were fortunate when the digital strategy was put in place. It quickly aligned with a scenario (the Covid-19 pandemic) where our clients moved to cloud, data analytics and cloud security,” says Parekh. That new reality also meant the Infosys team had to up its game. Employees were reskilled in new technologies on Infosys LeX, a platform developed by the company as a next-generation learning solution, meant to look at talent transformation. This could be done on their mobiles.

Another key was automation. “We saw many clients of ours needed technology and that made the use of AI and ML necessary, only to increase efficiency. By doing that, they could now free up some of that spend to move it to digital transformation,” he points out. Finally, it came down to the team and the concept of One Infosys, “where everyone was working together for the benefit of the client”.

To Parekh, it meant taking the work done within the company to the client and becoming part of a larger transformation programme. “All these put together formed the roadmap, and I can say we are very much in that phase of acceleration. Four years ago, our revenue growth rate was about 5 per cent; last quarter, we were at 21 per cent. Besides, we have grown tremendously on client connect, plus being at the forefront of digital branding in terms of how we are now perceived.”

According to Omkar Tanksale, Senior Research Analyst at Axis Securities, over the period of the past two years, Infosys has combined leveraging its execution prowess with a robust order book. “The company is well equipped to capitalise on the huge demand for digital services. Besides, it has undertaken several measures to control operating costs while continuing its focus on the revenue growth momentum,” he emphasises. Its digital platform, Cobalt, to him, along with the geographical presence and vertical-wise specialisation, “are expected to help in capitalising on the strong demand across verticals”.

There are other positive outcomes of this effort. Amit Chandra, AVP-Institutional Research (IT), HDFC Securities, is clear that the recent increase in guidance by 250 bps to 19.5-20 per cent is a clear indication of the management’s confidence. “Growth has been driven by strong sales and execution capabilities. Infosys’s large deal TCV (total contract value or how much it is worth after execution) is up around 2x from pre-Covid-19 levels and the pipeline remains strong.”

Parekh is a strong believer in the importance of a team doing well. “The foundation of Infosys is very strong. For me, it is really a question of enabling the team to maximise their potential, plus just being more aligned to the client,” he says. The question most often asked relates to the role of the promoters, an issue that, in the past, has been contentious for all the wrong reasons. To Parekh, the promoters “are visionaries and I am available to them anytime”. His boss is Nandan Nilekani, Co-founder and Chairman of Infosys, a person known for his networking skills and the ability to tactfully manage a tricky situation. “I seek Nandan’s guidance on a regular basis,” says Parekh.

The nuanced acquisition story is one that stands out in Infosys under Parekh. “The growth engine for the company has been largely organic, with the acquisitions being done for capability and filling some gaps,” says HDFC Securities’ Chandra. What are these gaps? “There are a few specific spots,” says Parekh. “For instance, we have to deepen our cloud capability and also expand our footprint in some geographies.” Almost gently, he mentions the fact that Infosys has “a strong balance sheet with $4 billion in cash and no debt”. 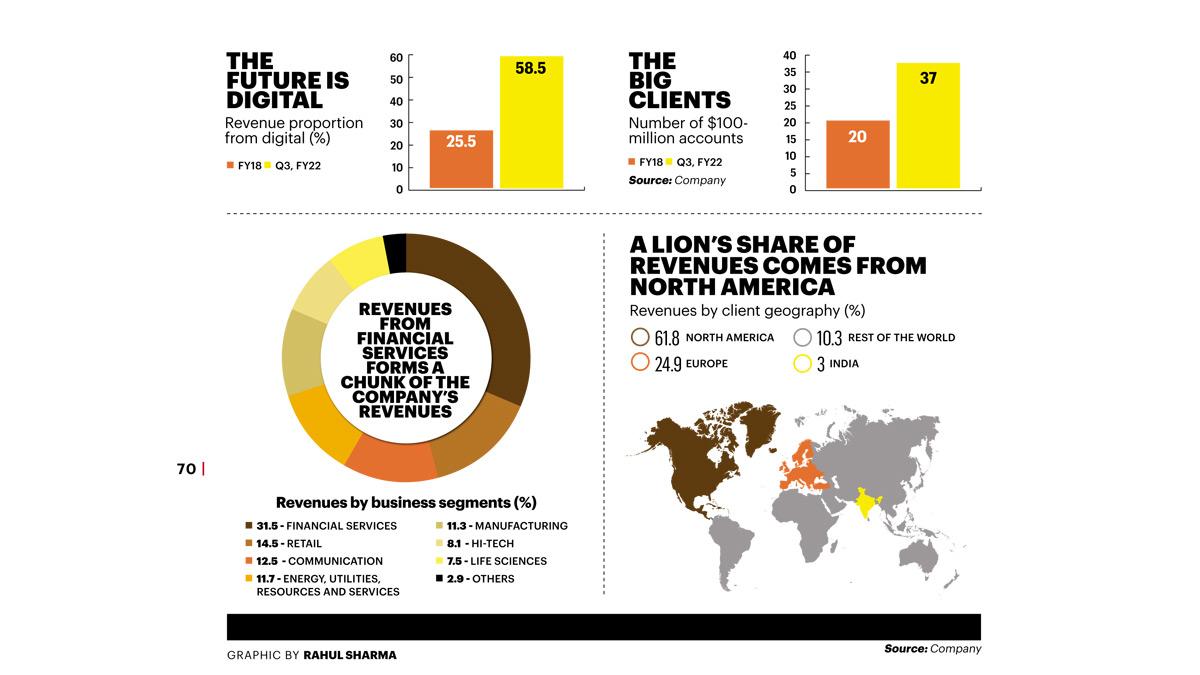 Inorganic growth is important but it’s not as if he has a war chest. “Cloud and SaaS are good opportunities. Acquisitions are very much a part of our story,” he says. According to Chandra, Infosys is very strong in the North America region and is looking to expand into Eastern Europe and Australia: “With the new delivery model, expansion in newer geographies has become easier and the talent has also become very fungible. Infosys has very strong partnerships with the hyperscalers (such as Amazon Web Services, Google Cloud and Microsoft Azure), and the growth rate is aligned to the hyperscalers’ growth.”

Axis Securities’ Tanksale gives Infosys credit for “superior strategies in terms of acquisitions and expanding inorganically”. He points out that all the buyouts have been capability-based. “That has helped in providing specialised services in the respective verticals and also bolstered its foothold in geographies,” he says. Citing examples such as Fluido, Brilliant Basics, Simplus, Stater, Blue Acorn and the Daimler partnership (the last being a contract won), he says, “they have played a key role in helping the company achieve a strong foothold in the automotive vertical”.

In an era of cutting-edge technology, Parekh’s strategy is well laid out. The flavour of the season is blockchain and he admits it is critical for Infosys. “When it comes to tracking data, it is a very effective approach. A good example is the payment side in financial services,” he explains. At the same time, he emphasises that cloud, data analytics, and AI are at the top of the four pillars of the company’s new growth story, followed by blockchain.

Tanksale maintains that the Infosys leadership “implemented multiple key initiatives to fuel its growth that have been bearing fruit for a while now”. He outlines areas such as investing in digital capabilities and energising the core by infusing AI and automation, which helped in capitalising on demand. “Again, reskilling its employees at the scale of the client was important, apart from hiring in local markets leading to cost control. We believe Infosys will attain double-digit revenue growth over the next three to five years,” says Tanksale.

The five-year horizon is crystal clear in Parekh’s mind. “Both as a business and as a company, we are in a very good position. We must be vigilant in connecting with the client… We do not want to be complacent.” The determination, even in that soft tone, is unmistakable.