When Prime Minister Narendra Modi took charge in May last year, corporate India was gung-ho about economic and business prospects. Indeed, expectations from the new government were sky high. But nearly a year-and-a-half later, the unbridled optimism is fading fast, as is reflected in the latest Business Today-C fore Business Confidence Survey that has registered a fall for the third consecutive quarter.

The survey shows, on a scale of 100, a dip in confidence level to 55.4 in the July to September period, down from 57.4 in the previous three months and 60.4 in the January to March period. It is the lowest level for the index in the last six quarters. Market research agency C fore quizzed 500 CEOs and Chief Financial Officers across 12 cities for the survey.

From early 2014, confidence had started inching up, reaching its third-highest score of 62.2 in the October to December period. (The survey was launched in the last quarter of 2010/11.) But the optimism began to fizzle out from January this year. The drop in the index value indicates that the macroeconomic situation is taking longer to improve than expected. A large majority of parameters in the survey show either a decline or no improvement over the previous quarter.

Take the overall economic situation, for instance. 66 per cent of the respondents say they don't expect any change in the October to December quarter. The corresponding figure in the previous survey was 37 per cent. Similarly, for other broad indicators - overall business situation and financial situation - more respondents feel things are likely to remain unchanged. Crucial parameters, including exports, imports, hiring, profits and private sector investments, have registered a sharp fall. "It is taking time to revive the economy because various reforms are stuck. We have to wait for a couple of quarters for sentiments to pick up," says U.R. Bhat, Managing Director at Dalton Capital Advisors. Some 61 per cent expect exports to drop in the current quarter as compared to 51 per cent in the previous survey. This is in line with the exports data from the commerce department. In September, exports fell for the 10th straight month - by 24.3 per cent - to $21.8 billion. D.K. Joshi, Chief Economist at CRISIL, says demand from destination countries has fallen sharply. The biggest drop is witnessed in Asia, which contributes 50 per cent to India's exports. "Asia is slowing down. The prices of export items such as petroleum products, gems and jewellery and cotton have dropped considerably, which is affecting the exports number in value terms," he says.

The exports slump has coincided with a sharper drop in imports, which has kept trade deficit low. Imports fell 25.1 per cent year-on-year to $32.3 billion in September. Forty-eight per cent expect imports to remain weak in the October to December quarter, up from 36 per cent in the last survey. Thirty-seven per cent expect profits to deteriorate in the current quarter. It is slightly higher than the last survey when 32 per cent of the respondents were expecting profit erosion. Joshi says that profits are a function of external and internal demand. "Both of them continue to remain weak," he says.

Poor consumer demand is indeed taking a toll on private sector investment and capacity utilisation. The corporate sector is not investing fresh capital and even the existing capacities are not fully utilised because of weak demand. Some 43 per cent don't see uptick in private sector investments and industrial activity in the current quarter while some 32 per cent don't expect improvement in capacity utilisation and consumer demand in the current financial year.

Low capacity utilisation is the key challenge faced by most industrial sectors. According to a CRISIL study, for 10 out of 12 large industrial sectors analysed, current capacity utilisation is lower than their five-year average. The ratings agency expects private investment cycle to kick off from the financial year 2017. Bhat of Dalton Capital Advisors says that while private sector investment will take time to restart, the government is doing the right thing of keeping public investment at healthy levels. "Oil marketing companies and railways have chalked out plans to make substantial investments going forward."

The rural demand, especially for consumer goods and automobiles, is impaired by bad monsoon for two consecutive years. "Until there's a significant improvement in demand, I don't see change in confidence levels," says Siraj Chaudhry, Chairman of agro-processing company Cargill India. Hiring is another area where the situation has been unimpressive for two consecutive quarters. The survey shows that 46 per cent expect hiring to remain weak in the current quarter, which is slightly better than the previous survey (48 per cent). 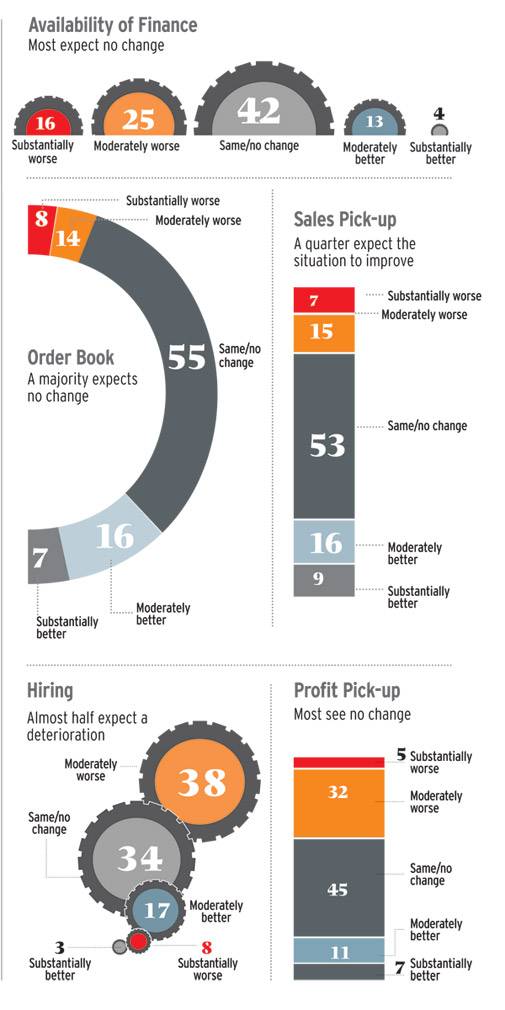 The survey points out that the availability of finance will remain a big issue. Some 41 per cent believe it will be tougher in the current quarter. In the last survey, the corresponding figure was 33 per cent. "I don't think finance should be an issue for large companies. Small and medium enterprises, which are dependent on banking system for their finance needs, may find it challenging. Banks are finding it difficult to lend to marginal borrowers due to high NPAs (non performing assets) in the system," says an economist.

A vast majority - 66 per cent - hope that finance costs will go down in the October to December period. The Reserve Bank of India, in its fourth bi-monthly monetary policy last month, reduced the repo rate by 50 basis points to 6.75 per cent. This was largely a consequence of lower consumer inflation, modest pick-up in the growth momentum and long-pending demand from industry to bring down the interest rates.

Dwindling private sector confidence is not a healthy sign for the economy. The government has to push ahead with the reforms process to ensure that the economy stays on the high growth track.