Looking for the Thump

Royal Enfield is inching towards the end of its purple patch at a time rivals have lined up new launches to take it head on. Can its new bike, Meteor 350, herald the start of another bull run?

The day Royal Enfield launched Meteor, its latest cruiser motorcycle and the most important launch for the domestic market since adventure tourer Himalayan in 2016, 46-year-old Ajay Verma ambled into the company's showroom in Noida for a dekko. Verma, who is a father of two and employed with Indian Railways, had been pining for an Enfield for close to a decade but did not buy for one reason or the other - until the Meteor happened, or so it seems.

"It is one of those things for which the heart says yes and the mind says no. I own a car, so I don't know how much I will ride this. My wife doesn't support the buying decision either," he says. "I used to ride a friend's Bullet in college. I have always wanted to own one. I couldn't resist this one (Meteor). It feels just right." 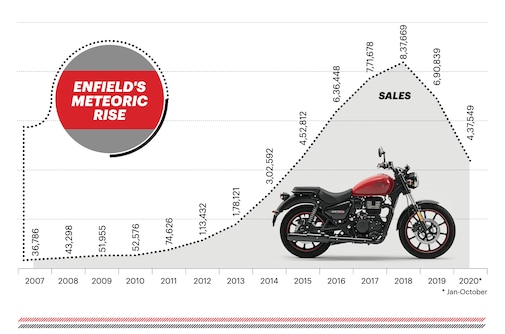 Down south, in tech city Bangalore, 40-year-old Rahul Singh, an HR executive at a multi-brand retail firm, is also eager to check out the new bike. Unlike Verma, he is not sure if it is best suited for him among the six-odd models that Enfield makes. All that the father of a young son knows is that he wants a Bullet. He rides a Honda Activa scooter to work every day instead of his hatchback to avoid the infamous Bangalore traffic. He is also certain his wife will not approve, but like Verma, is ready to earn her wrath on this one. "If it's a bike, it has to be a Bullet, everything else is a compromise," he says.

Like Verma and Singh, lakhs of people in late 30s and early 40s, eager to relive their youth, fall for the charms of Bullet every year. If they were in the US, they would have opted for the mighty Harley Davidson, as the appeal is similar, though Enfield has a broader reach and has, in the last decade, grown its customer profile to also include Generation Z college students and millennials, who are now young office-goers and professionals. This has helped it achieve explosive sales growth from just a little over 50,000 bikes in 2010 to 8,37,669 in 2018. In 2015, it overtook Harley Davidson as the world's largest cruiser bike maker by volumes, a position it has held on to comfortably, while being one of the world's more profitable automobile makers.

"The Royal Enfield bike journey is almost 120 years old with lots of ups and downs, but in the last decade, we have had a very strong run, the strongest in our history," says Siddhartha Lal, Managing Director of Eicher Motors, the parent firm of Royal Enfield. "We have stayed true to the idea of making simple and pure motorcycles. This single-minded devotion is a big reason for our success." 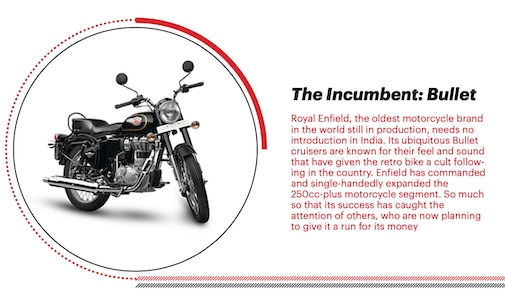 The rise of the company over the last decade after it transformed its bikes from unreliable and rickety pieces to modern, durable and stylish machines, while adding new products and features, has been well-documented. However, it hit a purple patch after 2018 that was more intense and long-lasting than what anybody had thought. In 2018, as it clocked its highest-ever annual sales of over eight lakh bikes, its growth slowed to single digits for the first time in eight years. The following year, sales declined for the first time in two decades and rather sharply at that -17.5 per cent.

The decline could be blamed on multiple factors such as poor economy, high base or law of averages. But the biggest was brand fatigue as a result of high visibility on highways, streets and alleys of India. The halo was also diminished by the fact that the waiting period for a Bullet or a Classic fell to zero; it used to be two months. This calendar year would have anyways been bad due to the near three-month pandemic-induced lockdown (Enfield is expected to close the year with sales of 5.5 lakh, pushing the company back by five years). 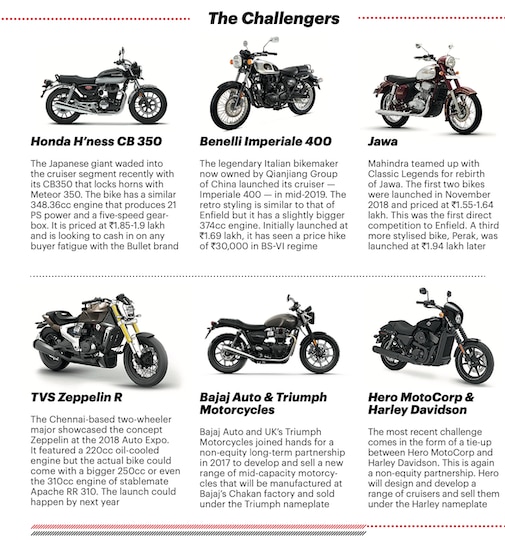 "There is definitely an element of brand fatigue now. The growth story of Enfield started slowing down before the rest of the industry and it suffered a decline pre-Covid as well," says an analyst with a brokerage firm who did not wish to be quoted.

That is why Meteor is critical for Enfield. The 350cc bike, a successor to Thunderbird that has been developed from scratch, will be the company's mainstay in cruisers. The company is also looking to diversify and reduce dependence on the Classic and Bullet 350 that account for more than 80 per cent of its India sales. "Royal Enfield is no longer a niche but a mainstream company. So, going forward we will not see the stratospheric growth of the past," says Jinesh Gandhi, Senior Vice President, Equity Research, Motilal Oswal. "Meteor is an important product not so much from a volume but a technology standpoint. This new platform will be replicated in its more volume-centric products, which will be key for Enfield in thwarting rivals."

But this is exactly what the company is trying with Meteor. It has taken the company over four years to develop the model. The company says the wait will be worth it as they have built it painstakingly and from scratch to get it just right.

"We have built a 100 per cent new bike from grounds up which will bring an absolutely new experience to cruising in India. It's inspired by our history and past successes but we want to break new ground with it. Thunderbird has been the definitive cruiser in India for nearly two decades. Meteor will take it to a new level," says Lal. He believes Meteor can expand Thunderbird's volumes - peak sales of 71,327 in 2018 - by as much as 50 per cent and become a key arsenal in Enfield's armour.

"We believe we can grow the cruiser segment. India has millions of kilometres of roads and the network has changed tremendously over the last decade. People want to travel and explore more. So, the segment can grow a lot, may be by 30-40-50 per cent year-on-year because it is still a small part of the overall mid-size market. The headroom is there," he adds. "We know the customer in this segment better than anybody else and so understand the trade-offs - the need for a long distance cruiser which is refined and also a comfortable everyday commuter. That is where Meteor delivers."

Coming Up: Competition in Spades

Enfield is also bracing itself for a wave of competition in the next few years. Its mind-boggling sales have not gone unnoticed and almost everybody wants a piece of action. After tasting failure with its standalone two-wheeler venture, Mahindra & Mahindra has lent support to Classic Legends, founded by Anupam Thareja of Phi Capital and Boman Irani of Rustomjee Group. They re-launched the Jawa brand in 2018 which, like Enfield, rode on its retro looks and nostalgia factor and offered Bullet the most direct competition.

Italian bike maker Benelli, now owned by China's Qianjiang Group, has already launched its Imperiale 400. The most serious player so far, Honda, launched H'ness CB350 in late September. The bike takes Meteor head on with very similar specifications, a price tag of Rs 1.85-1.9 lakh and the Japanese firm's pedigree. The company makes no bones about who it is trying to outdo; it says it has worked extra to give the bike a distinct thump, an obvious reference to Bullet's roar. "From the beginning, we were clear that we needed a very distinct sound. That was one of the first targets for the engineers," says Y.S. Guleria, Director, Sales and Marketing, Honda Motorcycle and Scooter India. "H'ness CB 350 is going to cater to the mid-sized motorcycle customer. It is a very exciting segment for us. We have been keenly watching the space for a couple of years. It is growing the fastest and offers great potential for growth and innovation."

Honda isn't alone. In 2017, Bajaj Auto joined hands with Triumph Motorcycles of the UK to develop a range of mid-range motorcycles for India and other developing markets. The first of these will hit Indian roads in 2022. Another homegrown major, TVS, is also readying a mid-range cruiser, Zepellin, first showcased at Auto Expo in 2018.

Then, more recently, Harley Davidson exited India but entered into a distribution tie-up with Hero MotoCorp, India's largest two-wheeler maker. Though initially Hero will oversee sale of Harley's existing high-end bikes in India and ensure business continuity, the tie-up will also lead to development of a range of 300cc and above motorcycles by Hero's in-house R&D that will be sold under the Harley nameplate.

These will be tough tests for Royal Enfield but it is typically unflustered. "Good thing is that more players are coming into the mid-sized segment. It has been too lonely all this while. We are excited with the onset of competition. It will make this segment more exposed and attract more customers," says Vinod Dasari, Chief Executive Officer, Royal Enfield. "We are very strong in this market and are not sitting idle. We are not worried about what others are doing. We keep an eye on them to understand what they are up to, but from our perspective, we just need to do more of what we are doing and succeed at it."

While the company has its own plans for capturing markets overseas, countries in South East Asia, Latin America, some in Europe and the US, where its Interceptor twins are the spearheads, the rivals' strategy of joining hands with global players for technology doesn't deter it in India. Lal says lack of technology was a challenge for them a decade ago but not now when they are well-placed to compete with anybody. "Perhaps it is still required for some people but we have, on our own, come a long way. A decade ago, we were looking at technology from overseas as our capability was not up to the mark. Instead, we decided to build our own capability and now don't have to rely on a third party," he says. "In some ways, partners do help, but in other ways, there is always some pull and push in wrong directions. Everybody has their own vested interest. We do not need anybody for future capability or enhancement."

From a position of strength, statements like these do not sound inappropriate. Time will tell whether the company has, at least in India, peaked or is taking a step back for the next jump to even greater heights. Meteor will indicate if the Enfield magic is intact.

In a country of 1.3 billion where penetration of two-wheelers is low and leisure biking is still taking off, selling a million-plus bikes a year may not be as difficult as it sounds. "Some people may not like our bikes and that is alright. If somebody wants a super sports motorcycle, we tell them to go somewhere else. We don't make the fastest or heaviest or cheapest motorcycle. Other players do that very well and we have no desire to step on their toes," Lal philosophises while still sounding matter of fact. "As long as there are enough and growing number of people who love what we do, we will be alright, and happy."