With the post-lockdown economy still to pick up, highly leveraged companies are looking at ways to reduce debt

Vital statistics often hide more than they reveal. India's 20 most-leveraged private sector companies, excluding those that have filed for bankruptcy, have a combined debt of Rs 15.4 lakh crore - almost half of the government's budget expenditure planned for FY21. The first five companies in the pecking order - Reliance Industries Ltd (RIL), Vodafone Idea, Bharti Airtel, Larsen & Toubro (L&T) and Tata Steel - account for Rs 7.7 lakh crore, according to the latest available numbers for FY19.

Even though they do not represent FY20 numbers since most firms are yet to finalise their annual reports, the debt burden of most companies is unlikely to see an erosion, except Reliance Industries, which recently got Rs 1.16 lakh crore from foreign investors by selling 24.7 per cent stake in subsidiary Jio Platforms Ltd (JPL). All the other companies in the pecking order are yet to come up with their debt-handling plans at a time when uncertainty surrounds the Indian economy. In the past, many of the high debtors in the list - Reliance Communications, Bhushan Steel, Essar Steel, Videocon, Lanco Infra and Jaiprakash Associates - had defaulted on loans and filed for bankruptcy. A few promoters lost their firms and some went for liquidation.

Not The Right Time

At present, it is difficult to service loans due to consecutive lockdowns. Companies that have availed the six-month moratorium offered by the Reserve Bank of India (RBI) will have to pay the principal and interest at the same time once the freeze is lifted after August. Bankers are worried since some of these companies are yet to achieve normalcy in cash flows.

For instance, steel companies are facing huge manpower shortage after migrant workers moved back to their native places. Orders from Europe and West Asia are lined up, but scaling up production is an issue. Carmakers are in the middle of deferring discretionary purchases by consumers, while real estate developers are struggling to find capital to complete ongoing projects. Incumbent players in the telecom industry - Bharti Airtel and Vodafone Idea - meanwhile will have to find investors to reduce debt and invest further to make their networks 5G-ready. 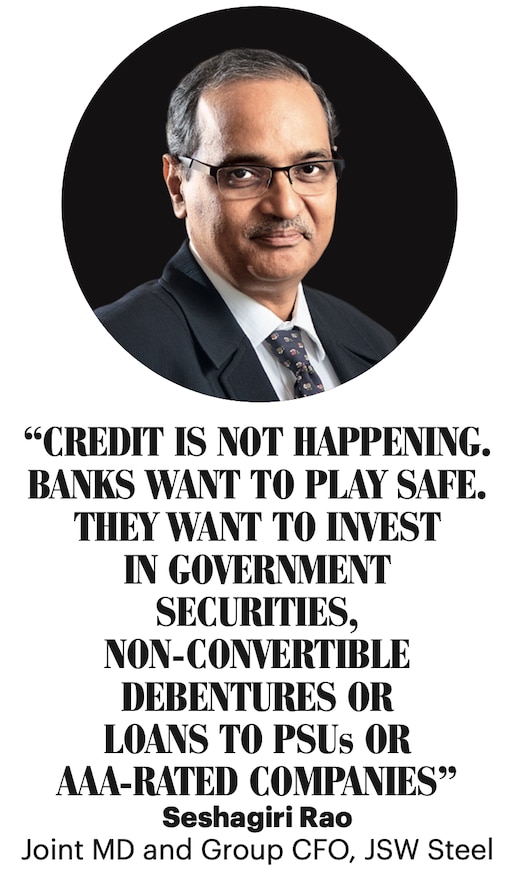 Seshagiri Rao, Joint Managing Director and Group Chief Financial Officer, JSW Steel, says while forecasting risk, companies work on different business scenarios by reducing capacity utilisation, selling prices and margins by 15-20 per cent, or increasing the cost of production at the same level. They anticipate the worst-case scenario based on these assumptions and build a liquidity buffer, while putting in place a balanced capital structure. But, according to Rao, all these assessments hold no value during the current crisis, since no company would have foreseen a zero top line for two months. The situation is not similar to managing compressed margins and deferred profitability, he adds.

Hit by the pandemic, Sajjan Jindal-led JSW Steel has slashed its capital expenditure plans for FY21 by almost 45 per cent to Rs 9,000 crore. The company had initially earmarked Rs 16,340 crore. Plans to double the capacity of its Dolvi plant in Maharashtra to 10 million tonnes (MT) have also been delayed by six months, primarily due to shortage of manpower and material. Tata Steel Europe, which was in discussion with the UK government for a Euro 500-million relief package, has restarted negotiations with Germany's Thyssenkrupp for a possible merger almost a year after the two firms called off a joint venture proposal citing the European Commission's objections. Both companies are now planning to sell off some of their assets to meet Europe's anti-competition norms. Besides, Tata Steel has also taken huge loans for building the Kalinganagar plant in Odisha, where it is raising the capacity from 3MT to 8MT. Naveen Jindal-led Jindal Steel and Power Ltd (JSPL), meanwhile, reduced its net debt by Rs 4,379 crore in FY20.

The four power majors in the list of the 20 most-indebted companies have a combined gross debt of Rs 1.63 lakh crore, with Adani Power topping the list. The current crisis has delayed the commissioning of the company's 1,600-MW ultra-supercritical, coal-based thermal power project in Jharkhand, which is being developed for the supply of 1,496 MW to the Bangladesh Power Development Board. The company has evoked the relevant clauses under the Power Purchase Agreement (PPA) with regard to Force Majeure and change in law, due to Covid-19. Adani Power and Vedanta have also announced plans to delist since they are under-valued according to their managements. Vedantas net debt stood at Rs 21,273 crore on March 2020, Rs 5,683-crore less compared to a year-ago.

Tata Power, on the other hand, is selling overseas assets to reduce the pressure on debt. It recently sold three big dry, bulk cargo carriers it owned through a Singapore-based unit for $213 million. It is also looking to raise Rs 2,000 crore through a rights issue.

Another Tata Group firm, Tata Motors, plans to terminate around 1,100 temporary jobs at its arm Jaguar Land Rover. JLR's cost-control programme, Project Charge, is targeting Euro 5 billion in savings by the end of the current fiscal. So far, it has managed to save Euro 3.5 billion. The company, whose capital expenditure has declined by 40 per cent to Euro 2.5 billion due to economic woes, is also cutting down on working capital and cost overheads in manufacturing and materials.

Infrastructure major L&T has been planning to become asset-light for a long time. Recently, CEO and MD S.N. Subrahmanyan

said the company will reduce its Rs 1.24-lakh-crore debt by Rs 30,000 crore before March 2021 by selling its entire stake in L&T Infrastructure Development Projects and Nabha Power, and transferring its stake in Hyderabad Metro to an infrastructure investment trust.

Another major player, GMR Infrastructure, in February, sold its stake in the coal-fired Kamalanga power project for Rs 5,320 crore to reduce debt. It has signed a share purchase agreement with French company Groupe ADP, which will hold 49 per cent stake in GMR Airports Ltd (GAL) for an equity consideration of Rs 10,780 crore. GMR has also cut salaries by up to 50 per cent.

Other companies have also reduced wage bills. Tata Sons has initiated 15-20 per cent pay cut for vice presidents and above across group companies. Reliance has undertaken 10-50 per cent salary cut in its oil and gas division, anticipating a reduction in cash flow.

Piramal Enterprises has made a Covid-19 provision of Rs 1,900 crore in terms of non-performing assets (NPAs). The company brought down debt by Rs 17,500 crore in FY20 and is looking to sell a minority stake in the pharmaceutical business to reduce it further.

The Reserve Bank of India (RBI) recently said that an estimated Rs 38.68 lakh crore of the total Rs 100 lakh crore worth of outstanding loans, is currently under moratorium. Of this, loans to large companies constitute around Rs 24 lakh crore. Rating agency ICRA has said that gross NPAs of banks are likely to rise to 11.3-11.6 per cent by March 2021, from 8.6 per cent in March 2020. It highlighted that uncertainty on the asset quality front remained high with almost 30-40 per cent of loan book across various banks under moratorium. Even if 10-20 per cent of these borrowers were to default, the slippage rate for banks could rise to 3-8 per cent of advances, according to the report.

Anticipating that highly leveraged companies will not be able to meet repayment schedules, RBI extended the moratorium period for three months till August 31 (from May 31 earlier). The government also suspended the Insolvency and Bankruptcy Code (IBC) for up to one year, fearing pile-up of cases at bankruptcy courts due to rising number of defaults.

In the first month of the moratorium, around 328 companies, including JSW group firms, Tata Power and Piramal Enterprises, availed the option. But the government did not announce any compensation to banks for the delayed principal and interest collections. Banks, on the other hand, wanted to charge interest on delayed interest payments. The matter is currently in the Supreme Court. On June 12, the apex court asked the finance ministry and the RBI to hold a meeting to decide on the waiver of interest on interest for deferred payments of loan installments during the moratorium period.

In the case of suspension of the IBC, the government does not have any direct financial overload. Banks will have to stay with the loan books of defaulted companies. They can, at best, restructure the loans. It means lenders will have to increase the loan tenure, forgo the unsustainable portions, and sanction additional working capital to help businesses turn around.

Niranjan Hiranandani, Founder and Managing Director of Hiranandani Group, says lack of cash flow and shortage of capital are major issues. He pointed out the necessity of one-time restructuring of corporate debt. "The Indian economy has been facing challenging times since past few years because of economic and taxation reforms. The lockdown has just brought things to a total stop," he says.

According to recent RBI data, credit to the industry has fallen by Rs 1.33 lakh crore despite the government's efforts to increase liquidity. However, deposits have increased by Rs 2.83 lakh crore. The fact is that deposits are moving from mutual funds to banks after Franklin Templeton MF closed six of its debt funds citing redemption pressures.

But where is the additional money being invested? Centre borrowed Rs 6.70 lakh crore in April and the first week of May. Of that, banks have lent Rs 3.48 lakh crore and the RBI Rs 3.22 lakh crore, says a banking expert. "Credit is not happening. Banks want to play safe. They want to invest in government securities, non-convertible debentures (NCDs) or loans to PSUs or AAA-rated companies," says Seshagiri Rao.

"The fraud in Bhushan Steel was investigated by 900 officers. All the banks were involved in the transactions. In the Nirav Modi case, several PNB officers were in the dock," says a corporate executive.

Credit flow was a problem even pre-Covid. But there were other sources of financing like mutual funds, insurance companies, foreign portfolio investors (FPIs) and non-banking financial companies (NBFCs). Commercial papers were majorly funded by MFs. "When credit flow has stopped from other sources, banks are also not lending. This logjam has to be cleared," says Rao.

Transmission of rate cut is another issue. In the last 18 months, the RBI has reduced the repo rate by 2.5 per cent. But SBI's MCLR came down only by 1.15 per cent. It means not even 50 per cent of the cut was passed on to consumers.

Ramesh Iyer, Vice Chairman and Managing Director, Mahindra & Mahindra Financial Services, says the Centre and the RBI have taken enough steps to make liquidity available to NBFCs. "But business requirements are not going to be high. Debt will be needed mainly for large disbursements. NBFCs will need more money if disbursements pick up big time," he adds.

There are structural issues in the financial system. So, strengthening the balance sheet and creating liquidity within the company are important. Five years back, a company sitting on an additional Rs 500 crore would repay banks. But, not anymore. Today, companies want to preserve cash and wait-and-watch since lending taps are drying up.