Sanjay Jalona has helped LTI grow by creating a niche, through acquisitions, and by exiting from some sectors

When Sanjay Jalona, an Infosys veteran, took over as CEO & MD of LTI in 2015 (known as Larsen and Toubro Infotech back then), he had a simple mandate—take charge of the business and create a unique place for the brand. Over the years, with the right strategy and focus, he has managed to achieve just that.

Jalona decided to focus on fewer sectors and let go of sectors the company did not have a competitive advantage in. “We can never compete with an Accenture or a TCS in banking. They will be many times... [bigger than] my company... But we can compete in some areas, verticals and niches. We have to be able to compete with everyone,” explains Jalona.

This inordinate focus has helped LTI build capabilities and turn competitive. The company has incubated some new verticals and utilities in India, the US and Europe. “This has helped us reach where we are. We have built deep digital capabilities and an enviable culture of client-centric in novation,” says Jalona, the winner in the IT & ITeS category of the BT-PwC India’s Best CEOs ranking. In addition to its rapid organic growth, LTI has developed an acquisitions-led growth strategy to expand the breadth and depth of its services. It has completed seven acquisitions under Jalona’s leadership: AugmentIQ Data Sciences, an innovative start-up offering IP-based, big data and analytics solutions; Luxembourg-based Syncordis S.A., a leading core banking implementation services provider; Ruletronics, a boutique Pega consulting firm; N+P, a Temenos consulting firm based in Germany; Lymbyc, an AI and advanced analytics focussed firm; Powerup, a fast-growing cloud consulting firm, and Cuelogic, a digital engineering and product development firm. These acquisitions have helped LTI rake in new business. “We created new classes of go-to-market strate gies for LTI. Data, cloud and digital did not exist in 2016. They account for 53 per cent of our business today,” he says. 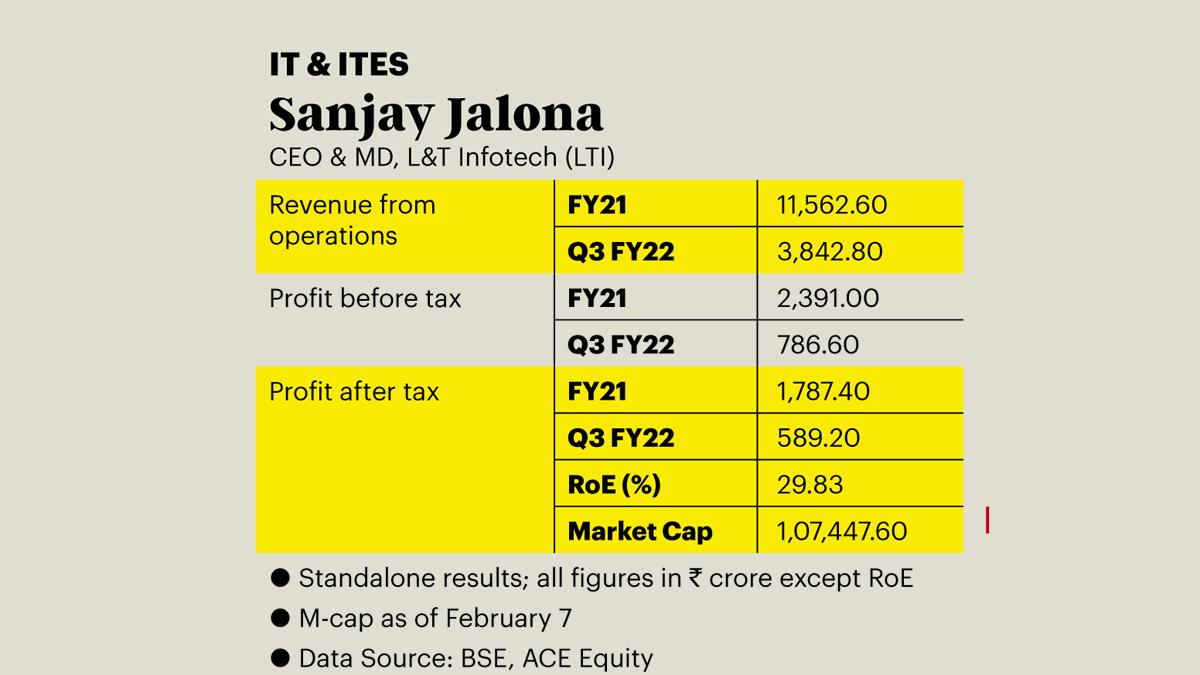 Jalona believes in innovating. He also talks about the Red Queen Effect from Alice in Wonderland—where you keep running but stay at the same place. “So, if you don’t innovate, you will fail.” The acquisitions also power up the cloud. The company is moving very quickly towards the billion-dollar aspiration on the cloud. Investing in building a talent supply chain has worked in favour of LTI. A recent report by Prabhudas Lilladher stated that in a strong demand environment constrained by availability of digitally skilled talent, LTI is focussed on building talent at scale.

It has hired significantly in the past four quarters, resulting in its total headcount increasing 31 per cent year-on-year. LTI plans to continue strong hiring. The fresher intake target has been increased twice, first from 3,000 to 4,500 and then to 5,500 in FY22. It plans to hire 4,000 people with 1-2 years’ experience and upskill them to shore up supply. Plus, LTI is also focussing on hiring non-engineering talent and skilling them. It is looking at tying up with colleges, offering a hybrid, flexible work model in terms of work from home or work from office, having satellite offices in the US, etc. Technology is an ever-changing arena. There are new technologies every few months. One has to have the curiosity and the ability to learn.

Jalona believes in the Zen Buddhist word—Shoshin—which means a beginner’s mind, and Ubuntu, which stands for humanity. LTI has been focussing on its people and on their all-round development. It hosts several continuous programmes to ensure that the talent is always ready and learning. The Shoshin School enables bespoke learning paths, drawing from global learning repositories. And LTI Belong is an organisation-wide DEI (diversity, equity and inclusion) programme. Regular training interventions take place to keep pace with the changing times and also develop an appreciation for evolving paradigms—technical as well as behavioural. Jalona has given a purpose to the organisation. The first is to have the confidence to compete with the best. Secondly, ‘small enough to care but large enough to execute’ has been the theme that has worked well for LTI. He now wants to focus on the next journey—taking leadership positions in the chosen verticals that LTI operates in. “From a challenger, we [want to] become leaders—we’ll choose battles to fight because we are still much smaller compared to larger players like Accenture or TCS,” he says. This is how LTI differentiates itself.

But this journey wasn’t easy. While differentiating itself in a crowded marketplace, Jalona had faced scepticism during its IPO in 2016. But under his leadership, LTI has continued to innovate in a fast-changing industry. The efforts have worked well. From 49 large global clients in 2016, LTI now has 72. And from just three clients valued over $50 million, it now has eight. The number of clients valued at more than $1 million, too, has more than doubled from 85 to 187. “LTI will focus on harvesting existing high-growth engines such as 53... [large] high-growth accounts, high potential sub-verticals of biotech, streaming, payments, insuretech, etc., and new growth regions of the UK, Australia, Switzerland, and the Middle-East. LTI sees strong cross-selling opportunities in these new growth areas led by cloud (ALTIUS cloud platform), data (FOSFOR data-to-decision platform), and digital capabilities,” says Aniket Pande, Research Analyst at Prabhudas Lilladher.