How V Resorts moved up from a hospitality startup

It is the story of a successful pivot, from a budget accommodation play to a more premium one where experiences hold the key.

A 'V' can stand for many things. For V Resorts, a hospitality management start-up, it could mean vacation, valley, village, vintage, vertigo, variety, voyage and, most importantly, view. The premise was simple - every room, in the properties it manages, should have a good view. So at its resort in Sattal, it is the "crystal clear sparkling green waters of the Sattal lake"; at Ramgarh, a "180 degree view of the snow-capped Himalayan range"; at Mogli Bandhavgarh, it is an "astonishing pooled view of the wild woods"; and at Fort Auwa in the Pali district of Rajasthan, it could be "ancient temples, ruins and artefacts such as the parrot firing canon".

The vision of the start-up, meanwhile, is much clearer. The fog has lifted from a tumultuous beginning in 2011, where a few missteps nearly made it fall off the cliff. This is the story of a successful pivot, from a budget accommodation play to a more premium one where experiences hold the key; from an asset-heavy model to a light one. All the 27 resorts it manages today are in off-beat locales. The company doesn't own or lease these properties; it just aggregates existing ones, works on improving them, brands, markets and operates. And it limits its scope to small resorts - the average is 15 rooms. All this is plotted with a view to differentiate and for profitability. But more of that later.

USP: Hospitality management with a focus on small resorts in off-beat locales

Co-founder Aditi Balbir is now busy ramping up her numbers. "We aim to touch 100 resorts by March 2016 and scale to 1,000 rooms from 399 currently," she says. Overall, she has signed contracts with 53 resorts thus far, that adds up to 685 rooms - many of them are being "on-boarded".

Her pivoted model is just a year old. She relaunched V Resorts in November 2014, hoping to cash in on the growing market for domestic travel, particularly leisure travel. While the sector is prone to fluctuating consumer sentiments depending on the economy, particularly inflation and interest rates, the long-term trend is clear. It is a large market: the Indian travel and tourism industry is worth between $36-40 billion and young Indians, between 25 and 40 years, will travel a lot more, going ahead, because of higher disposable incomes. Mahindra Holidays & Resorts India Limited, which also operates in the leisure hospitality segment and, in some ways, is competition to V Resorts, summarises the market well in its annual report: "At a fundamental level, there has been considerable growth in the size of this market (urban families with a capability to incur discretionary expenditure) in the last 15-20 years - both in terms of people with the ability to spend and change in lifestyle, and aspirations that have increased the willingness to take vacations for leisure. Long weekend holidays and extended family holidays are key emerging trends that reinforce this belief. Today, 'Holidays' is in the top of discretionary spending list for two out of five Indians." 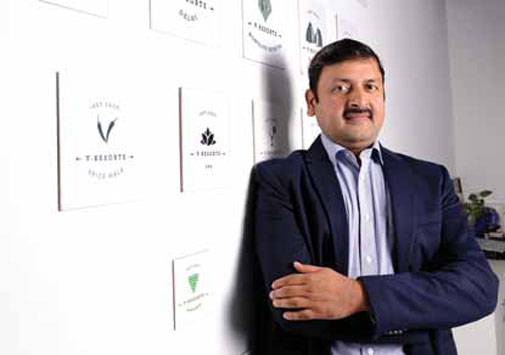 So what was the start-up's original model that did not work?

Balbir recollects, sitting in her office in Noida's Sector 16. The walls have a series of posters that urge travellers to "Go kayaking, cycling, angling, skiing, make pottery and do yoga". Balbir had no experience in hospitality when she started out in 2011. After an MBA, she worked with a venture capital firm. It was here that she hatched a plan along with her fund manager. What about aggregating summer homes onto a portal? They hired a CEO and a team. But the company started leasing properties. "The CEO had no tech experience; the website never came up," Balbir says, half smiling. The asset-heavy model, meanwhile, drained the company and Balbir had to fire the CEO and let 33 employees go. "We re-started the business from scratch," she says.

The new idea was to be a hospitality management company, but for small properties. After taking over a resort, Balbir spends around Rs 1 lakh upgrading the property. "For the owner, we provide everything - the manpower, training, linen. Everyone is on our rolls. We manage everything, right from reservations to customer feedback," she says. There is a revenue sharing agreement with the owner, not a profit sharing one. "It is variable and not fixed. If it was fixed, then it becomes like a lease and drains you. With this model, we have developed a competency of breaking even at 20 per cent," she adds. Currently, the company is striking more than 25 per cent occupancy and, on an average, her rooms cost Rs 4,500 a night. V Resorts can potentially generate revenues in the range of Rs 5-8 crore in 2015/16.

How can you make money at 25 per cent occupancy?

The resorts are in remote places where manpower costs are lower. And Balbir thinks her background is an advantage. "We are able to come up with this model because we are not from the hospitality sector," she says, before explaining the company's frugal approach. Typically, in hotels, the ratio for the number of linens per room may be 4:1. At V Resorts, it is 2:1. It is a function of the resort size. "A bigger property with too much laundry would take more turnaround time. In our model, the local dhobi can do the job quick. Also, we need less linens because the occupancies are lower," she adds.

Manpower costs are optimised too. While traditionally, the ratio of the number of rooms to staff can vary between 1:2 and 1:4 in most hotels, V Resorts manages with 1:1. Why is that? "We have developed a system where people multi-task. The guy who serves you, may also help in the kitchen. It is possible because he is a local guy," Balbir answers. Today, she employs 35 people and another 400 contractually.

While two customers Business Today spoke to appeared very happy with the service and their stay at V Resorts properties, running with such a lean engine has its pitfalls. Setu Goyal stayed with his family and friends at the company's Rajaji National Park resort in October. He wrote on travel and review site TripAdvisor: "They would do things only when told at least thrice. They are always confused on who would take your order - the kitchen or the reception. As a result, no one does." V Resorts' response highlights the problem: "The service and the food problems that you have witnessed during your stay were due to the absence of our two key resort staff - the manager and our executive chef. While our resort manager recently got diagnosed with dengue, our executive chef lost his house in the recent earthquake in Uttarakhand, so both had to leave immediately."

Wouldn't a hardcore hospitality professional have handled situations such as this better? "Finance guys think from the head. Hospitality is a heart business," says Rachna Sharma, a former General Manager with the Bangkok-based Lebua Hotels & Resorts. "It is about patience, people, soft skills and a lot of common sense."

V Resorts certainly has a long trek to cover.