News
Magazine
Corporate
On The Edge

In spite of rising prices and some relief from falling imports, the steel industry is struggling to recover.

"It was an error of judgement. People mistook 2012 for 2010 and thought the boom was here to stay"

August 7, 2014, was a black day for the Indian steel industry. That day, the Central Bureau of Investigation arrested Neeraj Singhal, the Vice Chairman of Bhushan Steel, on charges of bribing Syndicate Bank Chairman S.K. Jain for securing credit to prevent the company from defaulting on a loan. The company's stock fell more than 60 per cent over the next few weeks.

This put the spotlight on the extreme distress in the steel industry - its unmanageable high-cost debt and fall in prices due to surge in imports (in 2014 and 2015) aided by "predatory" pricing by China, which further squeezed margins/profits and hit the companies' ability to service debt. The government took a series of steps to curb imports earlier this year. This increased prices and improved profitability. But the recovery has been painfully slow. The companies are still teetering on the edge. Some may even go belly up. Are there more Bhushan Steels in the offing? It's possible, say experts.

The long gestation period - it takes at least four years to build a steel factory - and projection of ever-rising demand had lulled domestic steel companies into complacency. In the middle of 2012, they were busy expanding at a frenetic pace, using capital raised at high interest rates. The proverbial cookie started crumbling in the middle of 2014 when global steel prices slumped, triggering the first gush of cheap imports, mainly from China. The dynamics of the global steel industry were changing. The companies realised this, but belatedly.

"There was an error of judgement?.people mistook 2012 for 2010 thinking the boom is here to stay," says Ravi Uppal, Managing Director and Group CEO, Jindal Steel and Power Ltd. "Classical economists said if the GDP (gross domestic product) grows 8 per cent, the steel sector will grow an additional 2 per cent. Gullible people like us and some others took them seriously, went along with the wave, and put up fresh capacity with a four-year gestation period. Just when the capacity was coming on stream, everything that could go wrong did. Imports rose, prices crashed and market conditions became unfavourable. Interest rates were high and so was our depreciation burden as our plant was new." 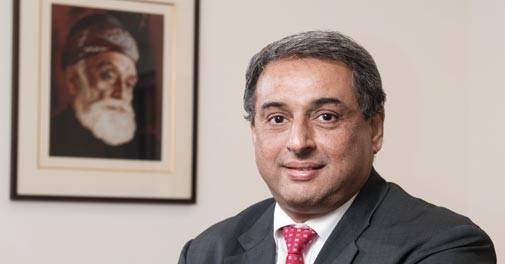 "To build another 80-100 million MT capacity, you need $80-100 billion. I don't see the financial health of the industry supporting such an investment"

The company has a capacity of 4.85 million tonnes, not the biggest, but debt of over Rs 47,000 crore. The balance sheet has been further weighed down by the thermal power portfolio. While some problems are a result of lack of vision - for instance, it did not use the opportunity of investing in iron ore mines in the 1990s - it is also partly a victim of bad luck. In August 2014, a sweeping Supreme Court ruling annulled all coal block allocations between 1993 and 2010, hitting the company's power venture.

Still, its captive coking coal mines in Africa and Australia give it an edge, especially now, when global coal prices have shot up unexpectedly. "Prices of coking coal have risen 325 per cent from $85 to $275 per tonne in the past few months. This has increased production costs by around Rs 7,000 per tonne since August 15," says Uppal. "We started our coal mines in Mozambique on October 1 and Australia in August. This gives us an edge. Till January, steel prices in India will rise by Rs 6,000 per tonne." JSPL will be a direct beneficiary.

While Bhushan's ills are well-documented, the Ruias-owned Essar Steel is in the same boat. At 36.85 per cent, its capacity utilisation in 2015/16 was the lowest in the industry. Also, the debt-to-equity ratio of 3.7 is making creditors nervous. Its operational performance, however, has taken a turn for the better. Revenues grew 12 per cent to Rs 4,482 crore in the first quarter while production rose 58 per cent to 1.85 million tonnes in the second quarter, though its 10-month search for a strategic investor did not lead to anything. It is partially insulated from rising coking coal prices as some of its units use natural gas. Gas prices have fallen from $20 per mmbtu to $6 mmbtu in the past few years. It recently won a mine in Odisha that can supply half the ore that it needs. More significantly, the group plans to plough a part of the $10.9 billion (Rs 72,800 crore) it recently got from selling the 98 per cent stake in Essar Oil to deleverage the steel company's balance sheet. 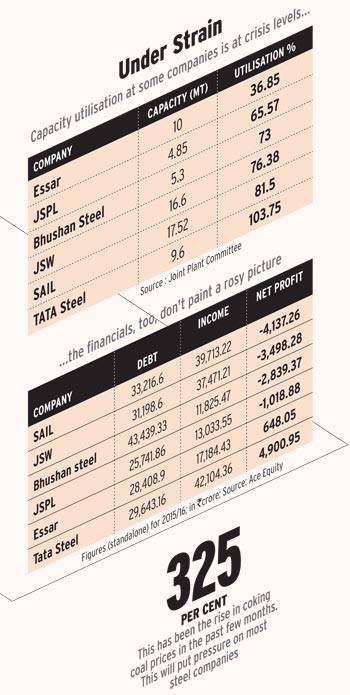 "Nearly $10 billion, which is about Rs 70,000 crore, deleveraging will take place as a result of this transaction for the group," Essar Group CEO Prashant Ruia had said after the completion of the deal last month. "The money required in Essar Steel is not much as the capital investment has been largely completed. The plants are operational and generating reasonable revenues and margins."

The big three, market leader Steel Authority of India, or SAIL, JSW Steel and Tata Steel, the oldest, have their own problems to contend with. SAIL, because it is state-run, is better positioned to weather the storm than the more aggressive private players. Further, it has a big land bank, apart from raw material linkages (an area where it, along with Tata Steel, distorts the level-playing field).

Yet, it faces big challenges. Its portfolio is skewed towards low-grade steel used in construction and real estate where margins are low. With 85,000 employees, it is flabby. Salaries and wages account for one-fourth of net sales turnover.

"Even though they have been given goodies such as mines and land for a song, all they have nurtured is inefficiencies," says an industry veteran.

A comparison of SAIL and JSW corroborates the point to an extent. Facing an onslaught of dumping from China, Korea and Japan last year, both were deep in the red in 2015/16. However, after the announcement of the minimum support price in February and the subsequent decline in imports, the private steel maker's fortunes changed. Its net profit soared almost 10 times in the first quarter of 2016/17 while revenues rose 7.6 per cent. SAIL's net loss widened from Rs 248 crore to Rs 535 crore. It was strangled by high interest/depreciation charges and decline in net sales realisation. Though SAIL spends less on raw materials than JSW, the latter produces almost the same quantum of steel with a workforce that is less than a sixth of what SAIL has.

"We have invested a large sum to modernise our units and have started getting the benefits," says SAIL Chairman P.K. Singh. "On the one side, this will improve our product profile and quality, while on the other hand, it will improve our efficiency. Manpower costs will go down. Energy consumption, too, will fall. Some areas where we still need to improve include raw material quality. We are today globally competitive. When our production is ramped up to the desired level, our manpower productivity will also improve," he says. The company is in the last leg of its Rs 72,000-crore modernisation that began in 2012. Its capacity will rise from 17.52 million tonnes per annum in 2015/16 to 21 million tonnes per annum by the end of this financial year. With a debt-to-equity ratio of just 0.85, it has already chalked out plans to invest Rs 1,50,000 crore to increase capacity to 50 million tonnes per annum by 2050. This at a time when no private steel company is thinking about further investments. 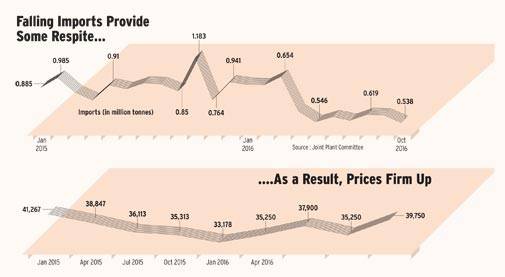 "Private sector investments will take time. The top 30-40 private companies in India in four-five capital-intensive sectors are not in a position to invest as their existing plants are not fully operational and their balance sheets require a correction," says Seshagiri Rao, Joint Managing Director and Group CFO, JSW Steel. "We cannot expect investments in the private sector in the next 12 months," he says.

"In my view, the demand should be in the 200 MT range by 2025. I am a bit more sceptical about capacity. To build another 80-100 million MT capacity, you need $80-100 billion and I don't see the financial health of the industry supporting such an investment," says Tata Steel India Managing Director T.V. Narendran.

With a standalone debt of just under Rs 30,000 crore, capacity utilisation of over 100 per cent, a high-quality product portfolio and reputation as one of the world's lowest cost steel producers, Tata Steel India is better placed than its rivals. Its finances are backed by substantial raw material linkages, some dating back to the pre-Independence era. With captive iron ore production of 23 million tonnes per annum, its entire requirement, and 3.5 million tonnes coking coal, a third of its requirement, raw materials account for just 28 per cent net sales.

"The Tatas are inefficient and pampered. They have so many mines in West Bengal, Odisha and Chhattisgarh where they went in at a time when nobody questioned the propriety of the allotments," says a top executive with a rival steel company. "Like SAIL, they have too many employees and are bureaucratic. They need to re-model their operations. They are trying but it will take time. It is like turning a ship on its axis."

Shape Up or Ship Out

The ability of these companies to change will be fully tested in the next decade or so. With the new Mining Act that came into force last year doing away with arbitrary allocation of mineral resources in favour of auctions, Tata Steel and SAIL will lose their captive mines by 2030. They will have to participate in the auctions and pay market rates, or sometimes even more, for the mines. It may not be easy.

"We have to be more efficient. The intention should be to make more profit," says Singh of SAIL. "We should become a commercial organisation. Except for a few mines, we do not have any other advantage and are in direct competition with the private sector in every way. When the mines are also taken, our working should become purely commercial."

"While the Act has brought transparency and we welcome that, we have, as a country, negated some of our advantages such as large quantities of good iron ore," says Narendran. "The government is collecting revenues upfront. Our tax liabilities are one of the highest in the world. Despite this, we are one of the lowest cost steel producers in the world and one of the most cost-effective iron ore mining companies in the world. We have taken a number of initiatives to ensure that we continue to be one of the most profitable steel businesses even if we assume that we will get iron ore at market prices after 2030."

In many ways, the scramble for resources has already begun. Having learnt its lessons the hard way when, in 2011, a mining ban in Karnataka nearly crippled its factory, JSW has become active in mineral auctions. It has bagged five of the seven mines that have been auctioned in the state of late. "We were aggressive and paid 100 per cent market price for (some of) the mines as we did not want to face uncertainty," says Rao. "We will get raw security material. The auction route is welcome from the industrys point of view," he says.

In this era of diminishing returns, only the fittest will survive.