The ugly spat between McDonalds and Vikram Bakshi, its estranged partner, is taking a toll on the brands fortunes in India with competition fast catching up. It's a balmy afternoon in Delhi and Vikram Bakshi, the 61-year-old former Managing Director of Connaught Plaza Restaurants Ltd (CPRL) - the joint venture (JV) company that manages US fast food major McDonald's operations in North and East India - is studying property sale deed documents in his corner office in New Delhi's Jor Bagh. Bakshi, an old hand in the real estate business, knows this is not the best time to sell property. Yet, he has been selling a number of them, mostly in the Connaught Place area, for the past two years. He says it is okay to sacrifice a bit for a bigger goal. He is creating a war chest for the battle he has been fighting with McDonald's since August 2013 when he was ousted as the CPRL managing director. He owns 50 per cent in the JV that dates back to 1995.

The fight is a strain on Bakshi, but the real brunt has been borne by CPRL - its expansion has almost ground to a halt, financials are under strain, and it is losing market share (it is no longer the fast food industry leader; Dominos has raced far ahead while KFC is closing the gap fast).

What is worse is that a settlement is unlikely. On July 21, the Delhi High Court set aside its earlier order staying the arbitration proceedings initiated by McDonald's. Bakshi says he will challenge the ruling in the Supreme Court and insists the dispute be settled in Indian courts. Ronald McDonald, the clown that sits on the bench outside the firm's outlets, isnt smiling any more.

The battle lines were drawn at a meeting of the CPRL board in August 2013. Bakshi says he had no clue about what was in the offing. The previous evening, he was dining with Robert Larson, the relationship partner for McDonald's India, raising a toast to CPRL's success. The company had opened a record 27 outlets the previous year and had plans to open another 35 in 2013. The only thing on their mind was expansion. At the end of 2012, the JV agreement was amended so that the partners, Bakshi and McDonald's, could pool in more equity, Rs 6.5 crore each, and raise debt for expansion. Bakshi was unaware that his days as managing director were numbered. "It was an absolute shocker .... hit me like a bolt from the blue," he says. "Just the previous night, I was at a dinner with Larson toasting our success. In June, we had opened the Great India Place (Noida) outlet, our largest till date. Everybody was happy. We were expanding and were profitable. There was no hint of what was coming," he says.

The situation deteriorated swiftly after this. Stung at not being re-elected the managing director for the 10th time - the election took place every alternate year - Bakshi dragged McDonald's to the Company Law Board (CLB) seeking reinstatement. The CLB ordered status quo on equity, removing any possibility of change in shareholding or either partner taking full control. McDonald's terminated the JV agreement and moved the London Court of International Arbitration.

A battle over valuation followed. In early 2014, Bakshi offered to buy McDonald's stake at a net asset value of Rs 150 crore. The US company made a Rs 48-50 crore offer for Bakshi's stake. The latter insisted on fair market value and offered to sell initially for Rs 2,500 crore and later for Rs 1,800 crore. McDonald's did not respond. As this went on, the Delhi High Court stayed the arbitration proceedings in December 2014. Once on best terms - with Bakshi being the face of McDonald's in India - the gulf between the two partners is wider than ever. "We have lost confidence in our former partner (for reasons set out in our legal case) and are working to end the relationship according to the terms of our JV agreement," says Liam Jeory, Vice President, Corporate Relations, McDonald's Asia-Pacific Middle East Africa. "Now that the Delhi High Court Division Bench has ruled in our favour and overturned the stay, we are taking steps to continue the arbitration proceedings. While this legal action is taking place, we have no further comments to make."

The main cause of mistrust was Bakshi's real estate business. McDonald's alleged he had leased out property to a rival company. He was also accused of financial discrepancies/bungling in CPRL. Among the allegations the US firm levelled was that Bakshi had pledged 51,300 of his CPRL shares to get a Rs 20 crore loan for development of Savoy Outlet Mall and service apartments in Manesar by his company, Ascot Estate (Manesar) Pvt Ltd. McDonald's said he did not take approval from the company before pledging the shares. It also pointed at a 2007 transfer of Rs 7 lakh from the company's account to his group company, Vikram Bakshi and Company Pvt Ltd. It also "highlighted glaring inadequacies with respect to internal control systems", Bakshi's focus on his other businesses and directorship of 25 other companies - it said he was not devoting enough time to CPRL.

"Leasing out property to a rival may not be a breach of contract but it was a definite breach of trust," says a former CPRL employee, requesting anonymity. "Charges of financial bungling were tough to prove, and at least in the Regal building outlet case, Bakshi did pay back the money with interest. But it was enough to cause discomfort in the US. Basically, they could not rely on him anymore." The Regal building case relates to the Rs 7 crore that CPRL lent to a Bakshi-owned company for a space it had rented in New Delhi's Connaught Place.

Bakshi refutes the allegations and says the board, which had representatives from McDonald's too, was aware of all the actions. "McDonald's has used everything to project me as the culprit. It had full knowledge of what was happening. It makes it look as if I did something entirely on my own. How can I, when all the agreements are signed with the approval of the board?" says Bakshi. "In their own brand health evaluation, in the Asia-Pacific region, McDonald's Delhi came in third after Australia and New Zealand, in 2010. Their Mumbai JV with Amit Jatia (which takes care of western and southern markets) was 16th. They could get nothing credible against me and so raked up a 2007 issue that had been resolved," he says. 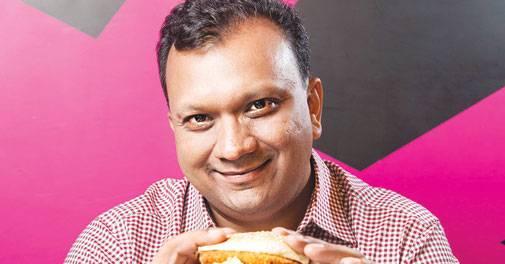 "As a master franchisee for Mc-Donald's, we continue to grow. We opened 30 restaurants last year. We now have a presence across 30 cities in our market"

The first cracks in the JV had, of course, appeared much earlier when, in 2008, McDonald's offered to buy Bakshi's stake for $5 million and later for $7 million. Bakshi waved Grant Thornton's report that pegged CPRL's enterprise value at $331 million and demanded upwards of $100 million. The success of the company between 2008 and 2012, when it grew manifold and turned profitable, was not enough to fill these cracks.

On a hot day in June 2016, the temperature touching 42 degrees in Jaipur, Chief Medical and Health Officer Narottam Sharma and his team were on a routine inspection of restaurants. They were checking the quality of ice cream served in the various outlets. What they stumbled upon took them by surprise. At the McDonald's outlet in the posh Raj Mandir area, Sharma saw something unusual in the oil being used to cook items such as aloo tikki and french fries. "The palmolein oil had been reused so much that it had turned completely black," he says. Visits to two other outlets revealed this was not an aberration. The team destroyed around 120 litres oil that day and sent samples to the laboratory. "Palmolein oil is less healthy than other edible oils. Repeated use and heating can cause a host of health problems. From a global fast food chain like McDonald's, it was quite a shock," he says. The incident shows the disarray in CPRL - expansion has stalled, quality control has gone for a toss, and profitability has nosedived. Between 2009 and 2013, it registered a cash profit of Rs 110 crore. In 2014/15, it had a cash loss of Rs 41 crore. After opening 27 outlets in 2012, it opened only 14 in 2013 as against the target of 35. The numbers were nine in 2014 and three in 2015. This year, it has opened just one outlet, in Ajmer, and this too was under construction for three years. The time taken to start an outlet has gone up from four months in 2012 to 12 months in 2014 and 16 months in 2015. Bakshi says since he is no longer the managing director, he will not comment on the Jaipur incident, but agrees that quality, service and cleanliness at the outlets have worsened.

The US firm, however, says the incident was a result of misunderstanding. "Subject matter experts have met the FSSAI and demonstrated how the initial misunderstanding of our cooking oil processes led to the incorrect diagnosis and subsequent headlines,"says Jeory. "We are working with the authorities on development of consistent oil standards for the wider food industry," he says. The US firm says any doubts about the company's regard for the Indian market would be misplaced. "McDonald's is very much committed to India," says Jeory. "We are going through this difficult and lengthy process because we believe in its potential," he says.

Bakshi has a different view. "Now what you see in North and East is a pale version of what it used to be," he says. "This fight has turned it into a loss-making company. All I ask for is fair value for my stake. It hurts like hell. But why is it not hurting the owners of the brand?" he says.

The stagnation has cost the company dearly. From being the market leader in the fast food segment till 2012, it lost the crown to Dominos in 2013, the year the spat with Bakshi began. "McDonald's remains the market leader in the burger segment by far but the fact is that the industry is evolving rapidly," says Saloni Nangia, President, Technopak. "There is a lot of innovation and fusion happening in the industry. Many new players are entering the market, bringing novelty. While the company is growing well in western and southern regions and innovating - the introduction of McCafe is a case in point - there has been hardly any expansion in northern and eastern parts. This is dragging them down."

"As a master franchisee for McDonald's, we continue to grow. We opened 30 restaurants last year. We now have a presence across 30 cities in our market," says Jatia, Vice Chairman, Westlife Development Ltd.

Neither Bakshi nor McDonald's are in the mood to relent. The stage is set for a long litigation. As Ronald McDonald would say, only the lawyers and competitors are lovin' it.