After being a brand of the masses, Titan is now trying to be a premium lifestyle brand. Its an uphill task. Titan has been the timekeeper of the Indian middle-class for decades. But with international brands flooding the market over the years, competition has spurred the Rs 10,955-crore company to diversify.

"Any category we enter, we should pioneer, excel and be world-class, offer a value proposition to consumers, which is so different," says Bhaskar Bhat, Managing Director of Titan Company. The principle, Bhat says, extends to any product that the company brings out. Its jewellery brand, Tanishq, has over the years proved it.

The latest entrant is the new range of fine French perfume called Skinn. A 50-ml bottle costs Rs 999, half the price of any international premium perfume brand. In a market where the choice is only between low-quality unbranded stuff and expensive foreign brands, there seems to be a space for such a product. Though Skinn is made and packaged in France, the company had flown in perfumers from Paris to help them know the kind of aroma that Indians prefer. "We took perfumers who had made brands such as Chanel not just to Indian flower markets but also to restaurants and food streets," says H.G. Raghunath, CEO of watches and accessories at Titan. "Our aim was to give a great product at good value."

From watches and jewellery to fragrances, the company has always tapped unorganised sectors and turned it around to build successful businesses. At present, Titan is evaluating at least 50 business opportunities in the women's, kids and youth's lifestyle categories. The aim is to increase revenue by 2.5 times in the next five years by becoming a premium lifestyle company. Today, nearly 10 per cent of its total revenue comes from premium watch brands such as Zoya, Xylys and Nebula. Titan now wants to scale it to 20 per cent in next five years. "We will enter more lifestyle categories. We already have bags, belts, wallets, perfumes and helmets," says Bhat.

Titan's aspiration can be gauged from its internal accelerator programme 'Igniter'. Any employee can submit a business idea. Around 20 such ideas are shortlisted every quarter and the employees are asked to make a presentation. Finally three or four ideas are finalised and they are asked to work on these businesses. "A lot of upcoming new businesses are an outcome of Igniter," says Raj Narayanan, Chief HR Officer. The company's eyewear business launched in 2006, Titan Eye+, was the byproduct of a similar programme called 'Future Shock'.

Bhat, 59, says the urge to explore new businesses has been there in the company since its inception. In 1984, when it entered the watch market, Hindustan Machine Tools (HMT), the sole player, was making 3.5 million watches a year. Riding on a robust distribution network and value brands such as Sonata, not just did Titan overtake HMT, but it also scaled up the image of a wristwatch from a gadget of utility to a fashion accessory. Today, Titan controls 45 per cent of the Rs 5,300-crore Indian watch market and sells 16 million pieces a year. Tanishq too is a nearly Rs 9,000-crore brand with over 80 per cent market share of branded jewellery industry.

"Our expansion has always been opportunity led. Take for instance Raga, the women's watch segment. I think we got it right when we decided it shouldn't be brand Titan. It is still part of Titan but Raga is the name and it is so uniquely positioned that it cannot have a Swiss or a Chinese competitor," says Bhat.

Since the annual results for 2013/14 came out in May, the company's shares have surged by more than 40 per cent. Industry watchers say Bhat's promise to more than double its revenue in the next five years along with the upbeat mood in the economy led to the bull run in company's stocks.

But its revenue and profit growth has been modest. In the April-June quarter of 2014/15, profit grew less than one per cent while net sales fell to Rs 2,853 crore from Rs 3,087 crore in the corresponding quarter last year. For the full fiscal year 2013/14, revenue increased only 7.34 per cent to Rs 10,955 crore from Rs 10,206 crore in 2012/13. Net profit rose 2.2 per cent to Rs 741.14 crore. Its watch business grew by just 6.9 per cent but the worst hit was Tanishq, which grew only by 6.5 per cent. The jewellery business was hit due to a shortage in gold supply triggered by the government and the Reserve Bank of India move to increase customs duty and cap gold imports.

But the moot question is whether Titan can become a premium lifestyle brand. The shift from the mass brand is not easy. For long, the company's forte was in the Rs 500 to Rs 2,500 price points. But now mobile phones are fast replacing watches in this mass segment. So now the focus is on watches that cost upwards of Rs 5,000. This year close to 40 per cent of its watch revenue came from this price band. Meanwhile, the company has experienced 25 per cent growth in the price range of Rs 10,000-Rs 25,000. But in this range Titan doesn't have many options.

"Titan has put in efforts in design and showcasing. You will see a lot of rejuvenation in the brand," says Bhat. It has enhanced its premium offerings with brands such as Octane and Automatics that come in the Rs 11,000 to Rs 16,000 price range. Titan has also acquired the 18th century Swiss brand Favre Leuba as part of its plan to launch its luxury offering in the range of Rs 75,000 to Rs 1 lakh. At its manufacturing plant in Hosur, Tamil Nadu, Titan has formed a team trained to make high-end handcrafted mechanical watches. 'To make Skinn, we flew in perfumers from paris to help them know the kind of aroma Indians prefer,' says H.G. RAGHUNATH, CEO, Watches and Accessories, Titan.
Brand Perception

But consumer perception could impede its brand aspirations. Rahul Varma, 25, who works in an insurance company in Mumbai, recently bought a Seiko watch from Helios, Titan's multi-brand retail initiative. Asked why he didn't go for a Nebula or Titan Edge, he said, "Why would I buy a Titan when I am prepared to pay Rs 40,000 for a watch?" So will he buy Skinn when he has an option to buy Hugo Boss? "Skinn is a good option for gifting. But I don't think I will buy it for myself if I can afford a Hugo Boss," he says.

Raghu Vishwanath, Managing Director of Vertebrand, a brand valuation company, says an image makeover is not going to be easy. A former Titan employee, he says the company has never been able to come out of its decision in the 90s to chase volume-based growth. "It may have been a great business move but it has diluted the brand equity," he says.

When Titan was launched by the Tatas , its Oxford-educated Chairman and Managing Director Xerxes Sapur Desai had positioned it as a fashion accessory. The watches were a contrast to the clunky ones of HMT. Desai went on to launch five sub-brands - Exacta, Classique, Spectra, Royale and Fastrack. The ad too exuded a premium, classy feel with Mozart's 25th Symphony as the background score. In less than a decade, Titan's revenue touched Rs 700 crore. But in the mid 1990s, when it stepped into the jewellery business, its profits took a hit, forcing the company to chase growth through higher volume sales. The idea gave birth to the mass brand - Sonata. The cash registers were ringing again. "Since it had no competition, it did not think differently and remained focused on volumes," says Gopalratnam Kannan, an ex-Titan employee who went to head Swatch India.

In the long run, Titan failed to cope with international competition in the premium segment."It has lost out as brands like Swatch and Seiko came with a portfolio of products. Now Titan has to build its products from scratch," says Bijou Kurien, Board member at private-equity firm L Capital Asia and a former COO of Titan. Experts says Titan's challenge is similar to that of Bata, the footwear retail company. Bata has been trying to be a premium brand by selling HushPuppies and Naturaliser but is still seen as 'mass school shoe retailer'. Abneesh Roy, head of Institutional Equities Research, Edelweiss, says the Titan brand of watches took the hit when jewellery emerged as a cash cow. "More than 80 per cent of its profits came from Tanishq. It didn't advertise its watches much," he says.

Bhat agrees that the brand has lost its aspirational value. "We started losing counter space in the large format department stores. We realised that category wars were being fought at these stores at least in the mid-premium, premium and luxury segments. We took feedback and have worked on it," he says. 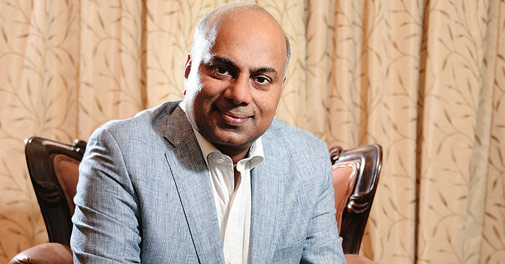 'It has lost out as brands like Swatch and Seiko came with their products. Now Titan has to build its products from scratch,' says BIJOU KURIEN, Board member, L Capital Asia.
For Bhat, the challenge is to grow without giving up the market share. "We sell 16 million watches a year. No other watch brand even sells one million watches except Timex. Most international brands sell less than 200,000 to 300,000 watches. But they are very visible. So, people like you and me see various other international premium brands. But if you go to the next town, nobody knows about these global brands," he says. Bhat admits it's tough to retain market share in the long run. "People are not brand loyal. One generally picks up from a cluster of brands," he says.

For now, diversification seems to be the way ahead. "We could have done helmets 20 years ago but this population of two-wheelers wasn't there. We could have entered perfumes earlier but it's still an open category. In sunglasses, there is no [local] brand and foreign brands are expensive," he says.

Kurien says the effort to scale up unorganised sectors like helmets will be much more than the outcome. "They need big ideas that will give Rs 2,000 crore to Rs 4,000 crore top line. I doubt if fragrances or helmets would deliver those numbers," he says.

Bhat thinks otherwise. "If you take the two-wheeler population in India and the number of accidents, there is a need for helmets. The problem is the product is not available. For a smart, lightweight, high-quality helmet, why wouldn't people pay Rs 2,000?" he asks.

Will Titan eventually be a premium lifestyle conglomerate? Kannan of Swatch India says it will take time and the company has to face its inherent challenges. "But then the company's stakeholder, the Tatas, are not new to premium market. They have brands like Taj Hotels, the byword of luxury," he says.