Death without a will could leave successors in a quandary. Here is a quick primer to understand how things work in a no-will situation

All our lives we work hard and accumulate assets in the fond hope that these could be passed on to our loved ones when we pass away. But very few of us write wills or fill in nomination forms to ensure hassle-free asset transfers. According to WillJini.com, a succession services provider, not even 2 per cent people in India make their wills. "Due to lack of awareness or a traditional mindset [no one likes to be reminded of death and demise], most people never do that essential paperwork. Only a few high-net-worth individuals (HNIs) make wills as these hold large business interests for all concerned. Again, individuals with difficult family members consider writing a will," says Director Jatin S. Popat.

And the upshot? The horror stories are too many. The process of claiming assets can be tedious and expensive in the absence of a will or nomination; there can be infighting among siblings/relatives; there can be huge tax burdens; worse still, all your hard-earned assets may end up in the wrong hands. Writing a will now and keeping it updated may save all that. But in case one is already mired in such a tangle, here is a look at the current procedures so that any issue can be quickly resolved.

Who Inherits When There's No Will

If a person dies without making a will, he/she dies intestate, and the assets will be distributed among the members of the family as per the succession law applicable.

In case a Hindu, Sikh, Jain or Buddhist dies intestate, his/her assets are distributed among the heirs as per the Hindu Succession Act, 1956. In case of a Hindu male, his assets go to Class I and Class II heirs (see table Who's Who in Succession Game). Under normal circumstances, assets will be equally divided among the wife, children and mother of the deceased. If Class I heirs are not there, the assets will go to Class II heirs, including father, son's daughter's son, son's daughter's daughter, brother and sister, among others.

"If a Hindu female dies intestate, her assets are equally divided - first, among the sons and daughters (including the children of any pre-deceased son or daughter) and the husband; second, among the heirs of the husband; third, between mother and father; fourth, among father's heirs, and finally, among mother's heirs," says Gautami Gavankar, Executive Director, Kotak Mahindra Trusteeship Services.

The law will not differentiate between the children when it comes to assets distribution. For instance, it cannot be ensured that a particular fixed deposit would go to the elder daughter's education or a sports car would be handed over to the younger son who is a petrolhead. In the absence of a will, the assets will be either divided or distributed among children. In case division is not possible (as in the case of the car), the asset will be sold, and the proceeds will be equally distributed. 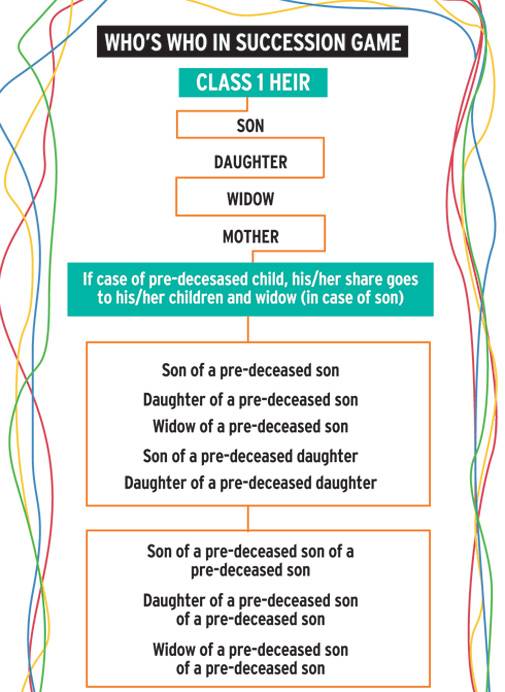 "If the deceased is a Muslim, the succession would be governed by Muslim Personal Law, depending on the specific sect of Islam to which the deceased person belonged," says Divi Dutta, Partner at the law firm Shardul Amarchand Mangaldas & Co.

"In Islam, a person is allowed to make a will for only one-third of his assets and the rest two-third is compulsorily distributed among the legal heirs as per Sharia laws, applicable to the deceased as per his caste - Bohri, Memon, Shia or Sunni," adds Popat of WillJini.

If the deceased is a Parsi, Jew or Christian, specific sections of the Indian Succession Act, 1925, will apply.

For inter-religious marriages registered under the Special Marriage Act (it allows interfaith, inter-caste and community marriages), the Indian Succession Act will apply. "The marriage has to be registered under the Act, or the parties have to be converted so that relevant personal laws are applicable," explains Mugdha Sahal, Head of Wealth Planning, Sanctum Wealth.

How To Find Those Assets

Now that we understand how assets get distributed under succession laws, here comes the most crucial step - asset consolidation. You cannot claim an asset/investment unless you know it exists. But in the absence of a will, it is quite difficult to track the assets of the deceased. One way of doing it is to look at the person's income-tax returns receipt or Form 16, which contains details of all declared assets. The catch: Not all assets are declared to tax authorities and tracking those could be difficult. 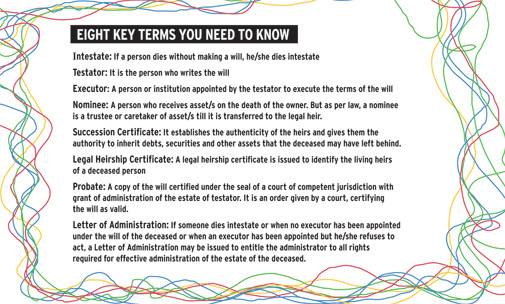 What happens to immovable assets: In case of any immovable asset such as a house or farmland, ownership will be transferred to the legal heir, and the ownership title will be changed accordingly. But when there is no will, one has to provide substantial proof of legal heirship, and for that, it is recommended to obtain a legal heirship or succession certificate. Also, a person can make a will for acquired properties. In case of ancestral property, the law of succession will apply.

As it is easier and faster to obtain a legal heirship certificate, families typically opt for the same in the first place. If the relevant authority does not approve it for some reason, one must apply for a succession certificate. Next, the legal heirs will have to approach a competent registrar of assurances with the succession certificate and a copy of the death certificate of the deceased. Mutation of the property is also required for the change in ownership in land revenue records.

"To meet the cost incurred to obtain a succession certificate, the court typically levies a fixed percentage of the estate value as its fee. The fee is to be paid via judicial stamp papers worth the said amount," says Dutta. "You need not pay any stamp duty for transfer of property, but a nominal registration fee may have to be paid," she adds. 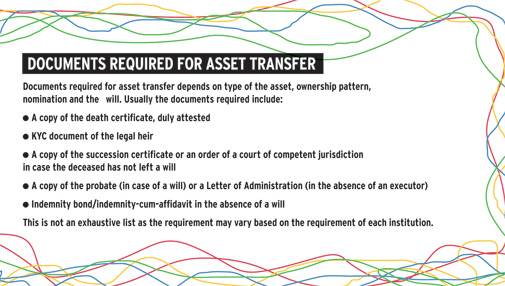 "If the deceased leaves a will and the beneficiary of the property is someone else (other than the legal heir), the lender approaches that beneficiary to protect its interests. In case there is a co-borrower, the responsibility of repayment lies with the surviving co-borrower," says Mugdha Sahal, Head, Wealth Planning at Sanctum Wealth Management.

"To transfer the property as well as the mortgage to the legal heir, a no-objection certificate (NOC) from the lender will also be required," says Gautami Gavankar, Executive Director, Kotak Mahindra Trusteeship Services.

In case the deceased had opted for a loan repayment insurance, the home loan will be paid by the insurer post which you will have to collect a loan clearance certificate from the lender as well as original property documents.

When opting for bank deposits, stocks or mutual fund investments, one is asked to make nominations. If it had been done at the time, the assets would be transferred to the nominee. But remember that a nominee is only a custodian of the assets. "Being the nominee does not give a person any right to the assets. A nominee simply acts like a trustee who takes cares of the assets till the actual legal heir is established and then has to transfer the assets to the legal heir," says Gautami Gavankar, Executive Director at Kotak Mahindra Trusteeship Services. It is always advisable to mark the legal heir as the nominee to avoid any inconvenience.

Bank deposits: According to Reserve Bank of India (RBI) guidelines, banks can transfer deposits up to a certain limit to the legal heir/s without any succession certificate. However, a letter of indemnity has to be signed by the legal heir/s who will be held responsible for payment in case other authentic claimants turn up. The RBI allows banks to decide the minimum threshold. If a bank suspects any fraud, it can ask for documents such as succession certificate. Banks have to settle such claims within 15 days of receipt of claim or submission of proof of death of the deposit holder. 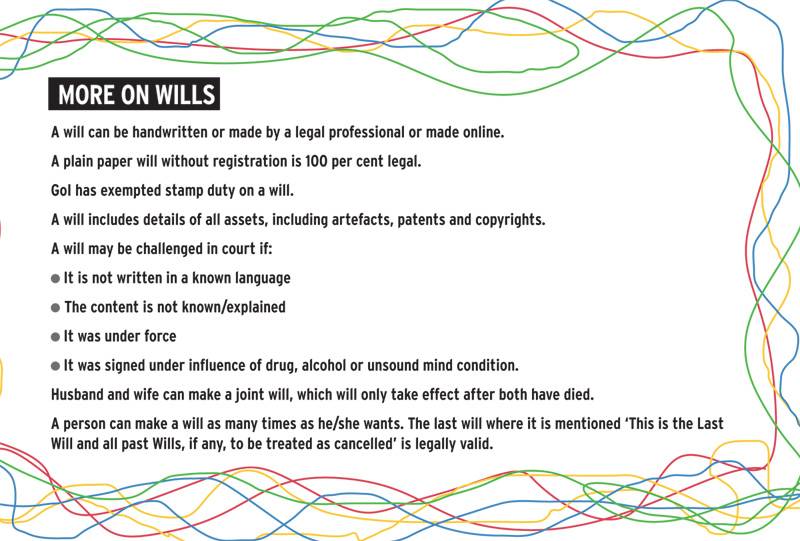 Mutual funds and stocks: If the amount is less than a certain limit (usually Rs 5 lakh), the asset management company or AMC will process the transmission of mutual fund units after obtaining necessary documents such as a letter requesting the transmission, duly attested death certificate, KYC documents of the legal heir and a cancelled cheque attested by the branch manager. In case there is no nominee, two additional documents - an indemnity bond signed by all legal heirs and individual affidavits (stating they are legal heirs) - will have to be submitted. If the money surpasses the hurdle limit and there is no nomination, the AMC may ask for the succession certificate issued by a competent court.

As for transmission of shares, one has to send the request to the depository participants. A succession certificate is required if the nomination is not mentioned and the value is more than Rs 5 lakh for shares held in demat. For shares held in physical form, the limit is Rs 2 lakh. Other documents required are same as in the case of mutual funds.

If there is no nominee registered, the claim procedure could be stretched. According to Lalitha Bhatia, Chief Operating Officer, IDBI Federal Life Insurance, "In the absence of a nominee or a beneficiary, the policy money will be payable to the legal representative of the life assured."

If a person dies intestate and there is a dispute between the legal heirs, the legal heirs will have to approach a competent court, having the jurisdiction to settle the dispute. Again, if a beneficiary relinquishes his/her right to a property in favour of another legal heir, banks, debtors, companies or other authorities may insist on an NOC from other legal heirs. Overall, tracking the assets and getting them transferred to the legal heir/s would never be an easy task in the absence of a will. Therefore, writing one and having the nominations in place can pave the path for a smooth, hassle-free asset transfer.