With stock markets at all time-highs, we tell you how to position yourself to gain from future trends.

In April 2017, the BSE Sensex crossed the psychological mark of 30,000. This was not the first time it had touched this level. The last time it had crossed this mark was in March 2015. But after that, it started trending down, and has taken two years to come back to that level again. The Nifty, too, is at the same level in terms of valuation (based on one-year forward estimates) as it was in March 2015. When the Nifty had scaled 9,000 in March 2015, the 12-month forward price to earnings, or P/E, multiple was 17.4. Today, the 12-month forward P/E is about 18. However, market experts say that although we are at the same juncture again, things are different this time. The markets, they say, are likely to keep going up from here for a much longer period, though not in a straight line.

Pankaj Pandey, Head of Research at ICICI Direct, says although the current Sensex level looks high given the flat corporate earnings growth over the last three to four years, we must note that markets discount future earnings and growth. "Given the low base and revival of consumption-led demand, we expect strong double-digit earnings recovery over 2017/18 to 2018/19 and so higher index levels," he says.

Harsha Upadhyaya, CIO, Equity, Kotak Mutual Fund, concurs with the view. He says the market is in a 'fair value-plus' zone but is not expensive. "Although indices are trading at or close to all-time highs, the valuations are nowhere close to the historic highs seen in, say, 2008 or 2000," he says.

What we are seeing is nothing like the year gone by -- when volatility and uncertainty ruled the roost. If one were to consider the opening and closing points, the markets were largely flat in 2016. However, in between, they were on a roller-coaster ride. The Sensex rose 12 per cent from January to September, before falling back to the early January levels in October-December. The triggers for such volatility included Brexit (exit of Britain from the EU), US elections, the fate of the GST Bill, monetary policy, and the biggest event of all -- demonetisation, which disrupted businesses across sectors and sizes, leading to earnings downgrades. However, 2017/18 could turn out to be different. The biggest reason is that India's economy is recovering from demonetisation faster than expected. The markets, too, appear to have taken global developments such as protectionist US policies in their stride.

"The impact on corporate earnings was nominal, with the third quarter seeing 6 per cent growth in earnings amid improved margins and trade data," says Dinesh Rohira, Founder and CEO of 5nance. This was reflected in expansion of the manufacturing purchasing managers' index (to 52.5) in April. The Index of Industrial Production rose 2.7 per cent in January after a -0.1% contraction in December 2016. Both car sales and retail finance grew 12 per cent in March. However, the factory output fell by 1.2% in February.

"One must understand that India's economy is on a strong footing with robust macroeconomic fundamentals, low inflation/interest rates, major reforms such as GST and favourable demography, which will support sustainable growth," says Pandey, adding that factors such as shift towards digitisation and increased focus on financial savings will also keep financial markets buoyant for the next three-five years. Pandey has pegged the 2017 Sensex target at 30,800.

Rohira of 5nance has a similar view. He says the market has a huge upside potential with respect to price as well as valuation. He expects the Sensex to breach 30,000 levels in the next few months. "From a longer point of view, the Sensex is expected to cross 34,000, posting approximately 14-15 per cent growth, in the next one year. The trend is expected to continue for another three years given the current outlook," he adds.

Sunil Sharma, Chief Investment Officer, Sanctum Wealth Management, says, "Earnings should grow 12-14 per cent for index companies in 2017/18 and 2018/19. We will look for a 10 per cent upside from these levels. Far more important in determining portfolio returns, however, will be stock selection, as we expect to see a wide variation in earnings and returns of individual companies."

Having said that, there are certain factors that will decide the market's fate from here on. We discuss a few of these factors.

Earnings expansion: Earnings growth will be the key from here on. Although corporate earnings growth is still patchy and strong only in a few segments, we can expect some improvement over the next few years. "With enabling factors such as decent consumption growth and, most importantly, a low base, earnings could witness recovery in 2017/18 and drive market momentum," he adds. The earnings for 2017/18 and 2018/19 are expected to be better than in the 2014/15 to 2016/17 period (See Driven By Earnings). Upadhyaya expects domestic-focused businesses to deliver better earnings growth as compared to exporters.

Liquidity: In the short run, there could be a liquidity-driven rally, led by both domestic and foreign institutions. The relative attractiveness of equities compared with other asset classes will continue to drive returns. Furthermore, due to demonetisation, banks are flushed with liquidity. This, and just 5 per cent growth in credit take-off in 2016/17, means lending rates are expected to remain low, a trend that will help companies. Besides, domestic mutual funds are seeing record inflows, a big chunk of which is finding its way into stock markets. For instance, in 2016/17, investors poured Rs 44,000 crore into systematic investment plans. Equity funds have received a net inflow of a little over Rs 2 lakh crore since May 2014. All this will keep stock markets afloat.

Macroeconomic factors: Stock markets are driven by investor sentiment and fundamentals. "The world has recognised India as an investment hub. This, along with positive cues on GDP growth, projected at 7.2 per cent in 2017/18 by the World Bank, means no one can question the strong fundamentals of India's economy," says Rohira. Further, reforms such as GST will allow companies to increase top lines and bottom lines. As per estimates, the country's gross domestic product could rise 2 per cent after the GST is implemented. 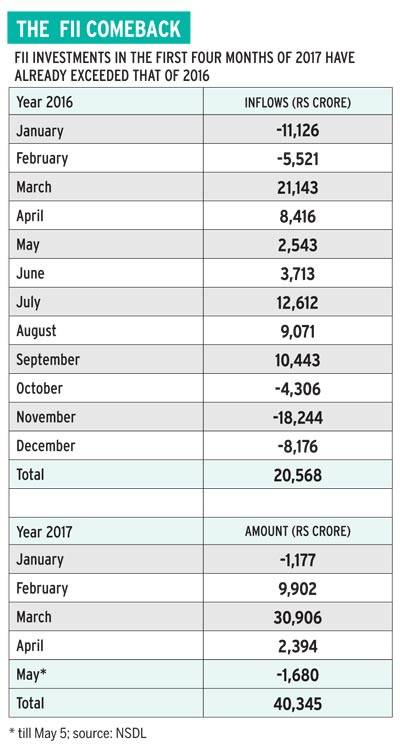 FII inflows: In the first four months of the year, foreign institutional investors, or FIIs, have invested double the amount they had put in the entire 2016 (see FII Inflows). In fact, FIIs invested a record Rs 30,000 crore in March 2017 alone. India's stock markets have become a hotspot for foreign investors due to economic reforms and sound fundamentals. FIIs own a big chunk of equity markets and their bullishness is a good signal of where stock indices are headed. "Further, as large investments flow into the market, the rupee will also strengthen, as in March, when it touched the 52-week high of 64.28 against the dollar," says Rohira. This will help foreign investors.

Returns from Indian equities have already outpaced those from global markets in the first quarter of 2017. India has returned about 12 per cent year-to-date compared with China's 4.4 per cent, Russia's -10 per cent , Brazil's 8 per cent and US' 6 per cent. "Among the bigger economies, India offers the highest growth, which is positive for foreign investors. This is reflected in our FDI inflows too," says Vaibhav Agrawal, Head of Research, Angel Broking.

In general, fund flows into emerging markets have been robust after the US Fed recently tempered expectations about front-loading of interest rate increases in 2017. This means investors will continue to prefer emerging markets over the low-interest-rate US economy. "Global factors, including commodity price movements, economic policies of the new government in the US and monetary policy stance of global central banks could have a bearing on capital flows into emerging markets like India," says a report by Anand Radhakrishnan Chief Investment Officer Franklin Equity -India.

Domestic Flows: Pandey says while the role of FII inflows cannot be underplayed, domestic institutions ploughed in Rs 37,200 crore into Indian equities in 2016, when foreign portfolio investor inflows touched a five-year low of Rs 18,800 crore. So, going ahead, while FIIs' role will be important, as it is with all emerging markets, the role of domestic institutions such as mutual funds will become bigger and bigger. Also, limited returns in other assets means people will continue to show preference for equities, especially equity mutual funds.

Themes to focus on

ICICI's Pandey says sectors that serve the domestic market are expected to do well in 2017/18 and 2018/19 on the back of favourable demographics, decent economic growth and revival of capital expenditure over the next couple of years. There is a consensus among market experts that consumption will continue to be a key long-term driver and sectors such as banking (especially retail-focused banks), automobile and fast moving consumer goods (FMCG) will hog the limelight.

Banking/NBFC: The emphasis on infrastructure and affordable housing in Budget 2017 will give a boost to banks. About Rs 5.8 lakh crore has been outlined as capital expenditure for the current financial year. "This means growth in credit offtake," says Rohira. "Further, banks, which have been reporting lower earnings due to non-performing assets, or NPAs, could see some revival with a major part of the NPA recognition exercise, pushed by the RBI, over," says Agrawal of Angel Broking. Banks also have the option of using surplus cash from demonetisation to lend profitably and write off NPAs. Non-banking financial companies, or NBFCs, too, will continue to be in focus as the impact of demonetisation fades. The government's thrust on affordable housing (39 per cent higher budgetary allocation this year) bodes well for housing finance companies. Automobiles: The auto sector has a weight of 11.5 per cent in the Sensex. "The increase in government spending on rural and agriculture sectors, followed by infrastructure, is expected to boost demand for two-wheelers and tractors," says Rohira. The bright outlook for the agricultural sector, and the resulting rise in rural incomes, will help automobile companies generate good sales.

FMCG: The push to agriculture and increased outlay on road connectivity are expected to improve living conditions in villages. The monsoon is also expected to be normal. All this will boost consumption demand. Further, a cut in the income tax rate -- from 10 per cent to 5 per cent -- for individuals in the income bracket of Rs 2.5 lakh to Rs 5 lakh means a saving of Rs 12,500 and a push to demand for FMCG goods. The GST will further lower costs, fueling consumption further.

Infrastructure: According to Pandey, the government's focus on job creation and falling interest rates will drive spending on infrastructure. This will benefit infrastructure and capital goods companies. Further, a recent announcement by the RBI to allow banks to invest in Real Estate Investment Trusts and Infrastructure Investment Trusts is more than likely to revive the cash-starved infrastructure sector. The affordable housing segment will pay an important role in earnings revival in sectors such as housing, cement, NBFCs, building materials, etc.

Upadhyaya of Kotak MF remains cautious on exporters due to sector-specific issues and headwinds from appreciating rupee. Also, a key concern for markets will be a sudden adverse change in oil prices, China's economic growth and direction of US policies. Domestically one needs to watch out for the monsoon, which could impact the entire economy and demand for a range of goods.

According to Radhakrishnan, periods of weakness in markets should be considered as investment opportunities by long-term investors. For mutual fund investors, he recommends systematic investment in diversified equity funds and hybrid funds to benefit from volatility.