Most awaited gadgets of 2012

A look at the products you need to keep an eye on this year.

This is a high-definition video calling system designed for HDTVs. Focused on personal video calling, a small cookie shaped device plugs into the TV's HDMI port and conducts a video call over Wi-Fi network. This device works over Wi-Fi and has a built-in microphone with a range of up to 20 ft. Expected to come for $199, it links with the Google Talk account. The device might not make its way to India, but is definitely a great gadget for video calling.

It the leaks are to be believed, Nokia is all set to unveil the successor to the Lumia 800 at the Consumer Electronics Show in Las Vegas. Operating on Windows Phone OS, it is supposed to include the Tango update lined for the first quarter of 2012. Other speculated specs include a 4.3-inch ClearBlack AMOLED display, 1.4 GHz processor, and 8 MP camera with LED flash and should run on 4G. Since November 2011, there have been rumours about an XBox 720 being demonstrated at the CES 2012. Although not much information is available about this gaming device, it is expected to have a six-core CPU, AMD graphics and 2GB of DDR 3 memory. Reports are also coming in suggesting that the console's launch might be delayed by another year. 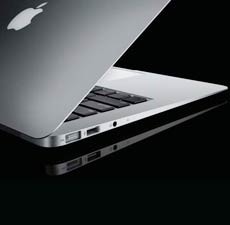 Apple's MacBook Air is a perfect blend of beauty with brains. Available in 11 inch and 13 inch, come March and Apple fans might just witness the launch of the new 15-inch MacBook Air. With Apple, you don't get any leaks before the launch. But when an Apple supplier claims the company is working on upgrading the existing lineup you better taking notice.

Designed for both tablets and conventional computers, Microsoft's Windows 8 will be the most talked about technology for 2012. With not much information around, it would be interesting to listen to Steve Ballmer at the CES 2012. Touch oriented, the OS boasts the Metro user interface, which is what makes Windows Phone 7 different. Microsoft has confirmed the beta release for late February. 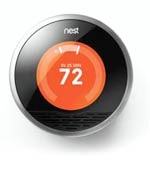 Although not common in India, people in the west always face issues maintaining the indoor temperature. Hence, Nest has developed a learning thermostat that programmes itself while saving energy. Within a week, it will learn the temperature requirements throughout the day and start adjusting itself accordingly. For instance, if someone turns the temperature down at night, it will do the same. The neat design has a circular display where a green leaf appears when the house is on energy saving mode. The company even allows one to control the temperature from a distance - online or through a smartphone application.

With Lytro coming into existence, it is time to look beyond the regular point-andshoot and even DSLR cameras. Unlike the regular cameras that add up all the light while capturing them as a single amount of light, Lytro uses an innovative lightfield sensor that captures colours and intensity along with every ray of light individually. Interestingly, using Lytro, one can focus on the image after actually capturing it. It is likely to be be priced around $399 for the 8GB version and $499 for 16GB. Kindle Fire, the 7-inch tablet from Amazon, is gaining in popularity with each day. Coming at half the price of an iPad, some considered it to be the competitor everyone was waiting for. In 2012, the new version of the Fire is expected to go into production in the first quarter with the expected launch in the second quarter. If sources are to be believed, the Kindle Fire 2 will have an 8.9-inch display and will catch up on some missing features like GPS, camera and microphone.

APPLE IPHONE 5
We don't know whether it will be called the iPhone 5 or something else. But knowing Apple, the next iPhone should be announced this summer at WWDC or some time later. With speculations about a bigger display size and, the new iPhone could also sport a completely new design. What we know for certain is that it will run iOS 6. OLED TVs aren't a new concept. But back then, there were manufacturing challenges involving the huge costs that stopped OLED from going mass. But LG is all set to showcase what it claims will be the world's first 55-inch OLED TV at the Consumer Electronics Show. OLED TVs will be ultra-slim, slimmer even than LED TVs, and more energy efficient while offering deeper black levels. This LG TV is expected to be 5 mm thin with a contrast ratio of 100,000:1 and a response time 1,000 times faster than in a regular LCD.

APPLE ITV
Rumours abound that Apple might enter the TV market this year. It is expected that the Apple iTV will be a game changer and completely turn the television market on its head, the way it did with the iPhone. But then, it could be just a rumour.

APPLE IPAD 3
The fist iPad was announced in March 2010 followed by the unveiling of the iPad 2 in January 2011. This year, the iPad 3 is expected to be announced in February on Steve Jobs' birthday. With Kindle Fire, the 7-inch tablet giving tough competition to the iPad 2 in the US market, some believe Apple will launch two version of the iPad-a 9.7-inch regular iPad and an iPad Mini measuring 7 inches. The latter might not be true, considering Apple doesn't change the display size of their gadgets so easily. Rumours also suggest that the iPad 3 will have a quad core processor, Retina display found on the iPhone 4, NFC chip, Dock Connector, etc. Only time will tell how much of these speculations are true. After Olympus, Sony, Samsung and Panasonic came up with mirrorless, interchangeable lens compact cameras, Nikon followed suit with two of its own-the Nikon V1 and Nikon J1. Both cameras have a 10.1MP CMOS sensor, EXPEED 3 processor and the new Nikon 1 lens mount. However, the J1 has a built-in flash whereas the V1 doesn't come with one. The two will make their way to the Indian market some time mid-2012.

NINTENDO WII U
The next gaming console from Nintendo is the successor to the Wii. The Nintendo Wii U is a tablet console with a 6.2-inch touch screen with stylus along with gaming buttons and two analog sticks on the sides. It will have internal flash memory along with option to expand it using SD card and USB hard drive using USB ports. Supporting full HD graphics (1080p)it has a front facing camera, gyroscope for motion gaming, built in microphone and stereo speaker. The Nintendo Wii U is expected to hit the markets sometime in 2012. 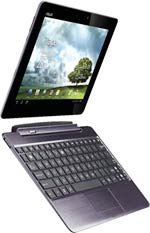 While a lot many smartphones and tablets are expected to run on quad-core processors in 2012, Asus has already launched its 1.3 GHz quad-core tablet running on NVIDIA Tegra 3 processor in the international market. This 10.1-inch LED backlit tablet is accompanied by a keyboard dock and will operate on Android 3.2 Honeycomb, till the time it receives the Ice-Cream Sandwich upgrade.

Samsung Galaxy S II was one of the top selling phones of 2011. And now the Galaxy S III is under development. Expected to debut in February at the Mobile World Congress, the initial rumours indicate it will have a super large AMOLED Plus HD display at 1280-by-720 pixels. Operating on Android IceCream Sandwich 4.0, it will run on a quad-core processor and feature 2GB RAM. Also, the camera will be upgraded to 12MP from the 8MP found in the Galaxy SII.

It's not just Microsoft and Nintendo who are gearing up for the next revolutionary gaming console. Sony has already announced the PlayStation Vita, the new handheld portable gaming system. Running on ARM Cortex A9 Core (4 core), the Vita has a 5-inch touch display. Along with front and rear cameras, it will also have a built-in GPS and will be available in two modes- Wi-Fi and Wi-Fi with 3G.