Pros and cons of buying a tablet, smartphone or ultrabook

Don't know what to buy - a smartphone, a tablet or an ultrabook? Gadgets & Gizmos lists out the pros and cons of each to help you decide.

Nidhi Singal / Nandagopal Rajan
WHAT IS GOOD ABOUT SMARTPHONES

Of late, tablets and Ultrabooks are stealing the limelight , but this doesn't mean that the smartphones are heading towards a slow death. Instead, smartphones are getting bigger and better. Giving competition to the 7-inch tablets are the new smartphones with around 5 inches of screen size. The bigger display offers more space for productivity as well as entertainment. With the extra real estate, typing over the onscreen QWERTY keypad becomes a lot easier. With phones like the Samsung Galaxy SIII, the screen can split for watching videos while working. The full HD bright display can be used for watching full HD videos and playing games.

As the smartphones are now used for power hogging apps, chip makers like Qualcomm and Nvidia are adding more power with their quad-core processors that can run multiple, power hogging tasks at the same time. The downside is that not many apps are available on the app stores that are optimised for the multi-core processor. These advanced processors now support full HD video capture as well.

TIPS: A guide to buying Ultrabooks

WHAT IS NOT SO GOOD ABOUT SMARTPHONES

While smartphones are the perfect multimedia device, it has its share of downfalls too.

To start with, the 5-inch display is smaller in comparison to the tablet and Ultrabook and doesn't come handy while typing long documents, creating presentations or handling work like compressing HD videos, etc. But then it it tough for phones to have a larger display as that will only act as a hindrance for its utility as a phone.

Secondly, the devices are constantly playing catch up with their operating systems. For instance, most Android phones running Gingerbread are still awaiting IceCream Sandwich updates. However, with iPhone, users across the world can instantly update the smartphone.

Smartphones do offer a good multimedia experience, but can't match up to ultrabooks. Lastly, smartphones with the best display, camera and processors costs a bomb. Not even a single flagship smartphone is priced below Rs 35,000. The cheaper options are always lacking something.

**Smartphones are becoming larger to be more productive and to make the best use of their heavy specs. But anything beyond five inches could kill their primary utility as phones** 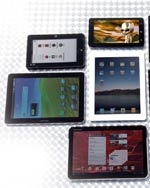 WHAT IS GOOD ABOUT TABLETS

The second most portable of the three categories is the tablet. Although heavier than the smartphones , tablets weight less than half the size of the ultrabooks.

Tablets are the perfect travel companion as they can easily slide into any bag without consuming much space. They can be easily held in the hand for long durations and can be used while standing as well.

Widely available in 7 and 10 inch displays, tablets are personal and flexible to use. These can be used for browsing the web, accessing emails and even reading books and newspaper. One can easily watch HD videos over the big high resolution displays, something the Ultrabooks still lack.

The touch interface offers great gaming experience too. Tablets are even good at taking notes, showing demos, adding annotations to the images, etc. Tablets get access to a wide variety of applications that enhances their entertainment and productivity experience. There are apps that can be used for calling and messaging, without much fuss. With the increasing megapixel count and better optics, tablets can be used as cameras as well.

With battery being one of the biggest driving forces for any gadget, tablets do offer a good battery backup. These can last for anytime between six to ten hours on continuous usage.

Lastly, tablets aren't priced exorbitantly. Considering, the best tablet available in the market, the new iPad has a starting price of around Rs 30,000. Today, we don't even get the best smartphone for less than Rs 35,000. As for Ultrabooks, we can't even dream of owning them at this price.

WHAT IS NOT SO GOOD ABOUT TABLETS

Tablets too have their share of troubles. To start with, unlike the Ultrabooks with their large SSD and hard disk drives, tablets barely have any storage. They come in different variants with a maximum of 64GB storage, split into onboard or onboard and expandable.

On the productivity front, typing over the touch keypad is difficult, especially while typing long documents and emails. An alternative can be attaching a Bluetooth keyboard to the tablet.

Even on the processing front, Ultrabooks have an edge. The recently launched tablets have got quad-core processors combined with 2GB RAM, but still can't compete on processing power.

Ultrabooks are designed with protection for their large screens. The screens of tablets are delicate and exposed if you don't have a protective case. So, all the time, one has to be careful with the tablets. And if damaged, the repair cost of the tablets is much more than the other two.

**Tablets are the ultimate travel device and can be good with productivity and entertainment, but they will break into a cold sweat if faced with hard work** WHAT IS GOOD ABOUT ULTRABOOKS

While the Ultrabooks got their name and fame and this will bring in aspects of convergence and convenience that we have not experienced so far. from their portability, of late their processing power has become their USP. There is no way you can process an HD video file on a smartphone or a tablet. For that you will need an Ultrabook, which with the latest 3rd generation Intel Core processors are ideal for video editing and can do the task at much greater speeds than even the 2nd generation. Productivity is without doubt the best feature of the Ultrabook.

The other scoring point for the Ultrabook is its battery life. Even the entry level Ultrabooks deliver six hours of battery life with a full use, most can do eight hours easily. This is no mean feat when you consider that these are full-fledged computers, which till a year back could hardly do four hours on their battery.

Ultrabooks are also becoming great entertainment devices. While you can do some snacking with video clips on your phone and maybe a bit more on the tablet, for back-to-back movie pleasure you need the larger screen size of the Ultrabook. Plus, these devices now have great quality speakers and come with audio tuned by experts like Dolby and Beats Audio, eliminating the need for external speakers.

Great technology is also about great design, and the Ultrabook is a great showpiece for this. They are without doubt the slimmest computers we have seen - well, most of them are. But they are also superb examples of how space can be utilised. A battery of USBs and other ports tucked into an Ultrabook which is not much thicker than a pen drive is no longer a rare sight.

WHAT IS NOT SO GOOD ABOUT ULTRABOOKS

While portability is its USP, manufacturers are now taking some liberties with the size and weight, especially with the 14 inch models. So now you have weights of above 2 kg (like in the Dell XPS 14) and thickness that is closer to the 1-inch mark. It is still the slimmest of the notebooks, but there is too much variation out there for our liking.

Even cheap feature phones now have 5MP cameras, but it is hard to find an Ultrabook or notebook that has even a 2MP webcam. Why computers still like to underperform in this aspect is anybody's guess.

While Ultrabooks make for good entertainment devices, it wouldn't be all that comfortable to use them for serious gaming. Their keyboards are not that well spaced out and hardcore gamers might not be all that impressed.

The biggest drawback at the moment for Ultrabooks is their value for money. There are no Ultrabooks available under Rs 50,000 and the really good ones will cost at least 50 per cent more. They have placed themselves as high-end devices and will not gain mass acceptance until the prices drop substantially.

**Ultrabooks are almost unmatched in their processing power, but they seem to putting on a few extra grams and centimetres of late**
In association with Gadgets & Gizmos