A guide to buying ultrabooks

The ultrabooks that we have in the market now. 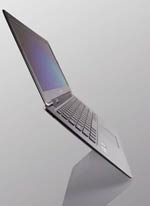 Acer never shies away from new technology and as a result itis often the first company to launch a new type of product in the market. So itwas no surprise that Acer was first off the block in the Ultrabook race in India, comingup with its Aspire S3 as early as November 2011. The S3 is one of the thinnestUltrabook models out there and bears a striking resemblance to the MacBook Air.It weighs 1.38 kg. With a full metal unibody design that will certainly ensuresome eyeballs, the S3 aspires to be right there among the frontrunners. It isnot a top draw Ultrabook as is obvious by the price. But then Acer has the S5lined up for the big fight. But that doesn't mean the S3 is weak in anyway. Ithas a great processing power thanks to its 1.6GHz Core i5 processor and 4GBRAM, and will certainly rise up to most tasks that you will throw at it.

The keypad, placed in a recess, is well spaced out andresponsive. There is enough travel to let you know that you have pressed a key,unlike some of its competition. The touchpad is at the centre, just below thekeys. Though it is quite large, there is no multi-touch here. It is even a bitclickety-clack towards the bottom. The power button is actually on the hingejust below the bezel and can even be access from outside when the flap isclosed-but we are not sure this was intentional.

The 1366x768 screen is goodenough to watch HD movies on and the professionally tunes Dolby Home Theaterspeakers ensure you have audio good enough to go with the picture. You will,however, need to get the viewing angle right for perfect picture. Similarly,the sound gets better when you plug in a good pair of headphone, though youwon't need it at all times. The S3 has two USB and one HDMI port at back, onthe hinge. But it also has a MicroSD slot at the side, something you won't findin all Ultrabooks. However, a drawback will be the battery life of just aboutfive hours on full charge. Not bad when compared with laptops, but at thebottom end of the Ultrabook pile where devices boast of up to 10 hours ofjuice. But then this is an entry level Ultrabook and the only option if you arelooking to upgrade from you old laptop without paying more than what you paidfor the old model. It is not always that you get a laptop delivered to you in alarge envelope. But HP's Folio 13 came to us in one, and we were impressed. Thepackage could have easily passed off for documents from a bank for a houseloan-no one had an inkling that it, in fact, held an Ultrabook, a rather largeone at that. Yes, the Folio 13 is slim and sleek, but not as much as some ofthe other Ultrabooks we have tested. That is not because this is a bulkydevice-at 1.5 kg it is, however, a few grams heavier than the rest. In fact,the Folio 13 tries to be true to itself by keeping its thickness constantthroughout with no thinner or sleeker edges.

The slightly stocky build also means this device hassomething which the other Ultrabooks don't, an RJ-45 Ethernet port. To makespace, the fan grill is placed beneath, unlike the others which have it on theside. The 13.3-inch diagonal LED-backlit HD BrightView is good, thoughsomething bright would have really sexed up the device. More so, because belowthe screen, on the hinge, is a speaker strip which really adds some oomph tothis Ultrabook with the Dolby Advanced Stereo really standing out to be heardloud. The full-sized, spill-resistant, backlit chiclet keyboard comes with UVcoating and is very easy to type on. Plus, the touchpad come with gesturessupport, a feature which we thought most of the others missed out on.

Anotherreal good feature is the on/off key (f5) for the backlit keyboard, a good wayto save power. And the Folio 13 does save some power, for it can run up to ninehours on a single charge. The Folio 13 comes with three USB ports, one of themUSB 3.0, and a HDMI port. Another good touch is the LED indicator to show ifthe webcam is on. The Folio 13 retails abroad for around $900, but in India itcarries a price tag of Rs 69,990, which might put off some buyers. But stillthe Folio 13 has features which can make it a good option for corporate buyers. 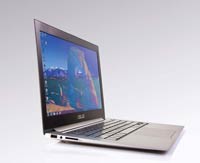 Metal might be associated with brawn, but it can also bestylish, in a macho sort of way. The Asus UX31 Zenbook is all about style witha metallic edge, quite literally. The edge comes from the taper towards thefront, making this ultrathin Ultrabook look even thinner. The sharp featuresare accentuated by the taper coming in from the bottom too-the front thicknessis just 3 mm, while it is 9 mm at the rear giving this device a clamshell kindof feel. Asus says it was aiming for an angular harmony with the design, and wemust agree that they have been successful.

Despite the all-aluminum body, theetched concentric circles on the cover and the linear brushed deck blend intoeach other seamlessly. Even the keypad is embedded with the metal keys lookinglike they were a part of the body. There are no other buttons beyond the keypadinto which even the power button has been added. The trackpad below is largeand very responsive, though there is no multi-touch.

You can, however, swipe through pictures. Here too, thespeakers have been blended into the hinge and still give the best sound amongthe Ultrabooks we have seen. For this feat we have to thank Bang & Olfusen,whose ICEpower SonicMaster powers these speakers. But the real hero of thisZenbook story is just above the speakers - the 13.3" 450 nits HD + 1600X900screen. No doubt this is the best screen among Ultrabooks available now, but wealso doubt if even regular laptops have come up with something as good.

There is hardly any glare at regular viewing angles, nor doyou get the feeling that image is washed out. The unit we tested was running anIntel Core i7 2677M CPU with a Windows Home Premium 64-bit and was up to thetask at all times. There was no laggardness with even high-resolution pics orHD video. The Zenbook takes just two seconds to spring back to life from sleepand really pushes the standard for its rivals. There is a Micro-SD slot and twoUSB ports, including a USB 3.0. The unit comes with a fabric pouch carryingHDMI and VGA adapters, which you can plug into the micro ports in theUltrabook. Despite the superb performance the Zenbook can ensure about sevenhours of juice on full performance. Sadly, the Zenbook, which is cheaper thanthe MacBook Air in the US,is selling in Indiafor Rs 89,999, making it one of the costliest Ultrabooks around. It is anotherthing that the performance and features sort of justifies the price. Lenovo Ideapad U300s is right up there as far as Ultrabooksgo. One look at the grey single-piece aluminum shell of the U300s and you knowthat this is cutting edge stuff. The cutting edge is a bit literal if you runyour hands on the sharp lines that run on both the edges. The edges merge asthe back in a smooth flow, design at its best. The U300s has a maximumthickness of just 1.49 cm, and weighs just under 1.35 kg. The 13.3-inchultraslim 16:9 widescreen HD display is crystal clear, though we found that itwas reflecting far too much light at certain angles. The sound is also topnotch, and the speakers with SRS Premium Surround very good for something thissmall. The keypad is spacious and features the unique Breathable Keyboard, anIntel advanced cooling technology that allows air to flow in through thekeyboard and out of the sides and rear hinge. Lenovo says this design removes the need for vents on theunderside of the notebook, and this could be why all the U300s needs is a smallvent for fan louvers on the right edge. The touchpad is big, but does notfeature multi-touch. Sticking to the Ultrabook standard, this one too featuresIntel Core i5 with 4GB DDR3 memory and up to 128 GB of SSD storage. Do somespreadsheets or open hi-resolution pictures and you realise that this is areally mean machine. The U300s can come back to life from sleep in under fiveseconds thanks to Intel Turbo Boost Technology 2.0. Lenovo has also added aone-key recovery, which is usually associated with conventional laptops.

The battery life on the U300s is also better than in many ofits competitors, easily giving about seven hours on a full charge. Then thereis the Lenovo RapidCharge, which lets users charge the battery to 50 per centcapacity in just 30 minutes. The 1.3MP webcam can do 720p HD video and comeswith an integrated YouCam software which is fun to play around with. There aretwo USB ports, including a Bluetooth 3.0, an HDMI port and high-speed 802.11nWi-Fi. The U300s is also enabled with the Intel Wireless Display (WiDi) Technologywhich lets you play content on a larger screen wirelessly. However, the LenovoIdeaPad U300s is not exactly cheap and comes with a Rs 67,990 price tag.

Ahead of the Pack 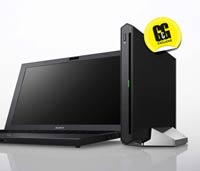 If you want to see how much Ultrabooks can push the limit,you should take a look at the Sony Vaio XPCZ227CG. To start with, thisultrathin Vaio is not meant for the average user who wants a sleeker computingdevice. The price tag of Rs 1,59,000 is enough to scare away most non-seriousbuyers.

But for those who have the capacity and willingness to pay ahefty premium for some cool features, this Vaio has more than most otherUltrabooks. Though it is not as thin as the Asus Zenbook, it does shave offover 300 gm from 1.5-kg standard set by Intel. The screen is among the best youwould find in this class, with the 13.1-inch Full HD LED backlight hardlyreflecting any light in most angles. Though we were not as impressed by thesound, it is decent by any standards.

The 83-key backlit keyboard has more features than anythingthe competition has to offer. Just above it is a Wireless on/off toggle, andtouch buttons to access the Web, VAIO controls and Assist. The trackpad issmaller, but comes with gesture controls and fingerprint recognition. There arealso LED indicators for caps lock and number lock.

Like in some other top-end laptops from Sony, there is aVaio Gate Dock which drops down from above the screen if you move the cursorthere. The dock gives you onetouch access to most-used programmes. To add tothis features if the gesture controls enabled for browsing media files. You canmove to the next song or video by just swiping you hand in front of the screen- just make sure you do it in such a way that it is obvious to the 1.3MPcamera. The processing power of the i7-2640M Processor 2.80 GHz with TurboBoost is obvious when you swish through the hi-resolution pictures by justwaving your hand or clicking the cursor. The absolute absence of lag is tooobvious to miss.

The XPCZ227CG comes with 8 GB DDR3 SDRAM and 256 GB SSDstorage, which explains the four-second start-up time. This Ultrabook comeswith a RJ-45 network connector, mini D-sub display output connector 3Dsupported HDMI connector and 2 USB ports. If that doesn't satisfy you, there isa Power Media Dock in the box which while being a full Optical Blu-ray DVDdrive with writer can also give an assortment of five additional ports. Thedock can also be used to charge the computer. There is also a SD card slot anda Magic Gate slot for Sony memory sticks. Almost all of these are featureswhich the other Ultrabooks lack. These features also make the Vaio XPCZ227CGmore of a business Ultrabook, and explains the price to an extent.