Will the festive season bring cheer to the real estate market?

Does it make sense to buy now or wait for a price correction, which may or may not happen?

September heralds the start of festive season. It is the time of the year when people want to make new investments and purchases. To cash in on the sentiment, property developers come up with discounts and schemes to attract buyers, offering freebies such as gold coins, car, holiday trip and modular kitchen. However, this year, with sales slowing, developers are under a lot of pressure to clear inventory. To encourage people to buy, they have been coming out with various schemes and even negotiating prices with potential buyers.

Not just developers. Banks and other lenders, too, try to cash in on the festival fervour by giving loans on easy terms. For example, with HDFC Bank recently slashed its base rate by 35 basis points (bps) to 9.35 per cent and other banks likely to follow suit, loans could become cheaper. All this could result in higher sales, usually 20-25 per cent more than the rest of the year, during the season. The last couple of years have been dull for the real estate sector due to excess supply, indefinite delays in projects and regulatory hurdles. Prices, too, have been stagnant. That is why despite the plethora of offers, potential buyers are wondering if it is the right time to buy a house.

Saacketh Chawla, Deputy Managing Director, Colliers International India, says: "Generally, the festival season is a good time for real estate players. This year we have already started witnessing some traction in the market." He says in Mumbai, some major players such as Oberoi, Tata, Piramal and Peninsula have come up with major launches for the pre-shraddh period. In 2015, shraddh dates are from September 28 to October 12. Let's look at some of the schemes being launched. Also, does it make sense to buy now or wait for a price correction, which may or may not happen?

There are many schemes such as 20:80, 10:80:10 or 8:92 that allow you to buy the property by making part payments. Some developers have also launched subvention schemes. How subvention scheme works Suppose you book a house under the 10:80:10 subvention scheme. Under this, you have to pay 10 per cent money upfront to the developer. The rest is paid by the bank in the form of loan to the buyer. The bank releases the loan to the developer as construction progresses. The developer pays EMIs till possession or for a period mentioned in the agreement. The scheme works well for those who stay on rent. This way, they don't have to bear the burden of both EMIs and rent while their house is being built. LOW INTEREST RATES
The developer offers a lower interest rate for the fi rst few years by paying a part of the interest on the loan to reduce your EMI.

You buy a house and pay EMIs at the normal interest rate. The interest differential is reimbursed by the developer after you submit the proof of interest paid. Generally, such schemes are applicable for the fi rst few years.
Watch out for It is not the bank which is giving you a discount.

The developer offers guaranteed income either until possession or after possession. This is for those who want to invest in income-generating assets, want a guarantee on their investments.

How it works? The developer either pays you rent for a fixed period during construction or after possession. In the fi rst scheme, the buyer gets regular payments from the developer during construction which offset his or her EMI/rent costs. In the latter scheme which is generally for properties that are outside city limits, the developer offers rental income to the buyer after possession. The tenure of both the schemes is fixed. DISCOUNTS AND NEGOTIATIONS
With distressed selling happening, experts say it is the best time to buy a house. According to the latest Knight Frank report: "Stagnant prices and delayed project deliveries have contributed towards investors entering into a 'distressed resale' mode, as they are now offering to exit at a 15-20 per cent discount to the primary market price." Moreover, with oversupply, it is a good time to enter into negotiations.

Sumit Jain, Co-founder & CEO, CommonFloor.com, says: "With multiple options, buyers are spoilt for choice. Considering this, it is a good time for end-users to enter the market and negotiate with the builder/seller." Saacketh Chawla of Colliers agrees: "Genuine buyers may be able to get good discounts from developers at a time they need funds and sales are down. However, the buyer should make sure that the price point on which the developer is offering a discount is not already inflated." Experts say though the offers may be tempting, buyers should keep their eyes open. This is because these offers could be a way to attract buyers for a project that may be unviable or difficult to implement because of problems with approvals. So, before buying, buyers must check whether all approvals are in place or not. Real estate has always been the most sought-after asset class. And with good reasons, considering the kind of returns it has delivered in the past. Even after the fi nancial crisis of 2008, some real estate markets saw unprecedented growth. People shifted to real estate and gold as safe havens as their investment in equities lost more than half the value. The increased demand for real estate between 2009 and 2013 saw prices double in some markets. For example, Noida Extension, one of the key markets in Delhi-NCR, saw prices rise from `1,830 per sq.ft. in March 2010 to `3,056 per sq.ft. in March 2012, as per data by PropTiger.com.

Unavailability of affordable houses in Mumbai led to a signifi cant rise in prices in areas like Dombivali which fall in the Mumbai Metropolitan Region (MMR). Prices in Dombivali went up from `2,176 per sq.ft. in March 2008 to `4,856 per sq.ft. in March 2012. But after 2013, prices have stagnated or even declined across markets. Real estate was the second-worst performing asset class in 2014 after gold. One of the biggest reasons for this was the fl urry of new launches in 2010/12. As a result, supply is more than demand in most part of the country. According to a report by Knight Frank: "Delhi-NCR, India's largest residential market, is looking at an unsold inventory of 189,768 units."

It will take nearly fi ve years to get fully absorbed at the current pace. With market dynamics changing, experts say prices are not expected to rise sharply in the near future and those looking for quick returns should stay away. Rajeev Bairathi, Executive Director, Knight Frank, says: "Whether commercial or residential property, the investment should be for the long term. Real estate is a long-term asset class and, therefore, the investment horizon should be fi ve to seven years." Investors earned huge returns during the real estate boom between 2004/05 and 2010/11. But in the current scenario, with inventories piling up across the country, experts say one should not expect huge returns. They expect only a slight price rise in various markets. However, for end-users, it's a good time to seal the deal.

Expectations were high among developers that factors like a new government at the Centre and lower interest rates will give the sector a new lease of life, but nothing of that sort has happened yet. Contrary to that, inventories are piling up across markets as people are sitting on the fence waiting for the right time to buy.

Sales in the first quarter of 2015/16 tanked 18 per cent across nine cities (Ahmedabad, Bangalore, Chennai, Gurgaon, Hyderabad, Kolkata, Mumbai, Noida and Pune), as per data by Prop-Tiger.com. Some markets, such as Noida and Chennai, witnessed an even sharper correction. Only 49,448 units were sold in the first quarter, compared to 60,435 units in the previous quarter. All these markets saw sales fall in the range of 5-34 per cent.

According to an Ambit Capital research report: "Our visits to five property registration offices in Mumbai suggests a sharp drop in registration of new residential properties and data from property valuers in Maharashtra and Tamil Nadu suggests that transaction volumes have fallen by 10-15 per cent per annum for three consecutive years now. Also, new launch volumes are down 40-80 per cent on a pan-India level."

According to the report, property prices may fall by half by next year. The situation has became so bad that real estate has given less returns than bank fixed deposits in the last one year. The biggest issue faced by buyers is the inability of builders to deliver projects on time. The problem of delayed delivery has become very acute, especially in Delhi-NCR and MMR markets. 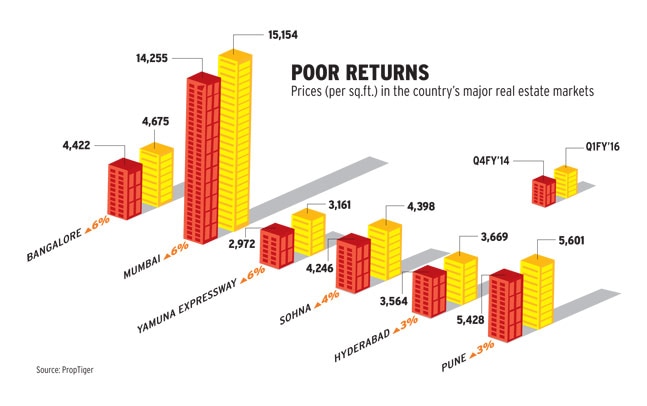 While some say that there is an oversupply in the market and buyers are still waiting to make an informed decision, Sumit Jain of CommonFloor. com, says there are multiple positives that we must look at.

Unlike earlier, buyers now have a plethora of options depending on budget, requirements, etc. Moreover, various government initiatives such as the Haryana affordable housing policy and the Delhi land pooling policy will lead to building of affordable houses for low and middle income groups.

Developers focusing on completion: One of the major positives has been that developers are now seen to be focusing on completing previous projects rather than launching new ones. CommonFloor. com data suggests that the number of new project launches in the second quarter of 2015 fell considerably in most metros as compared to the second quarter of 2014.

One of the positive developments at the policy level has been the cuts in the repo rate. Experts say the Reserve Bank of India (RBI) may cut interest rates further. It has cut the repo rate three times this year, by 75 basis points. This is good news for home loan borrowers as it has given banks some room to bring down their lending rates. Banks have, however, been slow in passing on the benefi t to customers. They have reduced home loan rates by a maximum of 25 to 30 bps. After the recent rate cut, EMIs have fallen by `823 on a home loan of `50 lakh for a tenure of 20 years, if the interest rate is 10 per cent. In case the loan is for `1 crore, the amount saved will be `1,650. Had banks passed on all the benefits to customers, that is, reduced the home loan rate by 0.75 per cent, borrowers would have saved at least `2,458 on a loan of `50 lakh at an interest rate of 10 per cent. A person would have saved `4,915 on a home loan of `1 crore for a tenure of 20 years.

The government's 'Make in India' and 'Digitisation' initiatives have created hope in the real estate market. Indian property lacks regulation, professionalism and transparency. According to a report from Ambit Capital, more than 30 per cent of India's real estate market is funded by black money. The size of India's black economy expanded materially under the erstwhile government and given that black money finds high acceptance in physical assets such as real estate, a large portion of these funds were presumably channelised into real estate. However, the NDA government is engineering a clamp down on black money in India. The 2015/16 Union Budget explicitly aims to disincentive black economy and curb the demand for physical assets.

Offers and freebies must be closely examined. It is always good if you fi nd out what prices were prior to the discount. So, one must always decode the offers to determine the actual money saved. With inputs from Jinsy Mathew