VeryFirstTo takes you to cinema's most iconic destinations

Remember the movies you watched and loved as a child? A new world tour lets you live them, scene by scene

Recall the days of old, when movies were the ideal getaways to places far away- the vast desert in Lawrence of Arabia to the picturesque waterhole in The Beach?

Well, now's your chance to revisit them, and this time it's for real. As part of a whole new holiday package for movie buffs, VeryFirstTo (in a tie-up with travel firm Unmissable) offers you the opportunity to see some of cinema's most iconic destinations first-hand, whether it is the Wudang Monastery as depicted in Crouching Tiger Hidden Dragon or the streets of Montmarte, Paris, in Amelie.

The Blockbuster Trip, as it is called, takes couples on a three-month global trip that incorporates visits to 20 exceptional destinations made famous by popular films, and guided tours that enable them to relive scenes from classics like Chocolat and When Harry Met Sally. However, the cost - at  Rs 198,000 per couple - is significantly more than a movie ticket, so you better get those doubloons hopping! Tired of eating the same ol' hammy sandwiches they serve aboard international flights? Well, you don't have to, especially if you are flying Malaysia Airlines.

Chef-on-Call, an exclusive service provided by the airlines to its first and business class passengers, offers you the opportunity to choose from an array of dishes - ranging from Malaysian favourites to food for the health conscious as well as all-time continental fare. Passengers can select their meal choices online before catching their flight by visiting www.malaysiaairlines.com/chefoncall or by simply calling the Malaysia Airlines call centre at 1300-88-3000. But there's a catch; the service is currently being offered only on flights to select destinations.

A window to waterworld 'Sleeping with the fishes' may sound quite ominous, but rest assured, there is no Sicilian twist to this one. The Manta Floating Resort in the Indian Ocean, near Pemba Island, presents travellers with a whole new way to get up close and personal with marine life. From the middle floor of this Swedish-designed facility, you can jump into the blue waters. The heavily-windowed bedroom makes it easy to spot exotic fish, and the ocean is illuminated by strategically placed spotlights so that viewing can continue late into the night.

Jetway into the future

Tired of trawling through customs and standing in long queues during brief stopovers? The future may hold an answer for this long-standing grouse of the jetsetting individual.

Architect Margo Krasojevic has created a visually striking yet delightfully mobile miniature 'Jetway' hotel that can be placed directly beside a just-landed private jet. Once in position, the 'pop-up hotel' - complete with a lounge area and an integrated entertainment system - can provide passengers with a base for up to 24 hours.

The telescopic shell of the hotel, which is still in its design stages, can also be extended or contracted - depending on the passengers' requirements. Jetway's interiors are lined with a combination of laminated glass, photovoltaic cells and fully controllable LED lighting, and the exteriors contain Perspex-encased tritium sections that glow.

If you have a thing for lighthouses, here's good news.

The Indian government has announced a project to promote the ship-guiding structures as tourist spots, and the first in line would be the Kanhoji Angre lighthouse on an island with the same name in Mumbai. The facilities at the tourist attraction will include a jetty, a passenger terminal, a viewing gallery, tent-style lodging facilities and high-profile restaurants.

The lighthouse and the island are named after Kanhoji Angre, leader of the Maratha navy during the 18th century. While the fort was built by the Portuguese in the 1700s, the lighthouse came about in 1866.

TECH AND THE FREQUENT FLIER 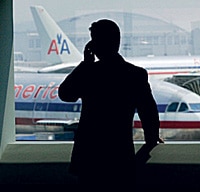 Airline passengers swear by technology, with over 90 per cent claiming that it helps them while travelling, a passenger IT trends survey by the Societe Internationale de Telecommunications Aeronautiques has found.
The study - carried out on a sample of 299 million passengers passing through six biggest airports in the world - also found that at 76 per cent, the proportion of passengers carrying smartphones outstrips the global average of 40 per cent in the general population. It also found that 69 per cent of the respondents booked their tickets through websites and 20 per cent used a kiosk for check-in on the day of their journey. However, actual rates of usage of these services remain below 5 per cent.

Free (Android, iOS, Windows)
By kayak.com
With the Kayak mobile phone application,
compare hundreds of travel websites on your smartphone or tablet in a matter of seconds. Find the right flight, the perfect hotel, and even manage your itinerary or track your flight status without ever having to contact a travel agent again. How's that for a great idea?