The biotech company walks its talk with a European buy. 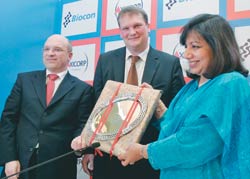 Another deal
After announcing her intentions to tap the lucrative European market for her range of products, Biocon founder Kiran the Bangalore-based company’s range of insulin products. It is estimated that AxiCorp has launched around 180 products in the market and Biocon is expected to leverage this experience and its distribution network to vend its products, especially recombinant human insulin in Europe. “We can’t build this distribution set-up on our own, and AxiCorp will help us gain this foothold in what is a very competitive market,” Mazumdar-Shaw says.

Already, she has inked a deal with Neo Pharma to set up a joint venture called NeoBiocon to target the diabetes and oncology markets with its biotherapeutic products. According to some industry estimates, these two segments are the two fastest growing in the $5-billion Gulf Council market.

The move to buy the m75-million AxiCorp also sees Mazumdar-Shaw take further strides in the development of Biocon into a global bio-pharma company. She kicked off this process by selling Biocon’s enzymes business to Danish firm Novozymes for $115 million in July last year. The proceeds from this transaction helped Biocon report a one-time five-fold increase in profits and at the same time free up funds for deals like the just-concluded one for AxiCorp. Biocon has also begun the spade work for its foray into the European market by starting the registration of its recombinant human insulin with the European regulator EMEA (European Medicines Agency). The German market for insulin alone is estimated at almost m1 billion, according to Dirk Ullrich, General Manager for AxiCorp, who ran Sanofi-Aventis’ insulin programme until recently.

According to Biocon executives, the firm gets around 25 per cent of its business from the European market and it hopes to increase this figure to as high as 40 per cent in the next two or three years.

Besides giving Biocon a foothold in the European market, the AxiCorp buy paves the way for it to introduce biosimilar products, since Europe, unlike the US, has clear rules on biosimilars. According to industry estimates, the market for biosimilars of insulin, human growth factor, colony stimulating factors, interferon alpha and interferon beta could be around $20 billion.

Despite pressure from the industry, the Food and Drug Administration has been slow toput in a regulatory mechanism to approve these drugs, because of what it says are multiple challenges in the development and manufacturing of these drugs. In contrast, the European Medicines Agency has a fixed procedure for generic approval and this could see firms aggressively tap this market, with Biocon itself expecting to launch its revolutionary oral insulin product in the market, once the product is unveiled by 2010.