Media spends on the internet show the highest growth in 2007. 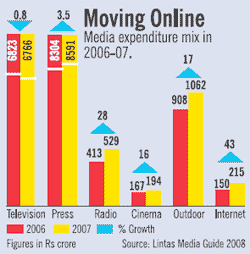 With so many new television channels—entertainment, news, sports et al—entering your living room every other day, you’d think entrepreneurs on the broadcast bandwagon are raking it in by way of advertising revenues. Not quite. The Lintas Media Guide 2008, in its analysis of media spends, reveals that expenditure on television, which makes up close to 40 per cent of the entire pie, actually dropped a bit—by 0.8 per cent over the previous year, to Rs 6,766 crore in 2007. A more traditional medium, press, nudged ahead by 3.5 per cent. The big growth came in the newer pieces of the pie—28 per cent for radio, and 43 per cent for the internet, also known as the digital medium.

The current internet reach in the country is 3-5 per cent. With the likes of Microsoft donating computers pre-done in various languages and scripts— like Hindi and Tamil—penetration is expected to improve in a big way. De Souza thinks it could go up to 10 per cent by end-2008. Clearly, if you’re not online you’re off line.