For business consulting firm, Bain & Company, India is an important place to know as it is one of the top geographical priorities at present. No surprise then that Bain recently held its Asia-Pacific partner/manager meet in New Delhi.

For business consulting firm, Bain & Company, India is an important place to know as it is one of the top geographical priorities at present. No surprise then that Bain recently held its Asia-Pacific partner/manager meet in New Delhi. “I think it reflects the importance that we place on India,” says Steve Ellis, worldwide Managing Director, Bain & Co.

“The core dynamics of this economy are exceptionable and arguably unprecedented,” he adds.

Naturally, a booming economy should generate enough work for Bain, too. “This market is geared for being entrepreneurial, for moving quickly and for valuing results,” he says, adding that the Bain business model of performance-linked fees is particularly suited to the Indian scenario. Worldwide, Bain derives nearly a third of its revenues linked to the performance of its clients. It claims that its clients outperform the market 4 to1. 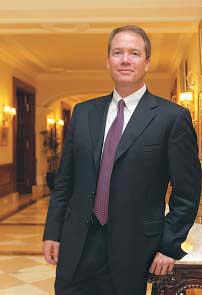 For projects in which Bain helps companies improve operations or reduce costs, the fees at risk could be as high as a third of overall fees, while for strategy projects where immediate results are not visible it could be around 15-20 per cent. Even in case of deals involving private equity firms, Bain sometimes co-invests with the firms. Globally the firm has invested over $500 million over the last decade in such deals. “Our business model—putting our fees at risk and thinking like owners and not like advisors—is very suited to Indian promoters,” says Ashish J. Singh, Managing Director, Bain & Company India.

Singh believes that the promoters of Indian companies have a whole set of new aspirations now. “In the last 4-5 years, a lot of what were small and medium-sized companies have become fairly large companies now. They are a big part of what we are doing in India,” Singh adds. Ellis concurs. “We often find that medium-sized businesses have most aggressive goals and are more committed to dramatic growth,” he says.

And that rapid and often dramatic growth is what keeps throwing up opportunities for Bain, be it creating scalable organisational processes to support the next level of growth or hiring the right talent.

A recent Bain client in India typifies the tectonic shifts in Indian management space. A company with a turnover of Rs 1,000 crore in the industrial segment is targeting a turnover of Rs 12,000 crore in the next five years. Such transitions are not easy particularly for promoter managements. Add to it other common constraints such as infrastructure, rural distribution, supply chain wastages and there is enough to plan.

In the last few years, most Indian companies had focussed on operations and business processes. However, “now more and more companies are looking ahead strategically… at issues such as the strengthening rupee or the rising oil prices. That is also because businesses are far more global now,” says Singh. All this leads to increased thinking about cross-border mergers and acquisitions as a means for growth.

All that means more work for Bain. “We are pouring both financial and more importantly human capital resources in India,” says Ellis. But then India, he claims, has already been the most successful new market launch for Bain. In the last year, its India revenues have grown by 100 per cent.