India Inc. at the gate

Asset-hungry promoters prefer the West (to the East).

Venugopal Dhoot
Last fortnight, at least five heavy-duty assets went up for sale in Korea—Hyundai Engineering & Construction, Daewoo International, Hynix Semiconductor, Daewoo Electronics and Daewoo Shipbuilding. Indian companies in the past have tasted blood in that country—Tata Motors acquired Daewoo Commercial Vehicle in 2004; and the Videocon Group, after some tribulation, has rekindled its bid for Daewoo Electronics.

However, given a choice most Indian promoters would prefer to give Korea the go-by. “Sellers there always like the buyer to be an insider (a Korean). Also, the cost of doing business is high there,” explains Venugopal Dhoot, Chairman & MD, Videocon Group. Investment bankers echo the same concerns. Says Aditya Sanghi, MD (Investment Banking), YES Bank: “Apart from ethnic issues (language and culture), regulations, the legal system and labour laws have seen India Inc. inclined more towards the West than the East.” Adds Ravi Sardana, Senior Vice President (Investment Banking), I-Sec: “There are also concerns over the nature of assets and, most importantly, India Inc. doesn’t want assets where they have to invest time in restructuring. Secondly, when you get American assets at a cheap price as against assets in India or in Asia then why would someone prefer other assets.” 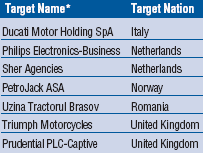 If you go by the straws in the wind on The Street, however, Europe appears to be at the heart of the action. A clutch of Indian companies, from Bajaj Auto to TCS, is said to be eyeing businesses in the UK, Italy, The Netherlands, Norway and Romania (see table). According to M&A consultancy Grant-Thornton, of the total $32 billion purchases done by Indian companies to acquire 243 companies last year, Europe accounted for a little over half of the total deal value (Europe and the US accounted for 90 per cent).

But don’t rule out Korea. “They (the Koreans) are slowly realising the power of India and Indian companies and the confidence among them is gaining that we will take care of the locals,” says Dhoot.