What is it about the Gujarat Chief Minister that draws Corporate India to him? 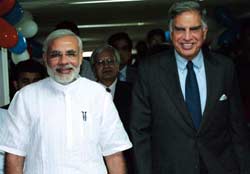 Smiles all round
When the Nano drove into Sanand, near Ahmedabad, on October 7, following an agreement between the Tatas and Gujarat’s Narendra Modi government, it surely must have come as a huge relief to Ratan Tata, anxious to find a new home for his beleaguered small car project after the fiasco at Singur. For Narendra Modi, Chief Minister of Gujarat, clearly, the Nano project is a feather in his cap. It gave him another opportunity to showcase brand Gujarat and build on the state’s reputation as an investor-friendly destination.

Indeed, for Tata, the Gujarat deal is perhaps better than the one offered by West Bengal. Against 1,000 acres on initial offer in West Bengal, Gujarat has given 1,100 acres to Tata Motors at prevailing market rates. What really impressed the Tatas was the speed at which the project got the nod from the Modi administration—it took just 10 days for the Gujarat government to work out the package for the Tatas. 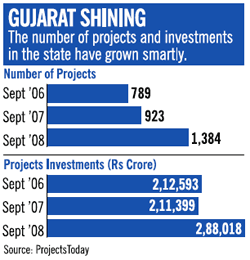 Indeed, like Ratan Tata, there are plenty of other admirers of Modi in India Inc. He is widely credited with rebuilding the image of the state after the 2002 Gujarat riots had seriously dented his credibility. B.K. Goenka, Vice Chairman and Managing Director of the Rs 14,000-crore Welspun Group, which has substantial operations in Gujarat, says Modi has brought a “corporate attitude” to the government structure. “Right from initial approvals to infrastructural support, including land allocation, the Gujarat government virtually steps into the shoes of investors to decide what is best required by the companies to compete globally,” he says.

Yoginder Alagh, former Union minister and now Chairman of the Anand-based Institute of Rural Management (IRMA), says the Nano project is an endorsement of Gujarat’s industrial vitality, which will bring muchneeded high technology into the state and strengthen the local auto component industry in the SME sector. Alagh also believes that “a lot of credit” needs to be given to Modi for the involvement and speed that his administration demonstrated in bringing the car project to Gujarat.

True, Modi has his share of detractors as well. The opposition is already crying foul over the deal offered to the Tatas. Arjun Modhwadia, the spokesman of Gujarat Pradesh Congress Committee says: “Land worth about Rs 1,000 crore is being sold to the Tatas at a throwaway price.”

All said and done, Modi has managed to pull off a major coup by bringing Nano to Gujarat.

• One of the few states to have substantially higher private sector investments than public investments.
• Has relatively peaceful industrial relations climate.
• Relatively untouched by protests over acquisition of farm land for industry.
• Thriving entrepreneurial culture and SME clusters.