Not the beetle, but small it is

With plans to introduce the Jetta, a Honda-Accord/Toyota-Camry-sized car in a few months, Volkswagen is beefing up its dealer network.

It has been a few months since Volkswagen (VW) set up shop in India, and the going so far, says Joerg Mueller, Managing Director, Volkswagen India, has been good. “We are on schedule to launch our own small car in India by 2010. This will be in the fiveseven lakh price range and put us in the middle of the market,” he says. It will be based on the Polo platform, but will be designed from the ground up keeping in mind Indian needs and conditions. 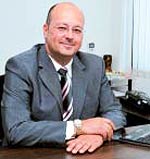 Joerg Mueller
“We are not here to be a bit player, we want to have a 10 per cent share of the market, and this is a growing market,” says Mueller, who has a new plant coming up in Chakan near Pune to manufacture the Skoda Fabia (Skoda is part of VW). VW has always been serious about emerging markets. It is the number one car maker in Brazil and China and is aggressively expanding into Russia.

With plans to introduce the Jetta, a Honda-Accord/Toyota-Camry-sized car in a few months, Volkswagen is beefing up its dealer network. “We plan to sell 200 Jettas a month and have added dealers in Punjab, Delhi and Hyderabad,” reveals Mueller. By the end of the year, the company will have 10 dealerships. “But before the small car comes, we will need to have anywhere between 100 and 120 dealerships on the ground,” says Mueller, who has been part of VW projects in Brazil and China. His goal, therefore, is simple: he wants to make India another stomping ground for the German car group. The East Asians had better watch out.