Former NSE Managing Director and CEO Chitra Ramkrishna may well be in the news for alleged wrongdoings and her links with an unknown person. But questions must also be asked of market regulator SEBI for the systemic lapses

A lengthy order from capital markets regulator Securities and Exchange Board of India (Sebi) is nothing new. The watchdog also has a history of issuing important orders late on a Friday night when most people are looking forward to the weekend. So, when a 190-page order was released late on February 11 against the National Stock Exchange (NSE) and its former honchos Chitra Ramkrishna and Ravi Narain, and an individual named Anand Subramanian, it was assumed to be important. And indeed it was. The order laid down intricate details about how Ramkrishna, who was the MD & CEO of NSE from April 2013 to December 2016, flouted norms to recruit Subramanian at an exorbitant salary—when compared to his then prevailing compensation—and practically made him her second-in-command.

There was, however, another element that was equally important but more mystifying than Subramanian’s appointment, and which has hogged the limelight ever since. The Sebi order mentioned the term “unknown person” nearly 240 times and, on a few occasions, based on Ramkrishna’s submission, stated the entity was a yogi or a spiritual being who “dwelt in the Himalayan ranges”. Now, spiritual babas and yogis are not uncommon in India, especially those who draw devotees from the political milieu. But this was perhaps the first time that an order from Sebi stated that a stock exchange honcho was allegedly sharing confidential information with a Himalayan yogi.

Ever since, public discourse of this “spiritual force” has effectively dwarfed the larger issue of how a scam or fraud of such magnitude was perpetrated at India’s biggest bourse—and the world’s largest derivatives exchange, which itself is a first-level regulator and is, at the same time, tightly regulated by Sebi.

Subramanian was brought on board at NSE in April 2013 and Sebi was, informally, well aware of his appointment. More importantly, the regulator received complaints in December 2015, but it was only in October and December 2019 that show-cause notices were issued to NSE, Ramkrishna, Subramanian and others. That was late. Ramkrishna had moved out of the exchange in December 2016, even getting monetary benefits of `1.54 crore for her “sterling contribution to the growth of the organisation” (although another component was retained by NSE), and Narain and Subramanian exited in June 2017 and October 2016, respectively.

Prior to joining NSE, Subramanian was working with a subsidiary of Kolkata-headquartered PSU Balmer Lawrie, where his annual package was less than Rs 15 lakh. Ramkrishna hired him at NSE in 2013 at Rs 1.68 crore, which zoomed to Rs 4.21 crore in 2016. By then, he had risen to the post of ‘Group Operating Officer and Advisor to MD’. His perks, entitlements and work terms—four days a week in office only, etc.—also showed that he enjoyed unusual privileges. While there are various theories about Ramkrishna’s equation with Subramanian, the fact is that his wife Sunitha Anand was a good friend of Ramkrishna’s. Interestingly, Sunitha, who worked at NSE’s Chennai office, also saw her compensation more than double from Rs 60 lakh in 2013 to Rs 1.34 crore in 2016. 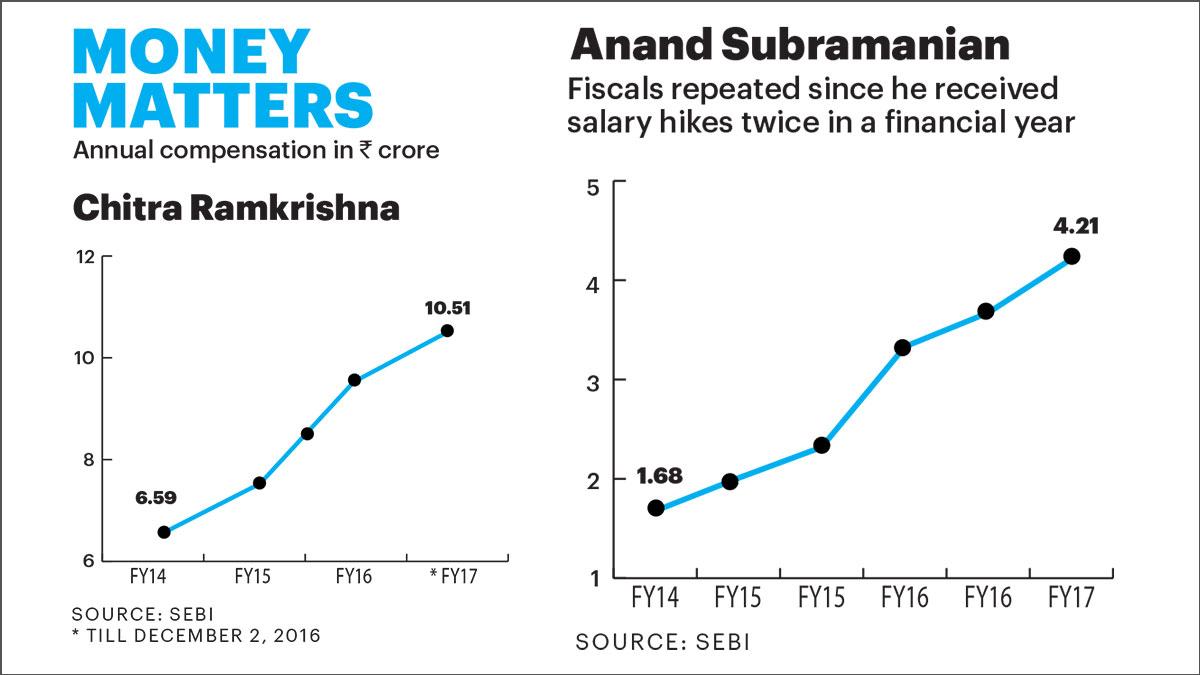 And what of the yogi? As per Sebi’s order, there are various email interactions between Ramkrishna and this yogi wherein information of all kinds have been exchanged, including “organisational structure, dividend scenario, financial results, human resources policy and related issues, response to regulator, etc.” Incidentally, a forensic audit report by consultancy major EY stated that Subramanian was himself the “unknown person”, but Sebi’s Whole-time Member Ananta Barua, who penned the order, wrote that the evidence on this count was inconclusive. Hence, the regulator went ahead with the “unknown person” theory.

“The Sebi order is inconclusive and does not bring anything to closure,” says Shriram Subramanian, Founder & Managing Director of InGovern, a proxy advisory firm. “Sebi found that confidential information was shared with outsiders, KMPs were appointed without due process being followed and the integrity of the exchange was compromised. Yet, the quantum of penalties imposed are ridiculously low for the gravity of the matter. Sebi has not achieved anything with this order as there is nothing to deter such wrongdoings in future.” Ramkrishna has been penalised Rs 3 crore while NSE, Narain and Subramanian have been docked Rs 2 crore each. NSE has also been directed to forfeit Rs 4.37 crore—a part of which was paid to Ramkrishna when she resigned.

Meanwhile, the recent past has seen various investigative agencies enter the fray with the Central Bureau of Investigation (CBI) questioning Ramkrishna, Subramanian and Sebi officials as well. Meanwhile, Income Tax officials have been conducting searches at places linked with the duo and also with Narain. On February 25, Subramanian was arrested by the CBI and sent to custody till March 6 in connection with a co-location scam that happened at the NSE in 2010-11. (Some brokers were allegedly given preferential access to NSE’s servers, to give them an advantage in trading.)

Industry veterans believe that more than the salacious details in the order, the callous attitude of the regulator will be long remembered—systemic issues, if not nipped, could lead to recurring scams, along with low corporate governance levels in regulated entities. They further add that the 190-page order of Sebi has actually been weakened by including many unnecessary details, hinting specifically towards some of the email exchanges between Ramkrishna and the “unknown person”.

“From a regulatory point of view, there are only two to three key aspects that need to be focussed on in this particular matter. Did [Ramkrishna] act in accordance with the law, rules, etc.? The answer is no. What was the consequence of her not acting in accordance with the rules? Any adverse impact on the exchange functions? And, if yes, then has it taken any corrective measures? What action should be taken?” says J.N. Gupta, Founder, Stakeholders Empowerment Services, and a former executive director of Sebi. “As far as the subject of the ‘unknown person’ is concerned, more than the advice giver, the person who acted on the advice is responsible. As regards his identity, it has to be a separate investigation and would be relevant only if the person was a powerful person not in the spiritual sense, but in reality.”

Many in the markets also feel that the Sebi order hints at favouritism, and that NSE has been given a long rope even as various wrongdoings, including the co-location scam, have been unearthed at the bourse. “With the NSE order, I now believe Sebi’s actions have been partisan, devastating and with a don’t-care attitude towards investors,” says Manish Kumar, Co-founder, Grex and RealX. Kumar had a long run-in with Sebi when he was trying to set up Grex as a start-up funding platform many moons ago.

“When I read about their orders in other cases, I see the same modus operandi—stop operations all of a sudden, and the entity will crumble automatically. This is unfair, autocratic and undemocratic, and must stop. Ironically, Sebi was created for investor protection, but in case after case we have seen that they simply issue stop or shutdown-like orders instead of focussing on correction and continuity, destroying enormous investor wealth on the way,” says Kumar.

An email sent to Sebi by Business Today remained unanswered till the time this article went to press.