News
Magazine
Current
The Economic Impact of the Russia-Ukraine Conflict

The Economic Impact of the Russia-Ukraine Conflict

The Russian invasion of Ukraine has already creaked the world’s economy, and has the potential to do more damage if it doesn’t end quickly

WAR ZONE: A Ukrainian police officer stands in front of a damaged residential block hit by a missile on February 25 in Kyiv

On February 24, when Russian forces launched a war on neighbour Ukraine, it actually escalated an eight-year stalemate that commenced with Russia reclaiming the Crimean Peninsula in March 2014 to undo what it describes as a Soviet-era in justice. As news of the Russian move trickled in, stock markets tanked globally and in India. Oil & gas, metals, telecom and realty indices were the worst hit on Indian exchanges.

Of particular concern is the possibility of crude oil touching the 2008 high of more than $140 a barrel (currently Brent crude is at around $100- plus levels). India is the third-largest importer of crude after China and the US; crude accounts for 20 per cent of the country’s total import bill.

India paid $82.4 billion for crude oil imports in the nine months through December 2021, a 108 per cent rise over $39.6 billion paid over the same period in 2020. “Currently, the Ukraine crisis and its implications for crude have emerged as a key risk for [India],” says Dharmakirti Joshi, Chief Economist, CRISIL Research. “It will bloat the current account deficit (CAD), trim GDP growth and push inflation up, and the quantum of impact will depend on how high crude prices go and for how long they stay elevated.” 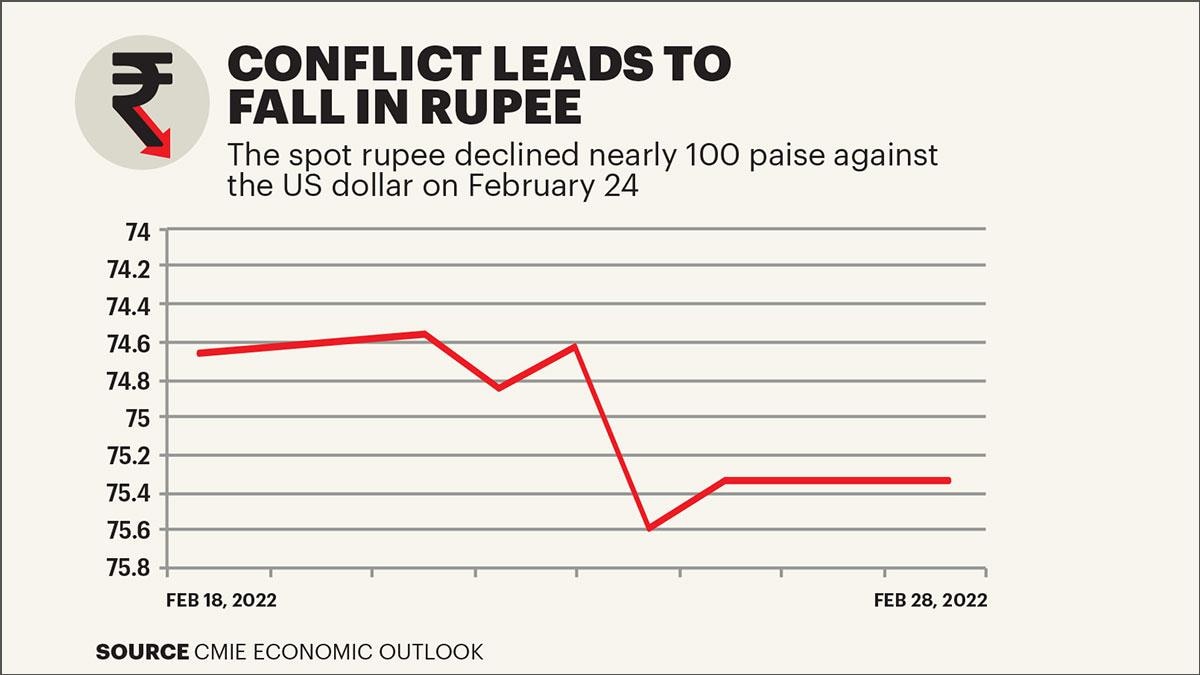 Economists say the main impact will be on CAD and inflation. “If crude imports average $100 a barrel through FY23, CAD could rise to 2.3- 2.5 per cent of GDP,” says Aditi Nayar, Chief Economist, ICRA. “The impact on inflation will depend on when and by how much retail selling prices [of fuel] are hiked, and whether excise duty is cut to absorb a portion of the pain.” Adds Madan Sabnavis, Chief Economist, Bank of Baroda: “We must remember that the government has desisted from any increase in retail prices of fuel products ostensibly due to the ongoing state elections, which was before the conflict ensued. There was a strong case for increasing rates even with there being no war-like situation.”

Strengthening crude oil prices may impact sectors such as aviation, paint, tyre and oil marketing companies, while oil exploration companies may get some benefit, as might export-oriented sectors such as IT and pharmaceuticals, since higher oil prices will put pressure on the currency.

Concerns emanating from the Russian military action immediately put the Indian markets on tenterhooks. “The world can ill-afford further disruption in trade and commodities when Covid-19 has already weakened sovereign balance sheets,” says Amar Ambani, Head of Institutional Equities, YES Securities. “We were already witnessing a consolidation since mid-October 2021 due to lack of fresh triggers. The Russia-Ukraine issue added a negative trigger to the existing overhang of the US Fed likely raising rates in March 2022.”

The geopolitical uncertainty coupled with the likely slowdown in the global economy and high inflation could lead to a major spike in gold prices, as central banks are left with limited legroom to raise interest rates. “We expect gold prices to shoot up and test levels of Rs 54,000-Rs 55,000 this year, and Rs 60,000-Rs 62,000 next year. So, on average, gold will go up at least by Rs 10,000 in the next two years,” says Kunal Shah, Head of Commodities Research at Nirmal Bang.
Another area that may be impacted is defence cooperation as Russia is India’s largest supplier of weapons. A 2021 working paper released by Stimson Center, a US-based non-profit think tank, revealed that over 80 per cent of equipment and platforms in service with the Indian military were of Russian origin. Day one of the conflict also witnessed 8 per cent of cryptocurrencies’ market capitalisation of $1.59 trillion being wiped out. Vikram Subburaj, CEO of Giottus Crypto Exchange, believes the current crisis presents an opportunity to invest in cryptocurrencies at a lower price. “While there is a possibility of further decline, the asset class is expected to absorb large volume buys beyond another 20 per cent drop. When the pandemic hit, we witnessed one of the biggest crashes in stocks and crypto. However, both assets recovered to new all-time highs in the next 18 months.”

Researchers at crypto exchange CoinDCX believe that while crypto has historically moved inversely to traditional markets, this trend of it mirroring the market sentiment could indicate that the asset class is maturing. Moreover, the freezing of a substantial part of the Russian central bank’s $630-billion foreign exchange reserve stockpiles overseas together with the country’s expulsion from the financial messaging service SWIFT could give a boost to cryptocurrencies. “Cryptocurrencies like Bitcoin may get stronger on the back of economic sanctions on Russia. This would lead to the US dollar further losing its position as a global tender,” defence expert and commentator, Group Captain August Maliakal, told Business Today.

Russia and Ukraine are both suppliers of raw materials used in semiconductor manufacturing. Russia is the leading producer of palladium, essential for memory and sensor chips. It also produces several other key raw materials for computer chips, including the rare-earth metal, scandium. And Ukraine is a leading exporter of highly purified neon gas that is used in etching circuit designs into silicon wafers to create chips. But experts are hopeful of minimal impact. “The semiconductor supply chain is largely in Asia and the US; so, it may not see a major impact in the short run except for the negative sentiment any war naturally fosters. A long-duration conflict and a widening of the war could, of course, have far more serious consequences,” says P.N. Sudarshan, Partner & Technology, Media and Telecommunications (TMT) Industry Leader, Deloitte India.

Meanwhile, the Indian automobile sector, the world’s fifth-largest, is keeping a close watch on the developments in Ukraine. “The industry was hoping to recover from the pandemic led demand suppression, as well as positive signs [were] visible on the semiconductor issue. This prevailing situation may lead to some adverse effects in the short term,” says Rajat Mahajan, Partner, Deloitte India. “It may increase commodity prices, especially in metals like copper, palladium (used in automotive exhaust systems) and others, leading to higher costs for the original equipment makers (OEMs).”

The Indian pharmaceutical industry is worried, too. According to the Pharmaceuticals Export Promotion Council of India (Pharmexcil), India exported over $181 million worth pharmaceutical goods to Ukraine in FY21, growing nearly 44 per cent over FY20, while exports to Russia were nearly $591 million in FY21, with YoY growth of 6.95 per cent. A majority of domestic players do business in both countries, including Dr. Reddy’s Laboratories and Sun Pharma.
“We have had a strong presence in the region for over three decades. Ensuring the well-being of our staff is the first and foremost priority, along with meeting patient needs and business continuity. We have been monitoring developments closely and preparing accordingly,” a spokesperson for Dr. Reddy’s told BT.

Exports of tea—incidentally called chai in both Russian and Ukrainian— may also face a challenge. Russia is one of the biggest importers of Indian tea with a share of 18 per cent in Indian tea exports. “The Russian market is crucial for Indian tea exports given the fact that Iran shipments continue to be plagued by payment issues, which have resulted in drastic fall in export volumes,” says Chinmoy Dhar, Secretary, India Tea Association.
There is some bad news for health-conscious Indians, as the country depends almost totally on Ukraine and Russia for sunflower oil imports. In 2020-21, India imported 1.9 million tonnes of crude sunflower oil, of which Ukraine accounted for 1.4 million tonnes. The rest came from Russia. Sudhakar Desai, president of the Indian Vegetable Oil Producers’ Association, says, “Currently, India has stocks that could last until end of March... An alternative solution is to divert supply from Argentina or other places to meet demand. We could also look at replacing sunflower oil with palm, mustard, soya oil, etc.”

In case Russia and Ukraine do not arrive at a resolution soon, there is a possibility of the conflict spilling beyond the region. And that would be bad news for businesses. But whether or not the conflict prolongs or ceases quickly, it might have fast-tracked a chain of events that redefines geopolitics for the long term in the 21st century.