The science of growth

Call it the six-year-itch. Set up in 2002 by GVK scion G.V. Sanjay Reddy, GVK Biosciences is now talking leadership and on ways to get there quickly.

Call it the six-year-itch. Set up in 2002 by GVK scion G.V. Sanjay Reddy, GVK Biosciences (GVK BIO in quick-speak) is now talking leadership and on ways to get there quickly. At the moment, it sees itself as one of the leading contract research organisations from Asia in terms of bandwidth of service offerings (from drug discovery and development to manufacturing), number of people (1,300) and revenues. 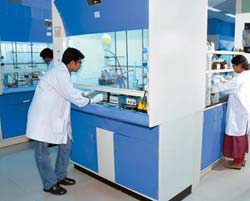 A Wyeth facility: Its a top client
It won’t share the revenue numbers (it enjoys the privatelyheld tag) but they should be substantial. Here’s why: GVK BIO has just crossed 100 clients and works for over 15 of the world’s 20 largest pharma companies.

Headed by D. S. Brar, former CEO of Ranbaxy,the company has attracted Rs 100 crore from leading private investment firm Sequoia Capital. GVK BIO is planning a capital expenditure of $50 million (Rs 215 crore) over the next three years. Recently, it got strategy guru Tarun Khanna to join its board. Khanna, as BT readers would know, is the Jorge Paulo Lemann Professor at the Harvard Business School, where he has been a member of the Strategy Group since 1993. “We have moved from a start-up stage into a sustained growth phase and are now looking at leadership. For this, we need to look long-term,’’ says Manni Kantipudi, President, GVK BIO.

Starting July this year, it has started work on building a strategy leading up to 2012. Kantipudi is hopeful of having the roadmap ready by October, in consultation with Khanna. “We were thinking year-to-year; now we need to think at least three years from now, and plan our budgets and resources accordingly,” says Kantipudi, who joined GVK in May last year after 15 years with Intel.

Of all its clients, its most-talked engagement is with Wyeth, with which it apparently has a $40-million deal. GVK BIO has a research agreement with Wyeth Pharmaceuticals, a division of Wyeth, to discover drug candidates focussed on pre-defined discovery targets. The company will be responsible for identifying drug candidates, which will be transferred to Wyeth to advance these compounds towards clinical studies. Under the agreement, GVK BIO will receive an initial payment and will be eligible for success-based milestone payments; the company has set up a “built-tosuit” research centre for Wyeth Pharmaceuticals in Hyderabad. Other than pharma and biotech companies, GVK offers services to universities and to scientific journals.

The company’s vision is twopronged. One, establish a leadership position in its core business area of discovery services; that’s apart from offering new and integrated services to emerge as a preferred supplier of contract services (of collaborative research and phase I clinical trials).