The recent hike of Rs 5 in the price of petrol means that at Rs 63.37 a litre in New Delhi, a car that returns a respectable 12 km to a litre of petrol has a running cost of over Rs 5 a km. With global crude prices on fire, there is no doubt that the oil marketing companies, as much as customers, are bleeding on the sale of petrol, partly because the government will not reduce taxes on the fuel.

More importanly, the reluctance of the government to increase the price of diesel has led to a strange situation - the demand for petrol cars is declining sharply. The argument that the common man will suffer if diesel prices are raised and hence only petrol should be made dearer is fallacious. There are at least 100 million motorcycle owners in India, a figure calculated on the basis of the last 15 years' sales. And despite four-stroke motorcycles in India offering incredible mileage, this price rise hurts users of bikes which have petrol engines a lot more than the middle class man driving the diesel-variant of the Maruti Swift. It is true food prices will be impacted if the diesel price goes up. It will also hurt small and medium scale manufacturing units which routinely use diesel to power their factories, thanks to the all-pervading power shortage. But that is another story. 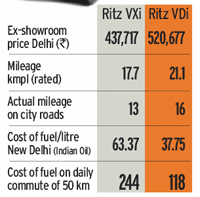 Click here to Enlarge
To stick to cars, let us consider the economics of owning a petrol car versus a diesel one. Let us take the Maruti-Suzuki Ritz models VXi and VDi as example. There is a on-road price difference of around Rs 1 lakh between the petrol and diesel variants. On the baseline of 1,000 km a month, a petrol Ritz owner would spend Rs 4,900 on fuel, whereas a diesel Ritz owner would spend Rs 2,400.

Will the new Hyundai Verna be a game changer?

This does not take into account the slightly higher cost of diesel spares, but then the higher initial outlay for the car will also reflect in a higher resale price, even though in percentage terms, a diesel car might lose more value. A petrol car is still cheaper and a majority of the most cost-effective small cars have efficient petrol engines. Buyers who can afford extra payment on a diesel car tend to be the ones who are better off. That is the reason there are voices arguing that a subsidy on diesel is effectively a subsidy for the class sporting a sports utility vehicle.

Diesel is becoming more attractive as a fuel across Europe too, thanks to the incredible economy of the next generation diesel engines. But in Europe, diesel is priced on par with petrol. Even though diesel is cleaner than ever before, petrol-engined cars still have superior performance, which is why there are no diesel-powered Ferraris or Lamborghinis.

In India, getting a delivery position on a diesel vehicle involves joining a long waitlist. For a petrol Ritz, most dealers will give delivery the day your loan is sanctioned. Buying a diesel Ritz means at least a month-long wait. The same is true for the diesel-run Hyundai i20, the Volkswagen Polo or the Nissan Micra.

Rising fuel prices will eventually pinch the wallets of all car and motorcycle drivers. But an absurd subsidy on diesel is skewing the Indian car market and creating a scenario where the government robs Peter, the owner of a petrol-driven 100 cc motorcycle, to pay Paul, who drives a massive SUV. Look at it any way you want, but it is just not fair.

'Waiting period will fall to one month'