Upstart KIA tore through the darkness surrounding the Indian auto industry to race towards the top, leaving more celebrated names rolling in the dust. Can it keep going?

Kia came out of nowhere to make a sizeable dent in the world’s toughest car market.

Super villain meerkat tries to woo car designer Johnny to become his inspiration for a new car, but Johnny remains singularly unimpressed. The puny yet spunky baddie then has to contend with actor Tiger Shroff to launch the car, but comes a cropper here too, as the actor turns out to be more of a badass than the villain. What’s the deal here? Well, Adventures of Meerkat was not just a fun comic video. It was, in fact, the India launch ‘vehicle’ for Kia, South Korea’s second-biggest carmaker after Hyundai (both are part of Hyundai Motor Group, or HMG).

Known globally for its edgy design sense, Kia instantly made an impact with the launch of the Seltos sports utility vehicle (SUV) in August 2019. At a time when India’s auto industry was facing its worst slump in decades, Seltos took the market by storm, outselling two of the most popular cars in the compact SUV segment—Hyundai Creta and Maruti Brezza. Backed by smart, quirky branding campaigns and the knowledge and resources of its cousin Hyundai, Kia India has reached in less than three years a position other celebrated global names have been unable to reach in decades—market share of almost 6 per cent, and No. 5 position in the Indian four-wheeler pecking order.

But as it moves forward, Kia needs to be ready for stiffer competition. Already, in FY22, its growth rate (in utility vehicle unit sales) has slowed to 19.9 per cent compared to 83.4 per cent in FY21. More tellingly, Kia was No. 3 in utility vehicle sales in FY21. But in FY22, it has been pushed down to No. 5 in the segment by old warriors Tata Motors and Mahindra & Mahindra, which have grown 161.6 per cent and 43.8 per cent, respectively. Even segment leader Maruti Suzuki has grown SUV sales faster than Kia in FY22, at 26.9 per cent.

Nonetheless, the story of how Kia came out of nowhere to make a sizeable dent in arguably the world’s toughest car market, is an impressive tale of how it smartly combined conventional wisdom with modern strategy and tools to concoct a winning formula. 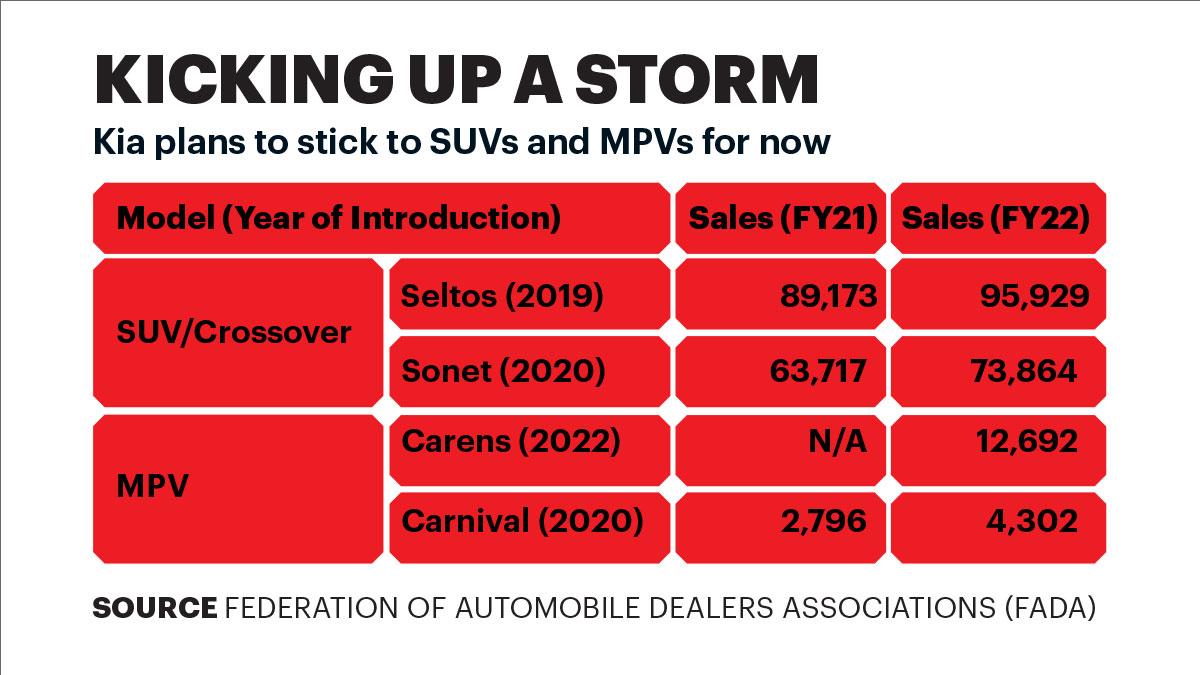 For starters, the Meerkat approach was strategic for Kia’s 25-45-year-old target group. Rahul Vengalil, Managing Partner of Isobar, a creative agency that managed Kia’s digital launch campaigns, says that for a young, upwardly mobile consumer, digital and social media platforms were key to build engagement and anticipation for the brand at a time when few Indians knew about it. “Meerkat worked really well to connect with young consumers. It had a 12.8 million-plus reach on Instagram alone. We created memorable experiences using it at the Auto Expo as well. People saw it as a cool brand,” he says.

What Kia also got right was the product strategy—enter the market in the most booming category of mid-sized SUVs—with Seltos. The fact that India was part of the global launch of Seltos seems to have also resonated well with customers. Now, with four UVs—Sonet, Seltos, Carens and Carnival—selling like hot cakes in India, the automaker has started a third shift in its Anantapur manufacturing plant and ended up producing 236,036 cars in the country in FY22.

Globally, Kia has some successful sedans and hatchbacks, but the company’s strategy for India is clear. “We call them recreational vehicles (SUVs and MPVs). We would like to stick to this segment and not venture into sedans and hatchbacks for the time being,” says Hardeep Singh Brar, Vice President and Head of Sales and Marketing at Kia India. The company did bring a hatchback—Rio—to India, but didn’t launch it. Brar says Kia’s product strategy has been accurate: “Not only in terms of design but also in terms of features and driveability, we were bang on. When we entered, our brand awareness was 1 per cent. Today it’s more than 95 per cent.”

MyungSik Sohn, Kia India’s Chief Sales Officer, says overall ownership experience is another thing that worked well. “Over the past two and a half years, we have introduced several industry-first initiatives such as the ‘Advanced Pick and Drop’ programme and ‘My Convenience’. These initiatives not only brought the maintenance cost of our vehicles down, but also provided a hassle-free ownership experience to our customers. The recent launch of Carens offers a maintenance cost of only 37 paise per km.”

And then there was Kia India’s network strategy. Says Sohn: “Since the beginning of our India operations, we have focussed on being accessible to all our customers across the country with the largest network for any new entrant, 265 touch points in 160 cities, adding to the convenience and confidence of customers. We have already expanded our network to 339 touch points primarily focussed on expansion in Tier IV and upcountry markets.” In CY2022, Kia India aims to penetrate the Indian market further with 400 touch points across 225 cities.

Partnerships are key for carmakers to survive in a tough market like India. For Kia, having Hyundai’s wealth of knowledge and understanding of the Indian market has been a godsend, besides having access to some resources as well. Kia was also able to ramp up its dealership network. The company had 150 dealers in the beginning that gave it coverage of 70-75 per cent of the market. That was crucial and one of the fastest ramp-ups for a new player. Sohn says the synergistic relationship with Hyundai helps Kia be more cost-effective: “We are a part of HMG and, therefore, it is obvious to have some commonalities at the back-end, but overall we are two separate entities with different strategies, objectives and target audience. The R&D unit of both the companies is the same, which means we are cost-effective when it comes to developing new technologies. However, how we package that technology is distinct in both the companies.” 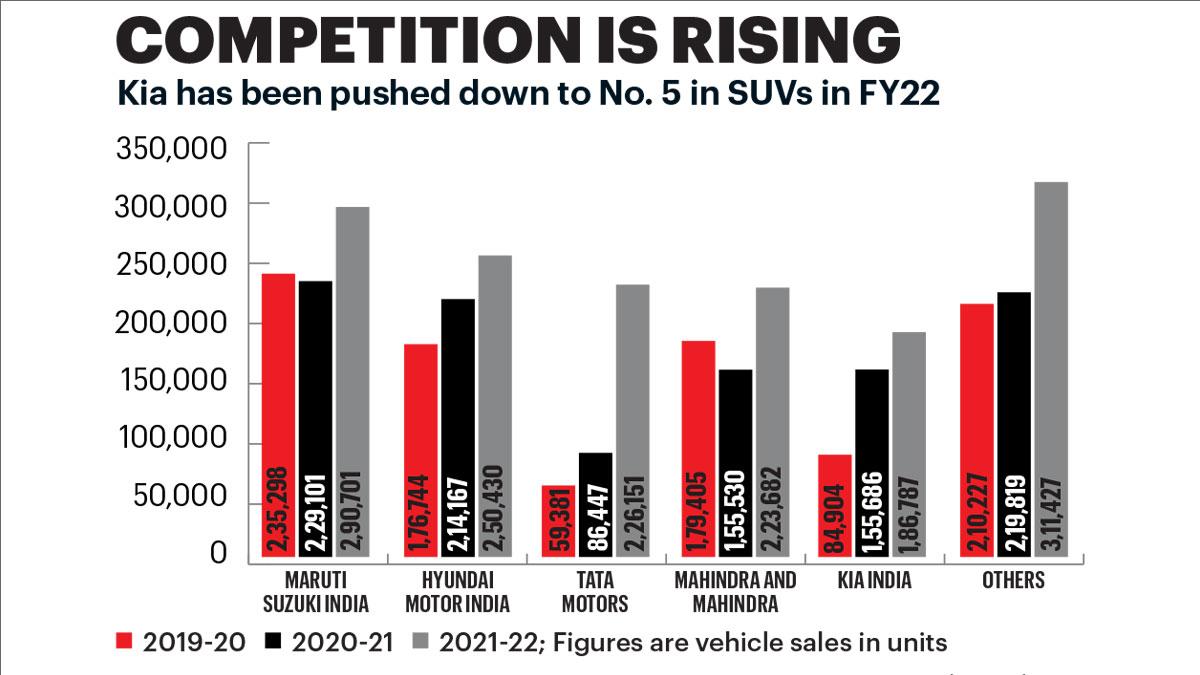 Had Hyundai not been around, would Kia still have succeeded as much in India? “It would have been very tough. Hyundai and Kia’s product platforms are the same, technologies are the same. Tooling and R&D helps lower the costs. This gave them economies of scale. Even though their brand positioning is different, Hyundai gave them the learning about what products work and what doesn’t work,” says Gaurav Vangaal, Country Lead for light vehicle production forecasting at IHS Markit.

One of the things that both Hyundai and Kia got right was the market dynamics. Hyundai entered in 1998 with Santro when the mass-market segment was growing, while Kia entered with Seltos when the Indian market was witnessing a surge in SUV sales. Kia has sold a total of 266,867 units of Seltos in the domestic market so far. The SUV accounts for 65 per cent of the company’s total vehicle sales in India.

Sohn says the reason for Kia’s success is the connectivity features in its cars: “Today’s internet-savvy generation has evolved connectivity needs, and they expect seamless connectivity even on the move. We drove the connected car revolution into India with a plethora of innovative, cutting-edge, connected solutions to satisfy our customers’ connectivity needs.” Kia’s cars come loaded with dozens of features including some segment-firsts like Apple CarPlay, wireless charging, sunroof, voice command, hill ascent assist, heads-up display, 360-degree-view parking camera, etc.

The company’s latest launch, Carens, has 60 connectivity features. “We’re looking at different degrees of autonomous as well, and taking care of the smallest details for the Indian market,” says Brar. Another thing that worked for the brand is its pricing, which helped it achieve the sales milestone of 500,000 dispatches from its Anantapur plant in less than three years. Kia Carens is priced at just Rs 8.99 lakh (introductory, ex-showroom) for a seven-seater MPV with SUV styling, while rival Hyundai Alcazar is priced north of `16 lakh.

Kia is also targeting India’s upwardly mobile base with an offering like Carnival, which costs upwards of Rs 30-40 lakh and will get more customers from the top metros. But it also wants to gain deeper penetration into smaller towns and cities. Kia’s top 10 markets contribute 45 per cent to its overall sales, but for a product like Carnival, they may contribute about 60 per cent. “Our top 50 towns is where there’s more demand, but as you go down in terms of pricing, the smaller markets start contributing even more. We want to make our products suitable to them as well,” says Brar. 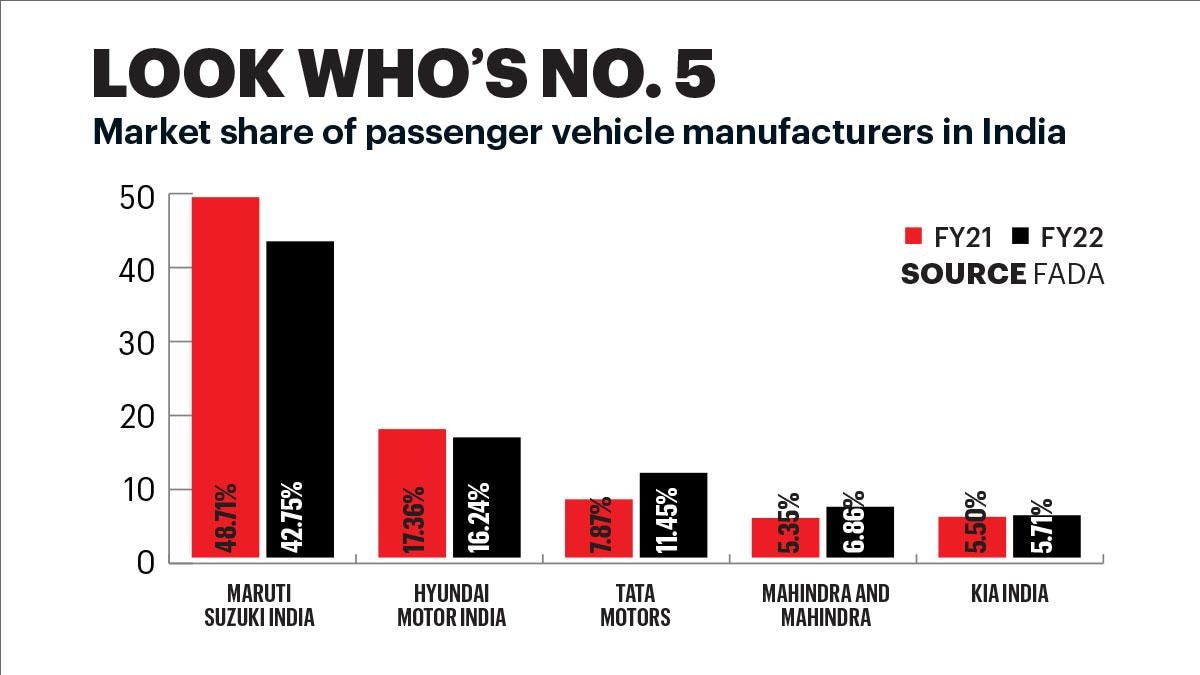 All these strategies have helped Kia India register a net profit of Rs 1,111 crore in FY21, following a loss of Rs 329 crore in the previous fiscal, according to the company’s filings with the Ministry of Corporate Affairs (MCA).

The company is now gearing up for its electric vehicle plans, with EV6 to be its first EV for India. Bookings will open on May 26, according to the Kia India website. “As and when they launch their EVs, they need to think about exporting them from India. It will work very well for the Indian consumer and will be a testament to the confidence that the Kia management globally has shown in the Indian market,” says Vangaal of IHS Markit. Kia already exports its cars to about 90 countries from India.

Brar’s next big challenge, apart from maintaining Kia’s growth momentum, is to focus more on localisation. It started at about 70 per cent but now it’s at more than 80 per cent. “To get it right in the first few years was difficult. Plus, our cost of maintenance is also low. This gave us an edge compared to some of the other players in the market. But localisation is a continuous process. It helps us move away from fluctuations in foreign exchange and gets our costing better,” says Brar. 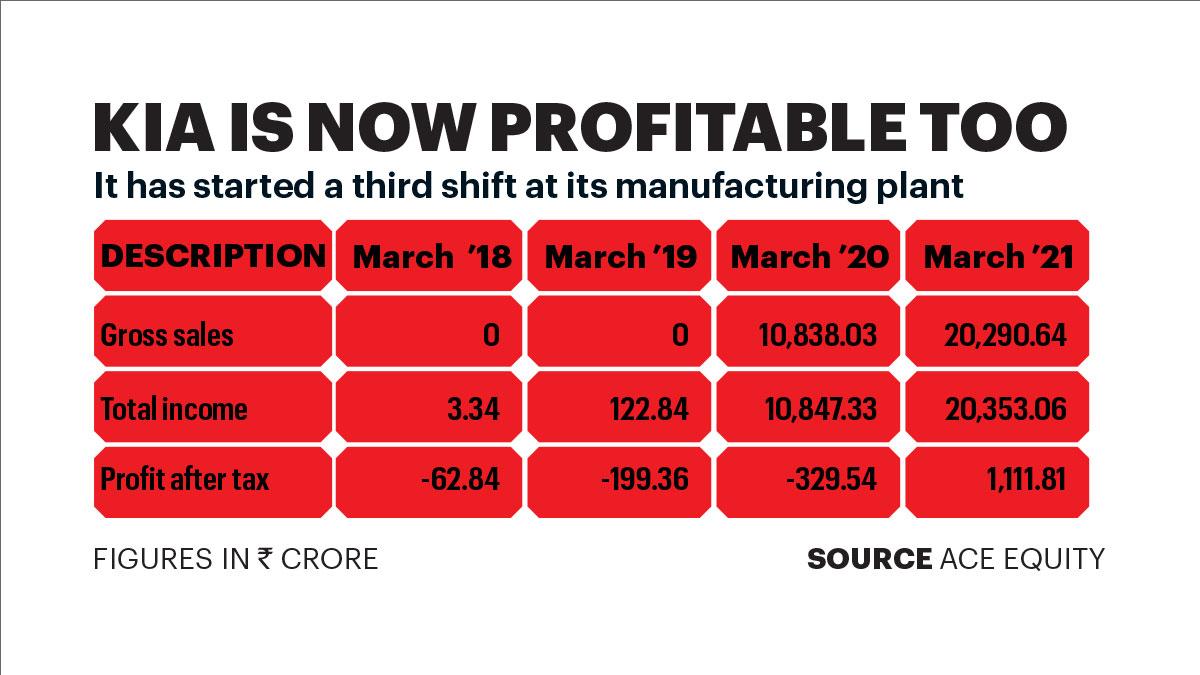 That said, the company, like other automakers, is struggling with supply-side issues, freight costs, the semiconductor crisis, rising fuel costs, etc. “Our new launches are on track, but yes, there have been disruptions. It doesn’t materialise on the kind of cars we want to make. We have definitely seen improvement over the past couple of months compared to six months ago,” says Brar. Kia’s waiting periods are at three to six months, depending on the variant.

In fiscal year 2021-22, Kia sold 186,787 cars, at an average of 15,500 per month. Going forward, Brar expects this number to touch 20,000 per month once supply-side challenges are dealt with. “Last year, we were 6 per cent of the Indian market. We’re looking at more than 7 per cent this year. We want to grow at about 25-30 per cent this year whereas the market is expected to grow at about 10 per cent. We want to outpace the market like we’ve done in the past,” says Brar. The company will also have to contend with stiffer competition, with rivals launching well-designed SUVs in quick time.

For Sohn, Kia’s success is already a case study for future entrants: “We carefully observed the need gap in the Indian market and understood that design should be our biggest USP to sell in India. Kia India is now a case study on entering and disrupting a market even when you are a late entrant.”