Renault brand to return in May with Fluence

Its once-prized Logan is now the Mahindra Verito, but the Renault brand will return in May with the Fluence, says Kushan Mitra.

Renault Fluence and Renault Koleos
Kushan Mitra
The Renault Logan was launched in India with much fanfare by Nissan - Renault Chief Executive Carlos Ghosn in 2007. Last year, the company fell out with its Indian joint venture partner Mahindra forfeiting the Logan as well. But Carlos Ghosn, Nissan-Renault's flamboyant Chief Executive, had tasted success in the Indian market and had no intention of leaving for good. Last year, Nissan started volume sales in India with the Micra while Renault will launch an executive sedan later in May, the Fluence, with a whole new sales and service network.

Meanwhile, Mahindra, which had retained the Logan, announced last week that it was re-branding the car as the Mahindra Verito. Logan's popularity as a budget sedan took a hit after the split and its sales have been weak in the face of fierce competition from the Tata Indigo and Maruti Swift Dzire.

"The Logan may not have been the most desirable or appropriate choice as the first Renault car in India," says Renault India Vice President Ashish Sinharoy. "However, that does not take away from its basic value proposition". It has seen huge success in many other markets around the world." He adds that the Logan suffered from perception problems primarily due to its plain looks.

Sinharoy says the company has learned from the Logan experience and the Fluence launch should hold it in good stead. The Fluence is a premium sedan that, according to Sinharoy, "straddles the D (Honda Civic, Toyota Corolla) and E (Honda Accord, Toyota Camry) segments".

The company also plans to launch the Koleos, a crossover sports-utility vehicle, later this year to take on the Hyundai Santa Fe and Toyota Fortuner. "Both the cars will be loaded with a host of premium features that are usually found in much more expensive cars," says Sinharoy.

But these are just appetisers for the main course which Renault India plans to serve in 2012 when it enters the mass-market small car segment, with a product based on the new V platform it shares with Nissan. In addition, the company will launch two other products in 2012 and aims to sell 100,000 cars in India by 2013 with over 70 dealerships.

Ambitious plans, but will customers continue to associate Renault with the staid Logan or look beyond to the fresh new products? That remains to be seen.

Honda cars
India may have cut production by 50 per cent to cope with a shortfall of parts from Japan, but so far it does not expect any adverse impact on the launch of its new small car, the Honda Brio. A spokesperson told BT, "The launch of the Honda Brio is still several months away. We are closely reviewing the Brio parts supply situation and will take a decision appropriately." 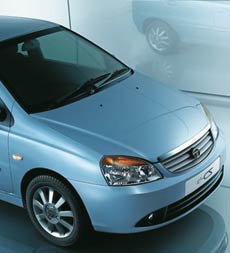 Hard drive boot failure
Cars in India cost close to 50 per cent more in taxes once excise duty, sales tax, octroi, road tax and cess are added up. This is why a Corolla Altis of similar specification costs Rs 12 lakh in India against $15,500 (Rs 6.82 lakh) in the United States. However, small cars have a preferential rate of excise at 10 per cent compared to the 22 per cent charged from buyers of larger cars.

This certainly impacts the entry-level sedan segment. Take the Maruti Swift Dzire for example, the VXi specification of the car costs Rs 5.47 lakh ex-showroom in New Delhi. A Maruti Swift, which is of similar specifications minus the trunk, costs Rs 4.63 lakh. The additional rate of excise adds Rs 30,000 to 50,000 to the price of a sedan, says Rajesh Jejurikar, Chief Executive, Automotive Division, Mahindra and Mahindra.

So how are carmakers beating the rule? By chopping the trunk on sedans. This trend was started by Tata Motors with the Indigo CS (compact sedan), and soon Maruti and Mahindra will come up with truncated versions of the Dzire and the Verito, respectively. So that carowners who like to show-off their station in life with a car can do so for a lot less, provided they are willing to do without a boot.