Greed is good, as Gordon Gecko said in "Wall Street", but how do you balance lavishly generous pay for people at the top of the corporate ladder, asks Business Today Editor Chaitanya Kalbag.

The day before this issue of Business Today hits news stands, America will vote for a new president. The day after you invest less than 80 US cents in our quality journalism (in the event that you paid its full cover price), the Chinese Communist Party will meet to anoint a new leadership. Both transitions will have global economic repercussions, the Chinese one more so.

If you happen to be in Beijing during the congress, you wouldn't be able to travel in a taxi with a handle on its rear window, or carry ping-pong balls in your pocket, or let your carrier pigeons out of their coops, or take your remote-controlled toy plane out for a joyride. All these are considered subversive activities.

If you lived in Singapore, you could cheer yourself up with front-page headlines on how the government intends to reward you for having more babies and also worries about whether the island republic can fit in a population of six million.

If you lived in India, of course, you could drive the wrong way on a one-way street, use (or abuse) social media, build and fly a radio-controlled plane - I just took a look at a how-to blog - spit out of taxi windows subversively, marvel at the endless shenanigans of our point-and-shoot politicians, or watch the fascinating stand-off between Finance Minister P. Chidambaram and Reserve Bank of India Governor Duvvuri Subbarao over interest rates. The minister seems to think that it is a growth versus inflation issue, while the central banker is clear that you can aim for growth, but with low inflation. Indians look set to suffer high single-digit inflation until at least the spring of 2013, when some people are betting we could have a new general election spurred on by the results of the Gujarat and Himachal Pradesh elections. Despite thinly-disguised pressure from the government, the RBI dug in its heels; read a clear-eyed analysis of the situation and in particular read Subbarao's interview with BT. 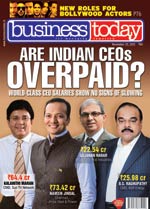 "Fiscal profligacy" is a phrase bandied about to explain India's rising deficit, something that Chidambaram hopes to nearly halve by 2016/17 (presumably, if the UPA is still in power) but what about corporate profligacy?

It is no secret that private-sector salaries in India have been rising inexorably over the past decade and a half, and nowhere was this more evident than in the software industry where 25 per cent pay rises were as common as 25 per cent staff turnover or "churn" as gleeful and greedy twenty somethings skipped from one job to another. Greed is good, as Gordon Gecko said in "Wall Street", but how do you balance lavishly generous pay for people at the top of the corporate ladder? Is sky-high CEO pay in line with sky-high shareholder returns, or are we giving the term "robber barons" a new twist? Our cover story, written by Senior Editor Shamni Pande with help from a team of colleagues whose eyes glazed over counting the zeros on CEO paychecks, starts with a revolt by institutional shareholders against the compensation for politician-businessman Naveen Jindal (who ironically also figured on the BT Best CEOs cover, February 5, 2012, for sustained high performance). Of course, Jindal had his way because the promoter shareholding far outstripped the institutions. But the thorny issue of how much is too much for a CEO in a country like India will not go away. Our story, based on a thorough survey by global human-resource consulting firm Aon Hewitt, also addresses the dilemma of fixed and variable pay. Too much variable pay, some feel, encourages extreme short-termism and a deceptive emphasis on share-price inflation at the cost of fundamentals. Infosys's Chairman Emeritus N.R. Narayana Murthy offers a wise - and wry - view, while ICICI Bank's HR head K. Ramkumar puts the debate in clear and crisp perspective. Where do you stand on CEO pay? Tell us.