Rates have been raised twice as Raghuram Rajan stands, somewhat like the mythical Dutch boy who stands with his finger in the dike, between his townspeople and the terrifying seawater beyond. Senior Editor Anand Adhikari writes about this grim struggle in our cover story. 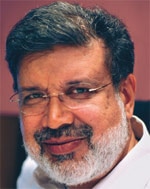 Chaitanya Kalbag
When I stepped into this role in mid-2010, it seemed India was unstoppable. Gross Domestic Product growth had averaged 8.5 per cent since 2004, when the United Progressive Alliance won power. The financial markets in the United States and Europe were in disarray after the US sub-prime crisis laid down a napalm attack that wiped out hundreds of billions of dollars in savings and brought the banking system to its knees. India, however, was immune. One year after the UPA won a comfortable second term, India seemed immutable.

The same year, Raghuram Rajan published his unswerving look at 'How Hidden Fractures Still Threaten The World Economy'. In the introduction to Fault Lines, he wrote about the run-up to the meltdown: "Critics were often written off as Cassandras or 'permabears': predict a downturn long enough, the thinking went, and you would eventually be proved right, much as a broken clock is correct twice a day." Rajan was famous as the economist who had predicted the Great Recession. Three years later, he is the Governor of the Reserve Bank of India, staring at a dysfunctional Indian economy that turned in growth of just 4.4 per cent in the April-June quarter. Rates have been raised twice as he stands, somewhat like the mythical Dutch boy who stands with his finger in the dike, between his townspeople and the terrifying seawater beyond. Senior Editor Anand Adhikari writes about this grim struggle in our cover story.

Can our brilliant economists and managers not draw a clear map out of the swamp of project gridlock, investment paralysis, corruption and crony capitalism? Scenarios abound, but if we do not carry out drastic second-generation reforms we will be condemned, like Trishanku, to languish in a make-believe paradise of low- to middle-income mediocrity. Read my analysis of what needs to be done.

Over the past three and one-third years, we at Business Today have put down several markers in our quest to spot trends and see around corners. We captured fascinating stories about Gen Y's unself-conscious invasion of corporate India (Sept 19, 2010), and The Economist took note of us. We wrote feelingly about sexual harassment in the workplace (Oct 17, 2010). Our Feb 20, 2011 cover India Slowing seemed counter-intuitive as Indian CEOs partied in Davos at the World Economic Forum, but we were spot on: the slide had begun. The dismal corkscrew descent was forecast in several subsequent issues. We analysed India's skilling crisis dispassionately (April 3, 2011 and then again March 31, 2013). BT has chronicled the scams (May 26, 2013 and Sept 2, 2012) as well as the good-news stories on start-ups (Feb 3, 2013 and Sept 30, 2012). And let's not forget our stunningly prescient Missing Murthy cover (Feb 17, 2013) which foretold the dramatic goings-on at Infosys four months later.

Several path-breaking things have happened as Business Today added about 100,000 readers, rose to among the country's top ten English magazines, and won a few journalism awards. 'Adding value' has become a life-and-death priority for us. From being a respected fortnightly, we are now a highly respected 'daily' with our writers whipping out perspective and reportage 24x7. Our website has become a go-to destination for personal technology, finance, business and economy news. In October www.businesstoday.in drew 3.3 million unique page-views and 1.95 million unique visitors. We are ready and raring to go forth into the wild digital yonder.

Our quarterly Business Confidence Index, launched in May 2011, has become a bellwether indicator of how Indian companies view the future. We have also been true to our "for managing tomorrow" credo by publishing a great series of case studies, both our own as well as by the London Business School. More recently we launched a monthly B-school Debate that promises to be a magnet for management students. And over the past five months, as testament to our reputation and cachet, more than 60 of India's top CEOs have gathered with us at exclusive breakfasts and lunches in Delhi, Bangalore, Hyderabad, Mumbai and Chennai to debate important issues.

Throughout all this, Business Today has striven to be a sober, sane and ethical voice, to be heard quietly amid the bedlam, and to offer you true insight, which I define as "connecting the dots you cannot even see". As I set off to explore new horizons, I hope we at BT have also not been true to T.S. Eliot's words in The Love Song of J. Alfred Prufrock:

No! I am not Prince Hamlet, nor was meant to be;
Am an attendant lord, one that will do
To swell a progress, start a scene or two,
Advise the prince; no doubt, an easy tool,
Deferential, glad to be of use,
Politic, cautious, and meticulous;
Full of high sentence, but a bit obtuse;
At times, indeed, almost ridiculous -
Almost, at times, the Fool.