While Budgets can be really bad, no Budget in the past two decades has succeeded in being so good that it lifts the spirit of everyone uniformly.

Immediately after the Budget, many friends and acquaintances ask me if I consider it to be good or bad. My answer generally is: it largely depends on who you are. For example, if you were a farmer or rural worker suffering acute distress because of two years of bad rains and a huge debt, some parts of the current Budget would definitely delight you. If you were a small taxpayer looking to build your first small house, you would also find some cheer in the Budget. Ditto if you were a cement or steel manufacturer. Cement and steel companies would also have things to cheer about, given the focus on infrastructure development. Construction firms specialising in roads would also see good business prospects.

On the other hand, if you are part of the auto industry, and especially a maker of diesel vehicles, the surcharges and cess introduced by the finance minister would be unlikely to make you happy. For the average middle-class consumer too, most prices will go up quite a bit because of various cesses introduced, while there has been no relief in terms of income tax slabs and other savings. In fact, the new tax proposed on withdrawal of PF would make you very upset.

If you are an economist worried about the government's profligacy, the commitment to stick to the fiscal deficit target would cheer you up - until you realised that next year, the finance minister wants a range to play around with, not a single fiscal number as the target. 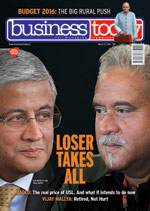 So much depends on what you were looking for or hoping for in the Budget. While Budgets can be really bad, no Budget in the past two decades has succeeded in being so good that it lifts the spirit of everyone uniformly. In the Budget package of BT, and its companion, Money Today, you will see how the proposals affect different segments of the populace and different sectors of the economy.

Meanwhile, the big corporate news in the past month was the resignation of Vijay Mallya as chairman of United Spirits Ltd. The flamboyant businessman had lost management control of the company he built into India's biggest liquor empire to Diageo sometime ago. But he had tenaciously held on to the chairman's position despite the board's efforts to dislodge him. Now Diageo has paid him a pretty penny - $75 million - to finally leave the company. With this, Diageo hopes to get complete control of United Spirits and shed the tag of having a chairman who was considered a defaulter by multiple banks.

However, all the troubles for both may not be over. For one, Diageo finally ended up paying two times or more than what it had originally agreed upon to get final control of the company. And it still needs to answer questions about the payout it has promised Mallya. More importantly, it has lost market share in the past three years, and now needs to fight rivals who have snared these.

Mallya himself can't claim all his troubles are over - State Bank of India wants its hands on the $75 million Diageo is paying him, because of the loans it had given to Mallya's defunct airline Kingfisher.

In our cover story, Deputy Editor Venkatesha Babu explores the real cost of USL to Diageo and the task it has in hand now in restoring its reputation and market share. And also chronicles the rise and fall of Vijay Mallya, who inherited a clutch of liquor and FMCG companies at the age of 28, started many new businesses, and was once riding high as a billionaire with a flashy lifestyle until he decided to set up an airline on his son's 18th birthday.