You might have noticed that in the past few months, the news coming out of India's $17-billion e-commerce sector has been decidedly mixed.

You might have noticed that in the past few months, the news coming out of India's $17-billion e-commerce sector has been decidedly mixed. While there are reports of new rounds of money being raised at higher valuations and new unicorns being created - ShopClues was the latest one to achieve that distinction in January 2016 - it has often been drowned out by news of sackings in the e-commerce sector, ugly spats between founders and their investors, closures of companies in the food tech and grocery space, and others. Recently, a Morgan Stanley mutual fund wrote down the valuation of its investment in the poster boy of India's e-commerce sector, Flipkart.

For some time now, a degree of realism has been also creeping into the Silicon Valley, which most high-profile start-ups in India consider to be their spiritual home. A record number of listed and unlisted unicorn start-ups - Box, Dropbox, Zynga, Twitter and even the big daddy of the Chinese e-commerce sector, Alibaba.com - have seen their valuations getting slashed. Even investors with plenty of money now want to see the path to profitability, and the milestones to be achieved operationally - and not just growth and expansion at the expense of everything.

Old-timers often say that this e-commerce boom is headed for a bust just as the original dotcom bubble did in the year 2000/01. In doing so, they ignore a few facts, though. Unlike the last dotcom bubble, the e-commerce revolution this time has a more complete ecosystem. There is a way to pay online. The delivery mechanism and other logistic issues are very robust. The number of people who buy and transact on mobiles and on the PC is increasing exponentially. Many of the current players have reached significant size in terms of revenues, and they have proper business models - unlike in the past when dotcom entrepreneurs were only chasing eyeballs and revenue model was not something anyone bothered about. 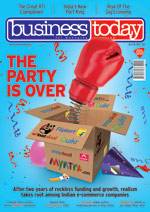 At the same time, there are some similarities. Valuations have hit the roof even for companies with enormous accumulated losses. At some point last year, any 20-something engineer from a premier institute could walk up to an investor and raise money even with a me-too idea or just a copycat app. And nearly a hundred thousand start-ups have been set up in the e-commerce space in just a few years. Worst of all, the government was beginning to get interested in the start-up ecosystem - and typically the government recognises a new industry just when it has peaked.

Thus, the e-commerce boom this time is not exactly similar to the dotcom bubble of 1998/99. Yes, there are plenty of companies that are peddling me-too models, have been funded without much scrutiny and are burning through cash too quickly. And they will probably start shutting down or get taken over. On the other hand, there will be at least one leader in each field who survives and flourishes - because he has built a sustainable business model and has robust systems in place. The e-commerce boom will continue even if the valuation bubble bursts. Senior Editor Goutam Das analyses the current state of the Indian e-commerce sector in the cover story this issue.

Meanwhile, the Tata Group has decided not to invest any further in Tata Steel Europe (formerly Corus). It is ready to sell a part or whole of the company. Corus was a trophy buy for the group at a time when the world economy was booming, steel prices were at a record high, and financing was cheap. But now, the sector is plagued with overcapacity in every country, China is dumping cheap steel in all markets as its own demand slows, and the European steel companies no longer seem worth the trouble to turn around given that the European demand itself is so low. The decision to sell Corus I think is a good one - it makes no sense to carry on with a trophy purchase that has turned sour only for the sake of ego. Another sign that Indian business houses are becoming more realistic.