The chips are up

After a false start in 2006, India is taking another shot at chip manufacturing. This time it could succeed. 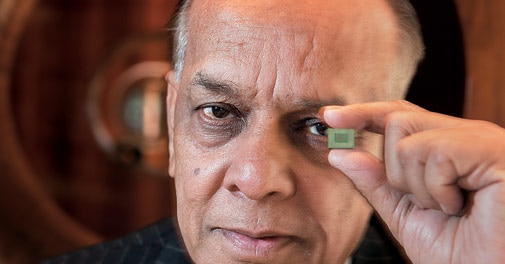 The fanfare and optimism of 2006 was striking. Almost anybody who was somebody in the Indian semiconductor industry threw his weight behind SemIndia, a company formed in the US by Non Resident Indians (NRIs). The promoters tried to put together a consortium that would back India's first serious effort at chip manufacturing - the proposed plant in Hyderabad would cost $3 billion and the chips would feed Indian electronic products which the country's growing middle class was lapping up at a fast clip. Chipmaker AMD offered to transfer technology to SemIndia. Component suppliers and investors also lined up.

And then, within two years, everything collapsed - the government incentives offered then were too little for a project this big. By 2009, the founding team led by CEO Vinod Agarwal exited SemIndia and the company shelved its fab dreams.

After eight years, another chip story is being scripted in India. Only this time the chances of success look brighter. This year's Valentine's Day was one two companies will not forget in a hurry. On February 14, the Union Cabinet approved two semiconductor manufacturing facilities. These ventures will be led separately by Jaiprakash Associates and Hindustan Semiconductor Manufacturing Company (HSMC). Cumulatively, the companies propose to pump in more than Rs 63,000 crore - one of the biggest investment announcements so far in the domestic manufacturing sector. Building a chip plant can cost between $3 billion and $5 billion depending on the technology used.

Another group of NRIs supporting India's chip manufacturing initiative, has also emerged. In his mid-60s, Devendra Verma is a US -based venture capitalist (VC) and entrepreneur. He is the founding General Partner of Edgewood and Redwood Ventures and as a VC has invested in over 80 companies. He is Co-founder, Chairman and CEO of HSMC. Verma has been hopping from one meet to another like a 20-yearold entrepreneur doing his first startup. "I have more energy that both of you," he told this reporter and the photographer when Business Today met him at a New Delhi hotel. Wolfing mini-samosas dipped in mint chutney, he explains why India stands a better chance of success now than in 2006.

The domestic market, to begin with, has changed. There is a proliferation of electronic gadgets, from tablets and set-top boxes to personal medical devices and automotive applications. The overall electronics product market in India was around $39 billion in 2010. It has grown to $51 billion in 2013 and is expected to touch $65 billion by 2015, according to a study by semiconductor industry lobby India Electronics and Semiconductor Association (IESA) and business consulting firm Frost and Sullivan. All these products need chips to run and India has been importing all of it. The government's support, critical to chip manufacturing considering it is a capital expenditure business, has also jumped manifold. "What was missing earlier was the government's involvement. That has improved a lot in the last couple of years. We saw an aggressive energy, there is awareness and that has resulted in the semiconductor manufacturing approvals," Verma says.

Apart from a basket of incentives the government has agreed to dole out, chip manufacturers are also likely to benefit from India's Preferential Market Access (PMA) policy, which mandates domestic sourcing for some products. "Our chips can be used at least for government products that are manufactured in India," says Verma. The government is worried about the country's huge electronics import bill - according to the Ministry of Commere, India's electronic goods imports stood at over $31 billion in 2012/2013. The government has also realised that IT hardware is now becoming central to almost all manufacturing, says Ajay Shankar, Member Secretary of the National Manufacturing Competitiveness Council (NMCC). "In the last 20 years, there has been a decline in domestic value addition. That needs to be reversed. The hardware electronics industry is also labour intensive. Therefore, in theory, it should be possible for India," he adds.

An industry executive, who did not want to be identified, points out that SemIndia failed mainly because of government flip-flops. SemIndia did receive initial encouragement from Dayanidhi Maran, the minister for Communications and Information Technology in 2006. "Things changed dramatically for the worse after Andimuthu Raja took over the ministry's reins from May 2007," the veteran said.

The subsequent financial meltdown after the collapse of Lehman Brothers in 2008 also played a part in keeping investors away from the chip manufacturing sector. This is no longer a problem in a recovering global economy, observers say. Verma says HSMC's fab (chip fabrication unit) will be financed by mostly multinational financial institutions. Jaiprakash Associates will also raise debt from banks. Yajulu Medury, the COO of Education at Jaiprakash Associates, who is involved with the fab project, does not see a problem in achieving financial closure.

However, there are sceptics galore who think that even if financial closure is possible, making the plants run profitably is a difficult task. "Very few fabs at this point in time are making margins across the world. There is stiff competition given the way the prices of chips are declining. The situation has probably worsened in terms of financial viability , " says Ganesh Ramamoorthy, Research Director at technology advisory Gartner. The semiconductor business is cyclical and profitability can be difficult to sustain largely because of high fixed costs - fabs need to continuously invest in technology equipment and corresponding depreciation expenses are typically high. The Semiconductor Manufacturing International Corporation, one of the most advanced foundry in mainland China, reported a profit of only $23 million in 2012 on sales of $1.7 billion. In 2011, it reported a loss. Similarly, Taiwan's UMC made a profit of only $107 million on revenues of $4 billion in 2012, a profit margin of less than 3 per cent.

Industry observers are also sceptical about the cost competitiveness of the made-in-India chip. What stops a local product company from being seduced by a lower priced chip from Taiwan?

Verma of HSMC vouches India can do well. The India chip can be reasonably priced because design costs will be cheaper than other Asian countries while manufacturing expenses remain the same everywhere - all foundries in Asia import equipment and material from other countries. "The labour costs in India are the same or lower than China. The talent here is better than China, especially in design. We can design the chips at a much cheaper rate than anybody else," Verma explains. "The cost of a fab technician would be $25,000 to $30,000 a year in Singapore. Indian salaries would be one-eighth," he adds.

These are early days but Verma says he has assembled a crack team who can not only build the fab but also get the business. But rolling out the first chip can take anywhere between 24 and 36 months. And then there is this long road to profitability. "The break even period for a fab with the current incentive structure could be seven to 10 years," says Medury of Jaiprakash Associates. The company expects to start building the fab in January-February next year. Industry watchers and investors alike have a long wait at hand.