Some of India's best CEOs shared leadership lessons with an eager audience of their peers at BT MindRush. 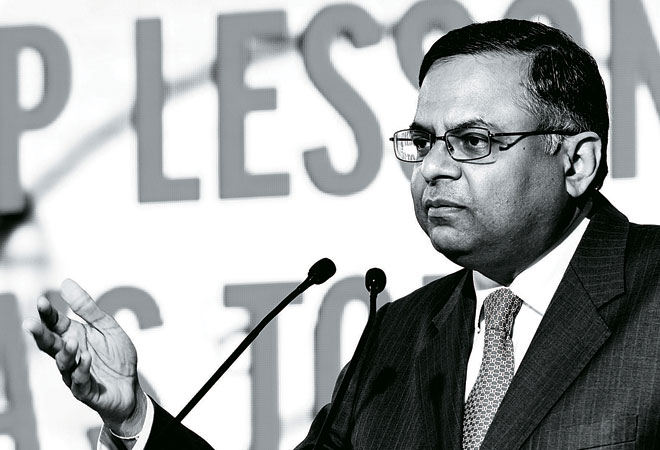 It was a power-packed gathering of business honchos at B T MindRush. And some of India's best known CEOs took the stage to share their mantras for success with the audience.

Leading from the front was Tata Consultancy Services (TCS) CEO and MD N. Chandrasekaran. He spoke about how TCS, India's largest software services exporter, got to the top and, more importantly, planned to stay there. Chandrasekaran pointed out that during good times, most businesses tend to press the growth accelerator, even at the cost of efficiency, which comes back to haunt them when the going gets tough.

TCS, on the other hand, decided to take an unconventional route.

Chandrasekaran said that, in 2008/09, during the global financial crisis, the company was split into smaller units, decision making was decentralised and the management travelled across the globe to hear from customers. It identified the mobile (tablet) revolution early on, invested in technologies and adapted it.

Nobody takes anything for granted," he said, responding to a question on how the company planned to stay on top. Indeed, being paranoid, decentralising decision making and identifying opportunities and threats ahead of the curve seems to have clearly worked for the IT major.

"Knowledge, patience, sharing of risks are critical in a research-driven pharmaceutical company"

Glenn Saldanha, Chairman and Managing Director of Glenmark Pharmaceuticals, one of India's chronicled achievers in the pharmaceutical industry, pointed out that in the 14 years he has been running the company, revenues had risen from $31 million to $1 billion last year. Its market capitalisation, too, had soared. At the time of its IPO in 2000, the market value was $40 million. Today, it is about $3.5 billion. The company has diversified under Saldanha. When he took over, 99 per cent of the company's revenue came from India. Glenmark now gets 75 per cent of its revenue from the international markets.

Saldanha underscored that he succeeded because he created an "organisational culture of innovation". While Indian pharmaceutical industry's success in the global generic-drug business is well known, Glenmark is one of the few companies that is investing heavily into basic research. It already has six molecules under various stages of development.

"Knowledge, patience, sharing of risks are critical in a research-driven pharmaceutical company," said Saldanha. It might take anywhere between 15 and 20 years for a single molecule to receive marketing approval, he pointed out, adding that companies should have the patience to nurture innovation. An entrepreneurial environment was crucial to nurturing innovation, he added.

In financial services, Housing Development Finance Corporation (HDFC) has been a company that has delivered outstanding performance in the last decade or so and has been a darling of the markets. Keki Mistry, Vice Chairman and CEO of India's largest mortgage lender, shared his leadership lessons and said that ethics, integrity, governance and focus on customer were the keys to success.

Mistry has been associated with HDFC for 33 of its 37 years of existence and has played a large role in helping the company emerge as India's leading player in its sector. If today HDFC has one of the best mortgage portfolios, it was mainly due to the systems and practices put in place over the years, added Mistry. "Even the layout of our offices are determined by customer needs and preferences," he said. Relentless focus on customer preferences had shaped the company, according to him.

Also read: You can always improve your cognitive skills, abilities

Another entrepreneur who has faced the test of adversity during the recent downturn, and has emerged stronger from that experience, is Grandhi Mallikarjuna Rao, Founder and Chairman of GMR Group. The group builds and runs airports, roads and power projects. "Before opening up of the economy, we started and exited 28 businesses. After economic reforms we went into a strategic mode and focused on infrastructure," said Rao. He highlighted how he overcame challenges to build New Delhi's modern airport."The Delhi airport project was very complex as it involved coordinating with 58 different government departments."

The group took over the airport when it was ranked among the worst in the world, said Rao. "Even the toilets were not functioning. We worked with 16 different consultants to build a world-class airport." Never getting emotionally attached to any asset and having self-belief during tough times was the message Rao conveyed to his audience.

Black money has been a bug bear of the Indian economy and a hotly debated political topic of the day. A leader of the banking industry, Naina Lal Kidwai, Chairman of HSBC India, felt that implementation of an effective and transparent tax system, in particular the Goods and Services Tax, would help in curbing this menace.

"You are dealing with a customer who knows more than you. The ability to shop interest rates and loan products is far greater," Kidwai said, indicating that technology was playing a key role in not just reaching out to customers but also in how customers dealt with banks.

You can always improve your cognitive skills, abilities