Can Tata put India on wheels?

Ratan Tata has changed the game in car manufacturing by producing the world’s most affordable car. Now he’s got to make it a money-spinner.

I will build a car for the great multitude. It will be large enough for the family, but small enough for the individual to run and care for. It will be constructed of the best materials, by the best men to be hired, after the simplest designs that modern engineering can devise. But it will be low in price...

Amidst all the hype surrounding the launch of the world’s cheapest car last fortnight, it’s tempting to believe that it was Ratan Tata who mouthed these words around the time he conceived the Nano, some six years ago. But the original vision for an affordable car for the working class man and his family belongs to Henry Ford, who launched the Ford Model T in the US in the early 1900s. It became a commercial success, put America on wheels and went on to become the first world car.

A century later, the Chairman of Tata Motors and the Tata Group has brought his own vision—not too dissimilar from Ford’s—to fruition. He’s flagged off the world’s cheapest car. He’s brought it within reach of Indians who couldn’t dream of owning a four-wheeler—currently only eight in a thousand Indians own a car. But that’s just one part of what Ford achieved. Just like Ford did for the Model T, Tata’s now got to make the Nano a moneyspinner. To do that he’s got to sell it to at least 2 million customers— most of them in India (urban, semiurban and rural), and quite a few of them around the world, including the developed world.

Ratan Tata
“We have met most of the goals we had set out with. We are providing a new form of transportation to India and, later, to other parts of the world,” Tata said last fortnight, a few hours before officially unveiling the car to the world.

Tata’s passion for the Nano extended beyond Bombay House (the Tata headquarters) right to the test tracks of Tata Motors’ Pimpri (near Pune) factory. If the Nano is a peppy car, thank Tata. For it was the Chairman who, after driving a Nano prototype, asked his team to soup up the engine to add a little more pep. Result? A 623cc engine that delivers almost as much power as the Maruti 800, India’s smallest car till the Nano arrived.

The teams working on the engineering and design of the Nano aver that almost everything about the car has Tata’s signature on it, right from the external styling to the interiors. Tata would routinely question virtually every single decision about the car in the development phase. He would testdrive the prototypes every other month on the test tracks of the Pimpri factory and come back with inputs (Tata always drives in the 40-60 km/hr band, even on test tracks, reveal engineers who worked with him). That is why when you push back the driver seat in a Nano—even if you are a tall man—you feel you have much more than adequate space.

The Nano—which Tata Motors claims to be 21 per cent more spacious than the current smallest car in the Indian market—on its own is doubtless a wonder machine. But alas, it is just a cog in a larger organisation called Tata Motors, which also makes commercial vehicles and other cars —segments that are in the throes of a recession. The company crashed into the red to the tune of Rs 263.2 crore in the Decemberended quarter—its largest ever months ended March won’t be better by much. To compound a grim picture, the two premium international car brands that it picked up last year for $2.3 billion (Rs 11,500 crore at current rates), Jaguar and Land Rover, are proving to be millstones in a recessionary market. 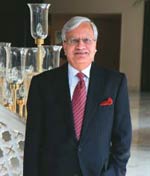 Ravi Kant
Against such a dismal setting, what can the Nano do? Virtually nothing for the next couple of years. Brokerage and financial services company BRICS Securities estimates that around 41,000 cars will be sold in the financial year 2009-10; this will constitute just 2 per cent of Tata Motors’ total revenues. The car is expected to recover its costs—Rs 2,000 crore and counting—only when 2 million units have been sold. That itself could take eight years, says Chetan Vora, Research Analyst at BRICS Securities. “The project will generate net profits only when production hits 5 lakh cars a year,” he adds.

It’s clearly a high-volume, lowmargin game. Analysts estimate a 10 per cent operating margin on each Nano sold. And break-even will take its time. Ravi Kant, Managing Director, Tata Motors, estimates that 50 per cent of production—of a total half a million that the company hopes to produce in two phases at the Sanand plant in Gujarat—will be of the Rs 1 lakh car. But according to Kant, it’s not the Rs 1 lakh (and a little more after it hits the road) price tag that makes the Nano a people’s car. “It’s a people’s car because you can book a Nano with just Rs 2,999. Banks will lend you the rest,” says Kant.

Whilst sceptics dismiss that as a gimmick—it’s still the car with the heftiest booking amount, never mind its total price tag, they smirk —fact is that Tata Motors’ engineers have burnt years of midnight oil to make the car cheap. The Nano has features that no other car has in India. For instance, a rear engine makes the front of the car so light that steering becomes a dream—especially round tough corners. The team has used conventional material for the car— metal has not been replaced by plastic. But thinner grades have been used with ribbed structures for strength.

The Nano may have little to contribute to the top line in the near term, but it could help it sort out some cash flow issues—for 2008-09, operational cash flows are negative to the tune of a little under Rs 2,000 crore. Deepak Jain, Research Analyst, Edelweiss Capital, estimates that the company will be able to raise as much as Rs 1,450 crore through the booking process. Of this, more than Rs 900 crore will be almost an interest-free deposit till the cars are ready.

But such flows may seem like dribbles when you consider the big hole that Jaguar-Land Rover is in. Tata Motors will be duty-bound to fill up an estimated $700 million (Rs 3,500 crore) deficit likely to be emerging in the pension funds: There’s also a $2 billion (Rs 10,000 crore) bridge loan taken for the buyout that comes up for renewal in June. The company has, of course, raised equity—a 25 per cent dilution—and fixed deposits as well as sold non-strategic investments in other Tata companies like Tata Steel Ltd. There still remains a funding gap that Edelweiss estimates at Rs 16,800 crore. Amish Shah, Auto Analyst at Antique Finance, feels that the best route for Tata Motors is to renew its bridge loan. “Any re-financing will be costlier.

Instead they should renew the loan,” he says Falling Freight Rates The economic slowdown is perhaps showing itself worst in the commercial vehicles (CVs) sector, the bread and butter of Tata Motors, accounting for 60 per cent of its volumes and 70 per cent of its sales. Shah of Antique points out that Indian domestic freight has fallen and number of trips by trucks has dropped to such an extent that many owners are now being forced to return their trucks to the financiers. “In such a situation, buying a new truck is out of question,” Shah says. CV sales have been falling since last October, and no major turnaround is expected before October.

Now a successful Nano would be no tender mercy for Tata Motors in the short term, as the higher the volumes go, overall profitability will be impacted by that much. Last fortnight, Tata clarified that the Nano wasn’t a personal “ego trip” for him. It’s also clear that it won’t be a profitable trip either, for some time to come.

Recession under the radar