Co-working spaces are offering start-ups a like-minded community and a feeling that they belong to something bigger.
By Sonal Khetarpal | Print Edition: November 6, 2016 The days of hogging the corner table at a coffee shop for hours together armed with a laptop and cappuccino, could well be passe for the budding entrepreneur. Start-ups and freelancers are ditching bean bags and bar stools for chairs and desks at co-working spaces that provide a conducive launchpad for their entrepreneurial journey.

Meet Om Kanwar who, after working for 15 years, left his job at Cadence Design Systems to start an online math learning platform Edugain. Strapped for cash, he decided to rent a small room in South Delhi as his office space. When he called in candidates for interviews, he ended up dodging questions about the office space and the nondescript location. Clearly, the tiny space wasn't helping attract good talent, even though they liked the job offered. "Female content writers wouldn't have agreed to join me if I was working out of a small office in some shady location," says Kanwar.

A premium salary package and ESOPs are no longer enough. Employees deem a decent pantry, meeting rooms and break-out areas as basic amenities in the workplace. However, it is not viable for cash-crunched start-ups to offer these facilities, given the skyrocketing rentals, advance deposits and uncooperative landlords.

Kanwar moved to a co-working space called 91springboard in Noida in April. It worked well for him. Due to his corporate background, he was used to being in open spaces, having people around, and the amenities taken care of. "None of these I could have afforded in my own office. It is like being a part of a bigger organisation," he says.

Co-working spaces are convenient because companies or individuals can pay as per use. If they expand their team or downsize, they pay for the workstations they actually use. Such flexibility relieves start-ups from the burden of admin work. "You can rest assured that you will never get good Internet connection unless you spend big bucks. There will be times when Internet is down and you will spend hours dealing with the telecom providers who aren't the most professional people," says Amarjeet Singh, Co-founder of energy analytics company Zenatix. His team worked out of Gurgaon-based co-working space Investopad for 17 months, before he set up his own office nearby.

While utilities may be the big draw for start-ups and individuals, co-working space providers don't make a sales pitch out of it. What they do oversell is the well-fostered curated community of people from diverse backgrounds and a pool of mentors for advice for the founders. Typically, a co-working space has an assortment of people that cuts across industries and professions. There are start-ups in education, advertising, technology; and freelancers who may be bloggers, lawyers or even social enterprises, and NGOs.

But you can't just walk in and set up shop. To maintain a certain quality of community, co-working space providers screen start-ups that express interest to work out of their space. Delhi-based CoworkIn's Founder, Yatin Thakur, ensures the team is a 'cultural fit', which he assesses through a quick meeting with the start-ups. "We don't judge them on their business or start-up idea, but ensure that our co-workers have complementary skills." 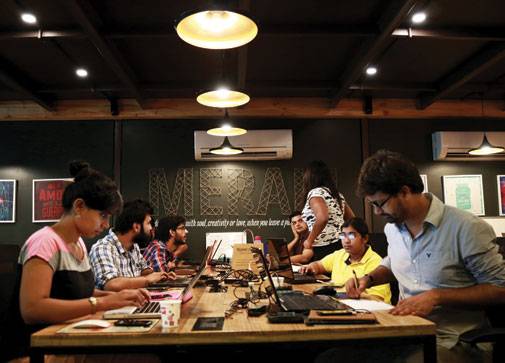 Innov8's Co-founder Ritesh Malik agrees. "It is not on first-come, first-serve basis. We curate start-ups on the basis of the value they can add to our community." There are 46 companies working out of Innov8's Connaught Place centre in Delhi, and Malik claims to have a waitlist of 200 members. At Innov8, only after scanning the QR code at the door can anyone enter the building. This, says Malik, is important as the space is open 24x7, seven days a week, and does away with the need for a security guard.

The curation seems to be working. Kanwar of Edugain shares that he met another education tech start-up TradeAcademy, founded by Prateek Singh, at 91springboard, which was working on a similar product. Each of them tweaked his offering so they became complementary to each other. "Now we pitch together to potential clients," Kanwar says. In fact, when they needed graphic designers, all they had to do was look around. "Since they are co-located, it is easy to work with them. I have also given them access to the data on my server," he adds.

Being in a co-working space also lets you bounce off ideas and get the right advice or feedback. "Everyone's quite busy, but you do get a sounding board to help validate your ideas," says Reeti Phalpher, Co-founder of Babydestination. Her team keeps seeking advice for the web product and content from the techies working out of CoworkIn in Delhi's Nehru Place. For first-time entrepreneurs, it offers a great deal of moral support. "Too much advice isn't bad at all. It is actually a motivation to work better," she says.

Ninad Shah, the 32-year-old founder of Areahop, working from Bangalore-based BHIVE, recounts an incident involving a database related issue. When his team couldn't solve it, three engineers from a company called Neogrowth stayed late to help with troubleshooting. "It was not their responsibility and yet they went out of the way to help us." Informal conversations with co-working companies, he says, also often yield useful feedback.

For some, such as Abhishek Rai, the founder of new media company Shack, being in the midst of people from diverse age groups and backgrounds serves as a reality check. He worked from his own office for five years before moving to 91springboard. "I was the king of my small kingdom. Here everyone is busy trying to solve a problem. No one cares who you are. This puts a check on your ego," Rai admits.

Mentorship sessions, workshops on legal and tax matters, and fun events like movie or board game nights, are common in co-working spaces to facilitate networking and knowledge sharing among member companies. When the writer visited the 91springboard in Noida, a panel discussion on real life challenges of an entrepreneur was in progress.

Shah of Areahop is a regular at these events, which see stalwarts such as Kris Gopalakrishnan, Co-founder of Infosys, Abhay Tandon, Former Associate Director at Tracxn, and former Chief Product Officer at Flipkart Punit Soni at BHIVE. "We get access to all the top mentors without having to pay or move out of our work spaces," Shah says. BHIVE claims to have hosted 430 events in the past 21 months, over its five locations.

So much networking can seem like a distraction, but Pranay Gupta, Co-founder of 91springboard, says events and interactions are run on opt-in mode. "If you want to socialise, great; if you don't, that's fine, but the option is always open."

There's a certain unwritten culture code followed by member companies, which renders a community set-up. Gupta says it manifests in the way new people are introduced, how community managers interact with them on a day-to-day basis, which helps them form the right connections. 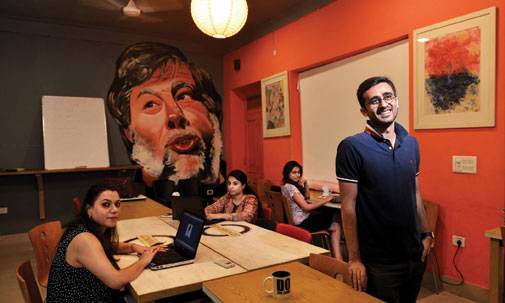 Yatin Thakur of CoworkIn has hosted people from Bangladesh and Japan as part of a coworking visa programme (Photo: Shekhar Ghosh)

Professor Gretchen Spreitzer, the faculty director for the Center of Positive Organizations at the Ross School of Business at the University of Michigan, has been studying co-working space trends. In her research, it has emerged that spaces that invest in having community managers have a better culture, which is more open and leads to more collaboration.

Bangalore-based BHIVE has 35 employees to manage its five co-working spaces in Bangalore and scale the business. "The extra manpower is so they don't get too busy with just managing the space, but also know the members well to understand their requirements and make the right connects," says its Co-founder Ravindra M.K. BHIVE also has an app and other online collaboration tools for members to interact, post queries, book meeting rooms, etc.

A brainstorming session can turn into a loud banter in minutes, distracting co-workers. According to Oxford Economics, 68 per cent of the 1,200 workers it surveyed this year across industries hailed a 'distraction-free environment' among their top three priorities for their workplace. Josh Bersin, Founder of Bersin by Deloitte, can't agree more. "One common complaint I constantly hear is not having enough conference rooms."

Co-working spaces, which actually encourage collaboration, are handling it smartly. Innov8 has installed a software based on IoT (Internet of Things) for decibel monitoring across its centres. 91springboard leverages its community managers at each hub to monitor the noise levels. A couple of users this writer spoke to said even if there are loud people around at times, it doesn't affect their productivity. 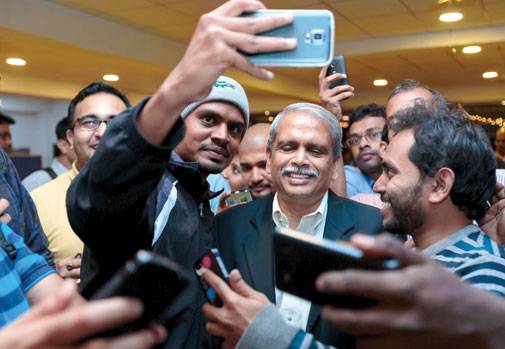 Infosys's Kris Gopalakrishnan interacting with start-ups at one of BHIVE's events (Courtesy: BHIVE)

They are also providing a combination of spaces at work - quiet rooms, meeting rooms, cabins and such. In its fourth location, BHIVE has 40 per cent of the space dedicated to sound-proof cabins, based on feedback from users. "We have started using modular furniture so workspace design can be modified as per demand," says Ravindra.

Even though viable, one of the common reasons companies move out of co-working spaces is economics. Aakriti Bhargava of Boring Brands moved out at 33 people. It got expensive for her to work out of such a space when the employee strength exceeded 25; plus she was keen on expanding her team. Most co-working spaces charge Rs 8,000 to 10,000 per desk for a month. But she misses the frills that came with working at 91springboard. "The networking sessions were great stress busters, and we could network without any effort. Also, I still can't afford the boardroom we had there."

However, the per capita cost to work out of a private office in a prime location would be higher per person, than what it would be at a co-working space.

Some like Varun Khaitan of UrbanClap, who worked from CoworkIn, believe there comes a time to move out. "If you need to grow your company, you need to push yourself a lot, stare at empty spaces for long hours and come to solutions," he says. This, he adds, doesn't happen in co-working spaces, which are buzzing with people and distraction is just a "hi" away.

Co-working space providers are addressing this by designing offices that are conducive for all kinds of users - from those seeking open desks to those who want a quiet space.

Currently, there are no examples of billion-dollar companies emanating from co-working spaces. But the future holds promise. The trend, says Spreitzer, has picked up only in the past four years. "These companies are still new and not much time has elapsed to reach the conclusion that they are not financially successful. There are, however, quite a few examples of start-ups that have flourished in these spaces, and of large companies sending their employees to work in co-working spaces," she says.

The co-working space is also attracting interest from bigger companies, especially ones looking to foray into a city or country. There are some who want to be amidst the start-up community for strategic reasons. For instance, the R&D team of the non-banking financial company Neogrowth, which is backed by Omidyar Network, Aspada Investment Company and Khosla Impact, works out of BHIVE to be connected to the tech community in Bangalore.