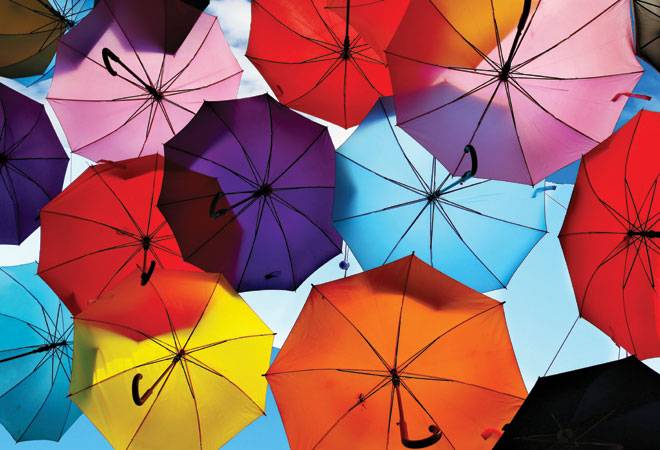 February 1, 2017 was a crucial day for Indian insurance: the day foreign reinsurance companies, for the first time, opened branch offices in Mumbai. It was the culmination of a process which began with the passing of the Insurance Laws (Amendment) Bill in March 2015, the same one which raised the cap on foreign insurers' participation in joint ventures with Indian companies from 26 per cent to 49 per cent. Among its other clauses, it also permitted foreign reinsurers to set up wholly owned branches in India. Though foreign insurance companies have been in India since 2000 - in joint ventures, with a cap of 26 per cent equity - there were no reinsurance companies among them. The sole Indian reinsurer so far was the publicly owned General Insurance Corporation (GIC Re). 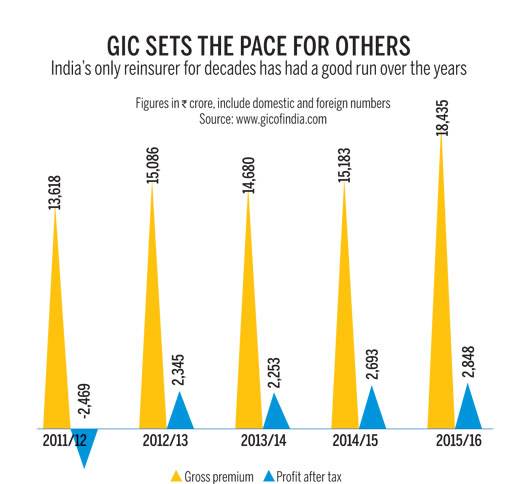 GIC Re, with a turnover of `18,435 crore in 2015/16, handles around 52 per cent of the total reinsurance business in the country. The rest is already spread across global reinsurers, but with many of them now expected to set up branches in India, the business is likely to get a big fillip. Following the amendment, the Insurance Regulatory and Development Authority of India (IRDAI), in October 2015, released guidelines on the registration and operation of foreign reinsurers in India - conditions they would have to satisfy to qualify for certification, followed by a three-stage clearance process they would have to undergo. IRDAI has since come out with a number of further clarifications and guidelines.

So far, Swiss Re (Switzerland), Munich Re and Hann- over Re (Germany), Scor Se (France) and Reinsurance Group of America (RGA) Life Re have passed all the three stages and set up their branches from February 1. A few others, including Gen Re (part of Warren Buffett's Berk- shire Hathaway Group) and XL Catlin, have already received final licence and started their operations. Axa (France) has also received partial licence. Lloyd's of London, which is not a reinsurance company but an insurance and reinsurance market, is also set to enter (IRDAI has issued separate guidelines for Lloyd's). In addition, GIC will have a domestic competitor as well, which has been given clearance - ITI Re, owned by Sudhir Valia's Fortune Financial Services. "Market participants have greatly appreciated the openness and willingness IRDAI has shown to understand reinsurers' challenges and create a welcoming environment for their entry," says Rohan Sachdev, Partner and Leader - Financial Services Advisory Services, EY.

The insurance sector in India is growing at a healthy clip - the life segment at 11.84 per cent in 2015/16, the non-life at 13.81 per cent - against a global average of 4 per cent and 3.6 per cent, respectively, in 2015. There are 54 companies operating - 24 in life insurance, another 24 in non-life, five dealing solely in health insurance, and GIC. But the absolute size of the market, at $71.78 billion, is small compared to developed countries, as is insurance density and penetration. "The key challenge for us will be to offer the most relevant and innovative solutions for our clients, develop new products and help them grow their businesses," says Hitesh Kotak, Chief India Representative, Munich Re.

The retention ratios of Indian insurers - the portion of the risk they keep to themselves, rather than pass on to the reinsurer - are also relatively high, lowering the scope of reinsurance business. With private insurance only 15 years old, good quality, adequate data for pricing, modelling and underwriting of products is also lacking across the entire insurance value chain. "We need to work collectively to enhance underwriting standards, pricing and wording of policies," says Shankar Garigiparthy, CEO (Designate), Lloyd's India. "We also need to evolve a transparent dispute resolution mechanism to ensure that the Indian market flourishes in coming years." 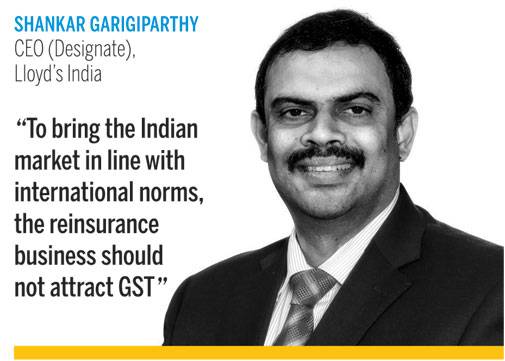 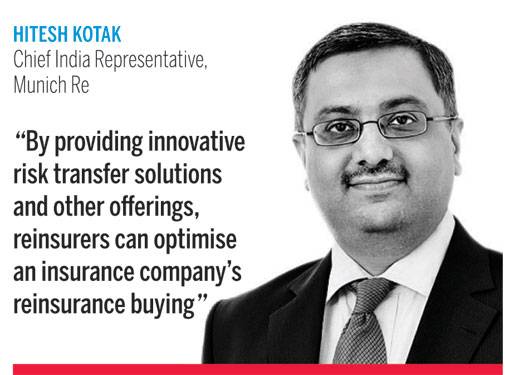 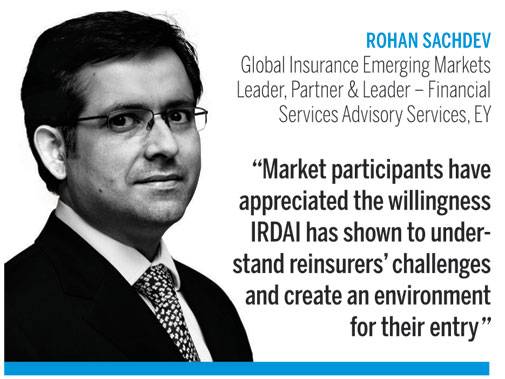 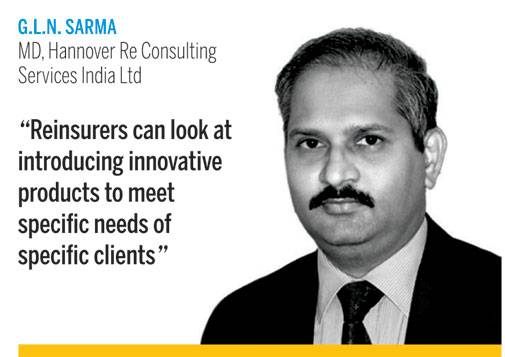 Taxation is another worry for the foreign reinsurers, since there are a number of areas where clarity is yet to be provided - mechanisms for computing business profits of foreign branches, the service tax insurers will have to pay on reinsurance premium, the applicability - or otherwise - of service tax and Goods and Services Tax (GST) on reinsurance brokers, and more. Will Lloyd's, as a reinsurance market, have to pay GST? "To bring the Indian market in line with international norms and enable Indian reinsurers to compete on a level-playing field, the reinsurance business should not attract GST," says Garigiparthy of Lloyd's.

Global reinsurers have been attracted by the potential of the Indian market, but if they are taxed at around 40 per cent, as most foreign entities are - way higher than reinsurers in Singapore or the UAE - they may well limit their investment in India as well as scale down operations in the future if the global economy takes a hit. "If the government wants to build a robust reinsurance industry, it has to think of some tax concessions," says an industry insider, not willing to be identified. The doubt related to repatriation of surplus to the parent company by the branches has also not been fully resolved.

There is also the matter of the "order of preference" that IRDAI has prescribed. It has divided foreign reinsurance branches into two categories - those retaining at least 50 per cent of the reinsurance business they get (while passing on the remaining risk to their parent companies), and those retaining at least 30 per cent. Initially, IRDAI had ruled that the first choice of insurance companies should be an Indian reinsurer, but after strong protests from prospective foreign entrants, has put Indian reinsurance companies and foreign ones in the first category on par. Insurance companies can choose among any of them, but only after offering reinsurance to three companies in this category and being turned down can they move to the second category. Cross-border reinsurance - or reinsurance with global companies that have not opened branches in India - will henceforth be allowed only after both categories of foreign branches within India have declined. Even so, much of the nitty-gritty related to "order of preference" has yet to be spelt out, and is being anxiously awaited by foreign reinsurers, who are wondering to what extent the hands of Indian insurers will be tied.

Global insurers have also been allowed to set up branch offices in special economic zones (SEZs) - called International Finance Service Centres (IFSCs) - but IRDAI has issued a separate set of eligibility criteria and guidelines for these. "There is lack of alignment between the reinsurance regulations for the onshore market and the IFSC zone leading to lack of clarity," says Sachdev of EY. "If India is to develop as a reinsurance hub, this needs to be sorted out."

With foreign reinsurers bringing in their expertise, the primary insurance market is also expected to expand. The digital revolution and other major technological changes have increased the scope of insurance, with new kinds of covers - cyber liability, sharing economy-related liability, etc., - being developed worldwide, which the foreign entrants could bring to India as well. Their presence will gradually improve existing data collecting and modelling techniques, introduce global practices in risk management and claims management to benefit the entire industry and raise customer confidence. "Foreign reinsurers will need to work closely with existing insurers and intermediaries to educate the market participants," says M. Ravichandran, President - Insurance, Tata AIG General Insurance Company. "Product innovation will be the key to their success. Leveraging technology to reach the mass market and training local talent should also be their goals."

A number of insurance lines, currently at a nascent stage in India, are likely to grow following the entry of foreign reinsurers. Coverage for natural disasters remains extremely low, despite the floods and earthquakes of the recent past. Such cover is expected to increase, thereby reducing the financial hit - in paying compensation - the government takes following any such calamity. Similarly, taking liability insurance or the insurance companies, and even individuals take to bear legal costs in case they are sued - hardly exists in this country, but a beginning could well be made now. Liability insurance, as it operates in developed markets, can cover a company's directors and senior officers for any errors or omissions inadvertently made, matters of product and public liability, product recalls, and more.

"Sectors such as liability, aviation and energy are likely to see significantly higher growth than others," says Ravich-andran of Tata AIG. "Health, agriculture and microinsurance are other areas which will get a lot of interest from reinsurers." In agriculture, the Pradhan Mantri Fasal Bima Yojna, announced in January 2016, and intended to extend crop insurance much further than before, is a major opportunity for the new reinsures. Title insurance, or insurance against any financial loss due to defects in the title deed to a property (and related issues), is also being considered by IRDAI. "As the regulator allows introduction of new products like title insurance, new areas of growth for the reinsurers will open up," says Sachdev of EY.

Some reinsurers sound a note of warning on getting too competitive in an already low-cost market. "By providing innovative risk transfer solutions and other offerings, reinsurers can optimise an insurance company's reinsurance buying," says Kotak of Munich Re. "This would be a better way of bringing down reinsurance costs rather than competing through predatory pricing for traditional covers." Since the Indian market is relatively small and dominated by retail insurance, another pitfall could be that of reinsurers writing lines of business they would traditionally not have participated in, simply to justify their investment in India. "Maintaining underwriting discipline will be a huge challenge in India, particularly against rising expenses," says Garigiparthy of Lloyd's. He also warns against the proliferation of brokers. "It is common practice in India for multiple brokers to seek reinsurance quotes on the same risk," he adds. "We would encourage brokers to collaborate and agree upon a framework as to who is the 'broker of record' relating to a particular placement, in line with international best practices."

At the same time, Indian branches should be allowed sufficient autonomy - if the parent company tries to remote control Indian operations, it will lose the benefit of the access to local data and expertise. "It is imperative that reinsurers provide the right blend of their technical pricing knowledge, international experience and local knowhow of the risks," says Kotak of Munich Re. "A strong underwriting backed approach is crucial for reinsurers as they don't have the investment income advantage of primary insurers to guarantee sustainability." Reinsurers should also prepare to be patient. "It is essential to carry out full due diligence before applying for a licence," says Garigi-parthy. "But once a reinsurance company has entered the market, it is extremely important for it to remain committed for the long term."

"GST will increase productivity and efficiency"